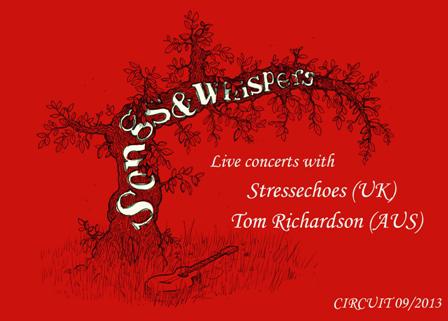 From September 13th to October 6th the international music network sets up the ninth CIRCUIT of 2013.The following artists will be part of the tour across north-western Europe:STRESSECHOES (Cheltenham, UK) www.stressechoes.comStressechoes are a four-piece acoustic act from Cheltenham in the southwest of England. Founded in 2008 when introduced by mutual friends, singer-songwriters Alex Petrie and Andrew Corey realised both a mutual love of similar music and an ability to gel together in songwriting and vocal harmonies. They began to write material, soon adding Stephen Osmond, another singer-songwriter, who quickly converted to the bass guitar and drummer Ben Hawling. In 2011, Stressechoes released their debut EP 'Bitter Acoustic Noise' to extremely positive reviews and local/ national radio airplay. The follow-up in 2012 'Goodnight, Impossible' focused on darker themes including religion, murder, loss and desperation. Their music has been described by the BBC as “…heart-on-sleeve storytelling, supported by beautiful understated music”. Making the shortlist for several unsigned awards and having completed succesful radio appearance and headline acoustic stage slots in the UK, Stressechoes are incredibly excited to be touring Europe in 2013.Influences: Neil Young, Simon and Garfunkel, Nick Cave and the Bad Seeds, I am Kloot, The Cure, Joy Division"Stressechoes' songs are a triumph of heart-on-sleeve storytelling supported by understated, beautiful music." - Stephen Morris BBC Introducing GloucestershireTOM RICHARDSON (South West Victoria, AUS) www.tomrichardsonproject.comWith so many talented artists vying for a spot on the world stage, it is becoming increasing more difficult to find somebody doing things a little differently... Tom Richardson is that artist. An adventurous yet humble nomad, in the past 18 months alone, Tom has performed in 14 different countries across the globe. Tom uses the latest in loop pedal technology to create a wall of sound, overdubbing four part vocal harmonies, complicated percussion grooves and lead and rhythm guitar parts, all live on stage. While live looping may not be a new phenomenon, rather than focusing on laying down one continuous groove, Tom dances around the stage, using his feet to create different song sections, starting, stopping and layering various instruments as he goes. Following a busy Australian summer of festivals, described as the “best opening to a festival yet!” (Port Fairy Folk Festival), Tom Richardson once again took his music to audiences around the world. Armed with his infectious personality and contagious melodies, Tom singlehandedly entertained audiences from major Canadian festivals, dozens of American and European bars, to highland village tribes in Fiji. Tom heads into 2014 with new solo looping show, a large swag of songs and a guitar case full of stories. Releasing his debut double album ‘Guide Your Ship’ in 2011 with his full band, the Tom Richardson Project, Tom collected numerous national songwriting and blues music awards. Combining his love of music, travelling and the ocean, Tom also loves finding the time whilst travelling the world to empower ambitious, wheelchair bound youths through adaptive surfing and skating programs, through the organisations ‘Ocean Healing Group’ and ‘Sharing The Stoke’.Influences: Elmore James, Muddy Waters, Willie Dixon, Robert Johnson, Dave Matthews, City & Colour, Damien Rice, Ray LaMontagne“Tom has huge potential and the proposed ‘project’ is timed perfectly to further build his creative work and inject another critical boost to his career in music. I will eat my dinner suit if this project is not a roaring success!” Jamie McKew – Festival Director Port Fairy Folk FestivalFind all tour dates on http://songsandwhispers.blogspot.de/2013/08/circuit-092013-1309-06102013.htmlSince January 2009 “Songs & Whispers”-concerts take place every month in different venues around Bremen. International and local artists are fascinating a growing audience in special venues like historical cinemas, theatres and cozy bars. The musicians’ genres vary from Alternative Folk, Alternative Country to Americana, Bluegrass or Singer-Songwriter. The atmosphere of the concerts is changing with the choice of venues and lives from the artists’ interaction with the audience. An important characteristic of Songs & Whispers is that most concerts are played acoustic or semi-acoustic.Songs & Whispers is aiming at creating a worldwide network of musicians and an exchange of ideas from different artists and nations. We are presenting a selection of international artists and local supports every month. Furthermore we try to be a platform for other musical organisations like schools of music in letting them perform in our supporting program. www.songsandwhispers.comSongs&Whispers c/o ps promotion Cuxhavener Straße 7 28217 Bremen Germany

06-27-2014 | Arts & Culture
SONGS&WHISPERS
"SONGS & WHISPERS" - latest Release: Riddle & The Stars (AUS/USA) "This Is Happe …
Three continents, two bands, one album! Riddle & The Stars is a collaborative project between the Australian singer/songwriter Ben Riddle and The Fallen Stars, an American rock band from Southern California. The three of them met each other on their “SONGS & WHISPERS” - CIRCUIT TOUR 07/2013 in Germany, where they shared an apartment and about half of the tour dates. They started to play music together, joined each other on
08-27-2013 | Arts & Culture
SONGS&WHISPERS
Powerful world music and a soft songwriter - cultural clash in "SONGS & WHISPERS …
Jeconte & The Mali Allstars serve a powercocktail full of energy, Lewis Knutsen simply leans on his deep, soft voice - we mix it! And we promise: it matches. "SONGS & WHISPERS" is looking forward to a special experience in CIRCUIT 08/2013 (16.08.-08.09.)! JECONTE & THE MALI ALLSTARS (Bamako, ML) www.themaliblues.com To understand the story of Mali Blues one must go back to a simpler time; a time when one could walk freely
09-06-2012 | Arts & Culture
SONGS&WHISPERS
"SONGS & WHISPERS" CIRCUIT 08/2012 "Germany meets Australia"
From August 17th to September 9th the international music network "SONGS & WHISPERS" sets up the eigth CIRCUIT of 2012. The following artists will be part of the tour across north-western Europe: MARK MUSTANG (Kassel, GER) www.glattbuegler.de/MARKMUSTANG.htm He sounds like a grooving band, but it’s just him! Mark Mustang is jamming with himself, with his six string acoustic guitar and his voice. He sounds like playing guitar, bass and drums at the
04-23-2012 | Arts & Culture
SONGS&WHISPERS
"SONGS & WHISPERS" arranges CIRCUIT 04/2012 (13.04. to 06.05.2012) with A Jigsaw …
The international music network "SONGS & WHISPERS" present the fourth CIRCUIT of 2012. The Portuguese band A Jigsaw will tour togerther with Sleepwalker's Station across north-west Europe. Information about the artists: A Jigsaw (Coimbra, PO) http://www.ajigsaw.net A Jigsaw is Portuguese Indie-Folk band consisting of the three multi-instrumentalists musicians Joao Rui, Susana Ribeiro and Jorri. The band is named after the Belgium band dEUS song “Jigsaw You”. In 2007 they released a concept album called Letters From

09-21-2018 | Arts & Culture
PR for RETROSPECT
“Retrospect” by Tom Tottis is published
ISBN #978-1787197305 “Retrospect” by Tom Tottis is published A family saga spanning three generations from Budapest in the 1920s to London in the 1990s About the Book: Based on a true life story, RETROSPECT is about human fortitude, chronicling the life of a Hungarian family, eventually reduced to just mother and son, and their struggle during Nazism in the early 1940s, followed by tyrannical Communism, the Hungarian Uprising in 1956, and the aftermath. From Budapest
07-09-2018 | Business, Economy, Finances, B …
ReportsWeb
Automotive Telematics Market 2018-2022 Global Key Companies - Trakm8 Holdings, T …
Telematics is the field of science in which the long-distance transmission and communication between computer-based information is arranged. In simple terms, receiving, storing and sending of computer based information is performed with the help of telematics system. The technology of telematics is generally used in different types of vehicles. Automotive telematics is the technology that deals in ensuring the safety of the car and its passengers by providing diversified computer-information based
05-24-2016 | Advertising, Media Consulting, …
Amscreen
AMSCREEN TERMINATES AGREEMENT WITH TOM GODDARD’S DIGICOM
Amscreen regretfully announces that it has today terminated its sales agency agreement with Digicom Out Of Home Digital Media Limited (“Digicom”) and temporarily suspended the advertising service on its network of forecourt screens. This follows the filing of a Notice of Intention to Appoint an Administrator by Digicom on Friday 13th May 2016. We were informed by Digicom shortly after this that payments due to Amscreen under the terms
02-05-2013 | IT, New Media & Software
Omniplex Ltd
Tom Kuhlmann explains ‘interactivity’ at Omniplex seminar
Tom Kuhlmann, one of the world’s best known e-learning designers and currently number three in the ‘World’ list of the Top Ten Movers and Shakers in corporate online learning, discussed the ‘what, when and how of interactivity’ with an invited audience at The Cellar at Vinopolis, on London’s south bank, at the end of January. Hosted by Omniplex, an official certified Articulate partner and an Articulate Centre of Excellence, as a
04-22-2011 | Arts & Culture
Aurel Scheibler / ScheiblerMitte
Tom Chamberlain : Some Other Time
Tom Chamberlain Some Other Time Opening: 29 April 2011, 6 - 9 pm Duration: 30 April – 24 June 2011 Location: Aurel Scheibler / ScheiblerMitte Charlottenstraße 2 (in the Alley) 10969 Berlin The British artist Tom Chamberlain (*1973) engages the simplest of artistic means to achieve an unusually high degree of visual complexity
05-16-2008 | Industry, Real Estate & Constr …
PMForum, Inc.
Tom Taylor named PM Ambassador™ in UK
APM Fellow Tom Taylor joins the PM Ambassadors™ Speakers Bureau in England Dallas, Texas — PMForum, Inc. is pleased to announce that Tom Taylor, former Chairman and a Fellow of the Association for Project Management (APM) in the UK, has joined the PM AmbassadorsTM Speakers Bureau. Based in London and with over 30 years of front-line project management experience, Tom advises organizations and speaks on project management throughout the UK.
Comments about openPR
Your portal is fast, simple, and easy to use. Others may have more functions but they also demand more editing time, you have to preformat the text in order to achieve a good result etc. I think openPR is really fantastic!
Andreas Knepper, wallmedien AG