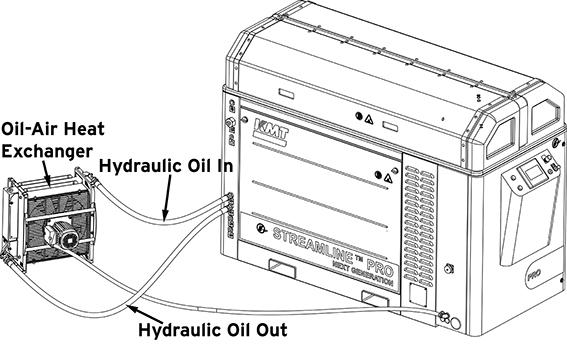 Components of an Oil/Air-Cooling System

Which cooling system fits best for which high pressure pump installation for waterjet cutting? When operating a high pressure pump for waterjet cutting, it is crucial to run a reliable cooling system as some vital components of the pump may be damaged if the temperature of the hydraulic oil rises above a certain point. Therefore, KMT Waterjet high pressure pumps carry out an automatic shut-down as soon as the oil gets too hot. For its pumps, KMT recommends an operating temperature of 40-45°C (104-113°F). Concerning the cooling system, the company offers a few alternatives: Water cooler, air cooler or a combination of both. Which of these alternatives is the best one depends on the installation parameters of each individual waterjet cutting machine.To answer the question which of the alternative cooling systems is suitable for a particular waterjet cutting application, environmental influences as well as the installation conditions have to be taken into consideration. Basically, the air cooler only works reliably up to an ambient temperature of about 30°C (86°F): For the efficient operation of such a system, the ambient temperature has to be at least 10°C (50°F) cooler than the temperature of the hydraulic oil. If the thermometer rises above this value, the cooling power decreases rapidly. Indeed, the high pressure pump still runs at higher temperatures – the automatic shut-down does not occur until the oil reaches 62°C (144°F); however, exceeding the recommended maximum temperature may have a negative effect on the lifetime of the high pressure seals in the intensifier.Advantages of the Air Cooler Anyway, the air cooler has its advantages, too. The water cooler as the standard option for KMT STREAMLINE high pressure pumps may be slightly cheaper in the initial purchase, however, this price advantage is quickly put into perspective: If a water cooler is installed without an additional chiller for the cooling water, further operating expenses are incurred as the water directly goes to the drain after one turn in the cooling circuit,. A 50 hp high pressure pump for example can have a cooling water consumption of 10 l/min. Depending on water costs and running times, the system creates operational costs which can be avoided using an air cooler. These costs can be saved by reusing the water. To do so, the waterjet cutting machine operator has to connect an external chiller to cool down the used water before reintroducing it into the cooling circuit. Yet, the costs for such a chiller may actually amount to three times the additional costs of the air cooler. So considering the total costs, the air cooler is the more cost-effective alternative after all.Regarding the installation effort, the air cooler also comes out front. This option provides the buyer with a ready-to-use system. In contrast, installing the water cooler necessitates either a set-up of the chiller or of the drain for the cooling water. So an air cooler is particularly advantageous for smaller waterjet cutting companies which have no access to an already existing cooling system. Additionally, the exit air from the air cooler can be used to heat up small buildings.Advantages of the Water Cooler A water cooler may pay off in case the high pressure pump operator can dispose of cheap water, for example a river or some other water bodies close to the location of the waterjet cutting machine. Additional costs still cannot be completely avoided though: When feeding the water cooler via a body of flowing or standing water, an additional pump probably becomes necessary to reach the minimum inlet water pressure of 2.5 bar.However, in regions regularly and permanently reaching 30°C (86°F) ambient temperature or more, there is no alternative to a water cooler as the functionality of an air cooler meets its natural limitations. The same is true for large high pressure pump networks consisting of 4 to 5 or more machines. If air coolers are used in such cases, they will create air turbulences which may be more or less strong depending on the type of building and which delimit the cooling system’s efficiency. Additionally, the large amount of exit air created by the many systems heats up the environment and makes a cooling down just with air impossible.What’s the best System? To put it in a nutshell, the air cooler is the more cost-effective alternative compared to the water cooler regarding purchasing and operating costs, but it cannot be used in every circumstance. For high average ambient temperatures or large high pressure pump networks, water coolers are the more reliable option. The highest flexibility though is achieved with a combination system as KMT offers for its high pressure pumps. Particularly in regions with occasional temperature peaks of above 30°C (86°F), the cost-effective air cooler can be combined with the more reliable water cooler. In such a combination system, the air cooler is the main cooling system and the water cooler is switched on only if needed.About KMT Waterjet Systems KMT Waterjet Systems is a leading multinational manufacturer of components for waterjet cutting systems. The company develops solutions for a wide range of industries and applications. Since 1971 the company has been dedicated to long-term customer relationships. Continuous investment in innovation has made KMT Waterjet Systems the market leader in the waterjet cutting industry. High pressure pumps, cutting heads, abrasive systems, high pressure tubes, original spare parts and a global service network are among the key products and services of the company.KMT GmbH Ralf kleine Brörmann Hohe Strasse 4-6 61231 Bad Nauheim Deutschland Phone: +49 (0) 6032 / 997-126 Fax: +49 (0) 6032 / 997-270 E-Mail: ralf.broermann@kmt-waterjet.com Internet: www.kmt-waterjet.com

02-07-2013 | Industry, Real Estate & Constr …
KMT Waterjet Systems
Quick and economical waterjet cutting with ABRALINE Advanced
(Bad Nauheim, 2013-02-06) With the ABRALINE abrasive bulk transfer system, KMT Waterjet Systems offers a solution to enable quick and economical waterjet cutting. The latest addition to this product line is the model version ABRALINE Advanced which features a larger abrasive silo and an optimized design. Thus, it is able to reliably feed demanding waterjet cutting applications. The use of such a system pays off: When cutting with a waterjet,
09-11-2012 | Industry, Real Estate & Constr …
KMT Waterjet Systems
Focus on Abrasive Cutting
In the process of abrasive waterjet cutting, the focusing tube is a vital component. After all it is in this tube where high pressure water and abrasive are focused to an efficient cutting jet. During this procedure, the physical processes in the tube crucially affect the final speed and precision of the cutting jet as well as the kerf width at the workpiece. However, which factors influence the functionality of