HopeMedia: "The Adventist Church in Solidarity with the Ukrainian Catholic Church" 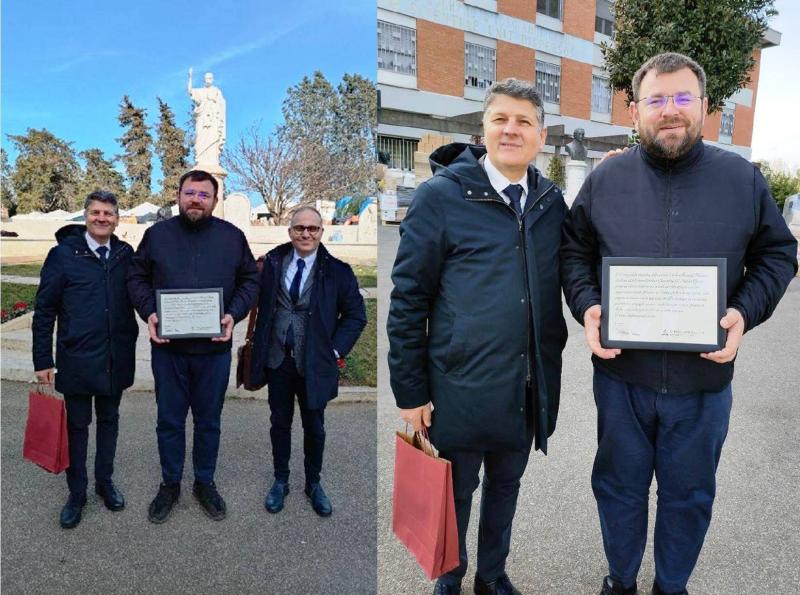 Hope Media is the official news agency of the Seventh-day Adventist Church in Italy. A March 15, 2022 headline from HopeMedia reads: "The Adventist Church in Solidarity with the Ukrainian Catholic Church." To stand in solidarity with someone, as in the case of Catholicism, means to be in "unity or agreement of feeling or action, especially among individuals with a common interest." One can certainly express regret for the suffering and lives lost in any war. We can certainly show concern for those who have been impacted by any crisis. We should feel this way for all victims. But it is a completely different matter for Seventh-day Adventist leaders to issue statements expressing solidarity with the Ukrainian Catholic Church, which is in communion with the Papacy and recognizes Pope Francis as its spiritual leader.For Seventh-day Adventists to make a statement of solidarity with Catholicism has theological implications that are designed to establish a vague, non-doctrinal spirituality. This is a display of appeasement to Rome. They are blurring the lines between Adventists and Catholics. These acts of solidarity always tend to water-down the distinctiveness of our unique Adventist message.It would have been better and more honest for our church leaders to say "we stand with all those who are suffering in this conflict in Ukraine" rather than stating "we are in solidarity with Catholicism." No one is against standing with the persecuted. However, by emphasizing and drawing attention to our willingness to stand in unity with Catholicism, we bury the fundamental and theological differences between the two faiths and project a false impression of Adventism to the world.Click to read the full story: http://adventmessenger.org/hopemedia-the-adventist-church-in-solidarity-with-the-ukrainian-catholic-church/Contact: Andy Roman, Publisher Address: Advent Messenger, PO Box 96, Dover, OK 73734 Phone: (888) 299-2119 Website: www.adventmessenger.org Email: adventmessengers@gmail.comAbout: Advent Messenger provides news and commentary on current events, top stories, social trends and political and religious events. For more news visit www.adventmessenger.org

You can edit or delete your press release HopeMedia: "The Adventist Church in Solidarity with the Ukrainian Catholic Church" here

06-23-2022 | Leisure, Entertainment, Miscel …
Advent Messenger
Loma Linda University Promotes the Ancient Eastern Meditation Arts of "Sunset Yo …
The following message was posted on Loma Linda University's Instagram page: "What a FUN event! People were lined up to participate in the Fitness Frenzy Sunset Yoga on April 13." Seventh-day Adventist institutions should be much more cautious when it comes to promoting eastern meditations on their social media pages or allowing them on their campus. Many Christians today regard yoga as merely another form of exercise, but it is
06-23-2022 | Leisure, Entertainment, Miscel …
Advent Messenger
Seventh-day Adventists in Spain join the Jesuits in an ecumenical event called " …
On May 28, 2022, DEIA, a daily newspaper in Basque Country, an autonomous community in Northern Spain, published a story about an "inter-religious celebration" that included "prayers," "songs," and statements about "peace" and "love." The DEIA newspaper reported on the ecumenical event as follows: "The event began at 7:00 p.m. with a Buddhist dance for peace … after which the moment called for peace … an inter-religious celebration was held with
06-23-2022 | Leisure, Entertainment, Miscel …
Advent Messenger
The Elizabethton Star in Tennessee published the following headline: "Sunday is …
The Elizabethton Star is a secular newspaper in Tennessee that has been in circulation since 1926. They have both a print edition and an online edition. On May 9, 2022, the Elizabethton Star published an article titled "Sunday is the Lord's Day." It went on to feature a quote from the late Billy Graham emphasizing the significance of keeping Sunday holy. Notice what they said: "How wonderful it would be to
06-23-2022 | Leisure, Entertainment, Miscel …
Advent Messenger
Sunday will be a Day of Rest in the Muslim State of Johor in Malaysia
The world is lining up and adjusting to the new economy, which will recognize Sunday as a day of rest for everyone. In Johor, Malaysia, Islam is the official religion. For many years, Friday and Saturday were their days of rest. They now intend to include Sunday as one of their work-free rest days. This shift follows the current popular trend of incorporating a four-day work week to give employees

05-19-2021 | Leisure, Entertainment, Miscel …
Advent Messenger
The Seventh-day Adventist Church in Spain has Fully Committed Itself to Laudato …
The Spanish Union of Churches Conference is the headquarters of the Seventh-day Adventist Church in Spain. Its official news magazine is called Revista Adventsita España. Esther Azón, co-editor of Revista Adventista España, recently wrote a short article and provided a link to a 102-page report revealing that Seventh-day Adventist institutions within her union have been participating in government sponsored, ecumenical, climate change initiatives. These initiatives are promoting and implementing the
01-26-2021 | Leisure, Entertainment, Miscel …
Advent Messenger
Adventist Health Allows its Physicians to Perform ‘Gender Transition’ Servic …
Adventist Health allows its physicians to perform gender affirming surgeries such as mastectomies and hysterectomies for transgender men (women transitioning into men) at its facilities. Also, “within” the Adventist Health “system,” physicians can provide gender-affirming hormone therapy. This information was disclosed by the California State Attorney General’s Office. All of this came to light as a result of Adventist Health’s plan to take over Delano Regional Medical Center in 2019. Because
12-11-2020 | Leisure, Entertainment, Miscel …
Advent Messenger
Another Adventist Institution Just Received Funding from Abortion Money
Seventh-day Adventist institutions have a long history of receiving money from the abortion business. Different news reports have revealed that institutions such as Loma Linda University and La Sierra University have received funding from abortionist, Dr. Edward C. Allred. [1] Dr. Allred has claimed to have personally performed more than 250,000 abortions. At one point, his abortion clinics performed 1/3 of all abortions in California and generated tens of millions
09-05-2020 | Leisure, Entertainment, Miscel …
Advent Messenger
Stop the Roman Catholic Indoctrination of our Seventh-day Adventist Youth in Eur …
The Taize Pilgrimages are annual ecumenical gatherings created for young people. About 20,000 young people attend each of the Taize Pilgrimages organized by the Roman Catholic Monk, Brother Alois. Their non-doctrinal unity of brotherhood is in line with the Vatican’s agenda on ecumenism. Pope Francis loves this religious order. Prayers, chanting, singing and sentimentality form the perfect faith without creeds where everyone can unite. Francesco Mosca is the Seventh-day Adventist
08-26-2020 | Leisure, Entertainment, Miscel …
Advent Messenger
An Independent Seventh-day Adventist Media Ministry is Being Censored for its Co …
Conservative groups and opinions are being targeted on social media platforms. Big tech companies such as Google, Facebook and Twitter are censoring people for expressing socially conservative views or for sharing content that does not contain a certain politically correct tone. Tyrannical governments are now in bed with tyrannical media giants. The goal is to control the information. A small group of people want to determine what is and what isn’t
03-26-2020 | Leisure, Entertainment, Miscel …
Advent Messenger
While Pope Francis Venerates Mother Earth, Adventist Health wants You to Connect …
Pope Francis is attributing the current global crisis to man's damage to the environment. On Sunday, March 22, 2020, Pope Francis did an online interview with the journalist Jordi Evolve. The Pope was asked about the condition of our planet and if the current global crisis was nature's judgment upon humanity. In a recent video the Pope responded by venerating nature with his pantheistic philosophies: "There's a saying that you surely
Comments about openPR
OpenPR is clearly structured and remains true to its principle of confining itself to the essential parts. OpenPR has proven to be a very good and reliable partner to our media agency: Within the shortest time the releases are online and go down well with the media representatives. The success of OpenPR is reflected in the steadily increasing number of press releases. It is good that OpenPR exists!
Ursula Koslik, Director Marketing & PR, F+W Hamburg