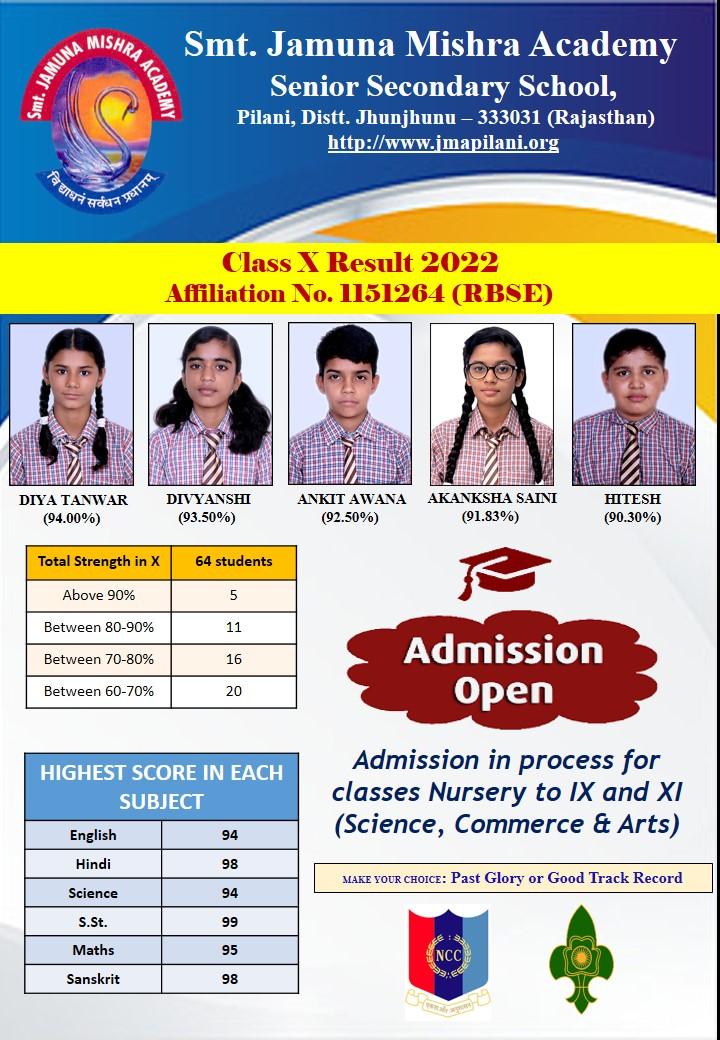 Smt. Jamuna Mishra Academy JMA popularly known as school with year after year 100% results established in the year 2004 is presently one of the most sought after schools at Pilani considered as Oasis in the desert state of Rajasthan. It is a matter of great pride that alumni of JMA are presently pursuing higher education in various institutions which include Institution of Eminence BITS Pilani and second best women's university in the world NAAC A++ UGC Category1 Banasthali Vidyapith. Out of 64 students who appeared in RBSE Class X, 5 students scored above 90%, 11 students scored between 80-90%, 16 scored between 70-80%, 20 students scored between 60-70%. The highest mark in each of the subjects namely Mathematics - 95%, Science - 94%, Social Studies - 99%, Sanskrit - 98%, English - 94% and Hindi was 98%. Hard working student Diya Tanwar bagged the top position with 94%. Other toppers include Divyanshi (93.5%), Ankit Awana (92.5%), Akanksha Saini (91.8%) and Hitesh (90.33%). While 52 students had scored first division, 11 students scored second division. Principal Mrs Booma Natarajan congratulated all the students and urged them to march ahead and emerge as dreamers, performers and achievers in coming times. Principal also thanked all parents for their wholehearted cooperation and the team of teachers and all staff of school for their dedication to ensure that the highest standards were maintained at all times especially the corona virus era which required technology based delivery. On 14 June 2022, JMA is organizing a colourful function at 8.30 AM in the school to felicitate the class 10 students.For more details about JMA Pilani see http://www.jmapilani.org/Default.aspxMrs Booma Natarajan, M.Sc., M.A., B.Ed. Principal, Jamuna Mishra Academy - JMA Pilani Rajasthan 333031 India Phone 91-1596-242314 Email booma_pilani at yahoo.co.in Website: http://www.jmapilani.org/Default.aspx FaceBook: https://www.facebook.com/JMAPilaniRajasthanRank1/About JMA Pilani: Jamuna Mishra Academy - JMA Pilani is a Co-educational English Medium School with Experienced Teachers, Spacious Classrooms and Modern Amenities designed to impart Quality Education combined with All Round Personality Development and lay the Best Foundation for the Child's Future. While the school admits both boys and girls, the girl student enrollment has been steadily rising every year and is presently nearly 50% of the total strength. Right from its inception, JMA Pilani has embarked on a rich tradition of celebrating various days of national and international significance and festivals which makes it a cut above the rest schools in Pilani. The school has for boys and girls Scout and NCC, girls' band which has been winning laurels every year. NCC cadets of JMA Pilani have also been selected for participation in Republic Day Camp RDC and Shivaji Trail Trek. Yoga, Karate, Painting and Music are not just part of school routine but a way of life for the students. It is a matter of great pride that JMA Pilani is referred popularly as the school with 100% Results on account of outstanding results year after year in Board of Secondary Education Rajasthan RBSE Class X and Class 12. For more details about JMA Pilani see http://www.jmapilani.org/Default.aspx