Of bugs and rabbits - Release of Tradesignal Online Terminal Version 7 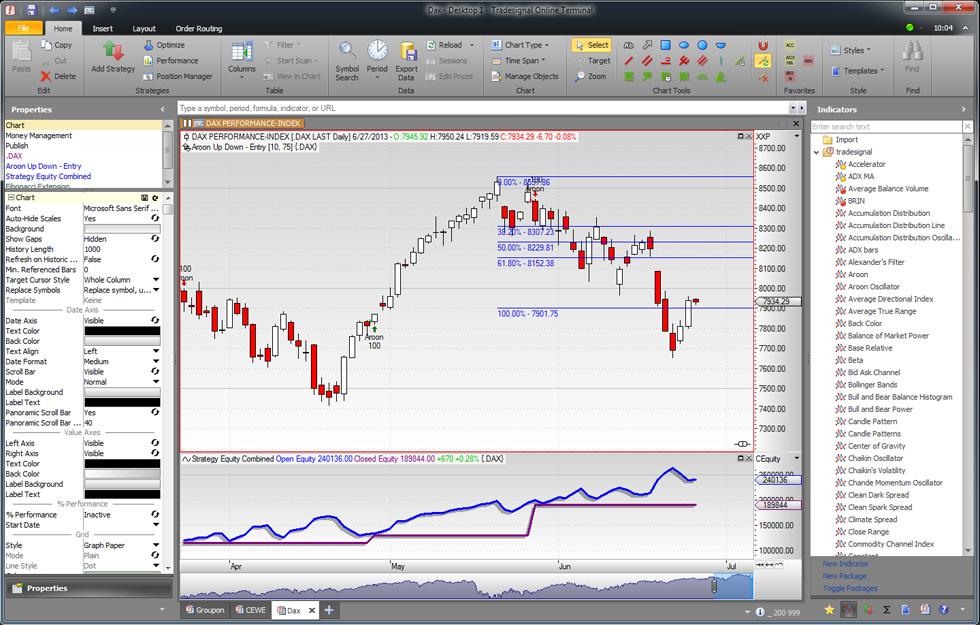 Bremen, 07/04/2013. Why does the animal world always make their way into technical analysis? We do not know, maybe otherwise it would be too abstract. Anyway, Tradesignal Online Terminal gets many new individual settings with the new update to version 7, with and without animal reference. In the latest version especially the enhanced User Interface shines with exemplary clarity and intuitive operation. In addition, the new Equilla Debugger simplifies the development of trading strategies significantly.Leonardo da Pisa, better known as Leonardo Fibonacci, developed in 1202, the number sequence named after him to describe the growth of a rabbit population. At Tradesignal Online Terminal, however, the use of Fibonacci lines in 2013 is still there to analyze price movements. Retracements can be determined even more flexible with the new Fibonacci Extension Tool, because it allows any extension and free displacement of the lines according to Fibonacci's laws.For convenient handling of the drawing tools Tradesignal Online Terminal provides a new Mini Toolbar. With this feature, all drawing tools can be opened directly in the chart, which is especially helpful and time saving when very many tools are used in a chart or if the view of the main menu has been minimized.When the computer pioneer Grace Hopper 1947, stuck a moth in a book that had previously blocked a relay of a computer, she wrote: "First actual case of bug being found" Today bugs or just errors in programming are constantly found and corrected. This fact is also reflected in the new Equilla Debugger. The debugger can monitor and stop trading systems and indicators in real time. This allows changes to be made quickly and the development of a strategy is very flexible and easily controllable.Sebastian Schenck, head of sales and marketing at the Tradesignal GmbH says: "This feature is a good example of the cooperation of Tradesignal with its users. We are very proud of the result and the achievement of our development team. We are convinced that the Equilla Debugger will make many traders and strategy designers happy. "The evolution of the user interface particularly catches the eye in the new version. It strongly focuses on the direct access to the most used functions. In addition, the possibilities for user-defined settings, including flexible and individually modifiable navigation bars, are greatly enlarged. Immediately users find their way in the new navigation and get intuitively to their desired destination with fewer clicks.Whether the animal world has a decisive influence on technical analysis still remains open. But it is clear that Tradesignal Online Terminal not only since this update a tool that provides all the options for technical analysis that make trading attractive and successful. Moreover, this brief overview is just a snippet of the many innovations in Tradesignal Online Terminal version 7. More information and a free test can be found on the website of Tradesignal Online Terminal: www.tradesignalonline.com/terminalAbout Tradesignal Online Terminal: The desktop application Tradesignal Online Terminal is supplied with real time push data and offers direct order routing. The German and English trading platform offers comprehensive tools and a wide range of data for the interactive chart analysis. With the easy language Equilla trading systems can be programmed individually. In addition, international real time exchanges may be added at any time. Tradesignal Online Terminal is manufactured in Germany by the Tradesignal GmbH, a leading provider of software for the international financial and energy market.Jörg Hiermayr (Project Manager PR & Marketing) _________________________________ Tradesignal GmbH | Linzer Straße 11 | D-28359 Bremen T: +49 (0)421 20109-0 | F: +49 (0)421 20109-12 | E: press@tradesignal.com

11-05-2013 | IT, New Media & Software
Tradesignal GmbH
Tradesignal releases Version 7 – great advances in user-friendliness and strat …
Bremen, 11/4/2013. Tradesignal, software for developing and optimizing trading systems, is now available in Version 7. The most notable feature is the new user interface, enabling easier and faster access to Tradesignal's many functions. Areas have been completely redesigned in order to improve these functions. So for example the new Performance-Report or Positions-Manager have export options to Excel as well as new optics, filter options and highlighting. An entirely new
09-28-2012 | Business, Economy, Finances, B …
Tradesignal GmbH
Practical Trader Training for Traders with Professional Software
New Partnership between Tradesignal and TwoTwoFive London/Bremen 09/21/2012. If you mix a recognised software producer of technical chart analysis and rule based trading such as Tradesignal together with a proficient Gas and Oil Trader such as the British firm TwoTwoFive, the whole is definitely greater than the sum of its parts. The partnership has arisen from TwoTwoFive recognising the need in the international market for training for entry level
06-11-2012 | Advertising, Media Consulting, …
Tradesignal GmbH
Wanted 2.0! – Bremen firm seeks new staff
A Bremen software provider is promising 10,000 euros or an iPad for recruitment of a software developer. If you go down to Bremen's central station this week you will notice a placard with the headline „ iPad or 10,000 Euros“. You'll be wrong to think it's for a contest. It's actually for a job recruitment. Whoever introduces a candidate to the firm, who is then employed, can
02-29-2012 | Business, Economy, Finances, B …
Tradesignal GmbH
Automatic Order Routing with Tradesignal Version 6.3
New open interface offers more options Bremen, 02/27/2012. A new open interface in the programming language Equilla now permits many different forms of data transfer in Tradesignal. With this new open API you can now exchange data with external programs such as MS Excel. It sends and reads data, and the program enables more functions than previously. For example you can now automatically send complex orders from trading strategies

04-24-2019 | Industry, Real Estate & Constr …
Market Density
Global Terminal Blocks Market Professional Survey Report
This report studies Terminal Blocks in Global market, especially in North America, China, Europe, Southeast Asia, Japan and India, with production, revenue, consumption, import and export in these regions, from 2013 to 2018, and forecast to 2025. This report focuses on top manufacturers in global market, with production, price, revenue and market share for each manufacturer, covering ABB TE Connectivity Eaton Connectwell Phoenix Contract Rockwell Automation Schneider Electric Dinkle Molex
02-25-2019 | IT, New Media & Software
ReportsnReports
Bedside Terminal Service Market
#Download Sample Pages of Report @ https://www.reportsnreports.com/contacts/requestsample.aspx?name=1907052 The global Bedside Terminal Service market 2019 research is a professional and in-depth study on the current state of the industry and provides a basic overview of the industry including definitions, classifications, applications and industry chain structure. Global Bedside Terminal Service Market Report including definitions, classifications, applications and industry chain structure. Global Bedside Terminal Service market status, size, outlook of global and major
03-05-2018 | Advertising, Media Consulting, …
Transparency Market Research
Terminal Management System Market
Terminal management system runs, manages and supports wide-ranging terminal networks from central and remote locations for sectors including oil and gas and chemical as well as banking and manufacturing sector. They help in managing and monitoring numerous terminals from a single location in a well-planned manner. Thus, terminal management systems help in aligning business objectives with its technology solutions. They offer a flexible and scalable solution thus ensuring security and
07-31-2017 | Logistics & Transport
RuggON Corporation
RuggON Announces Mobile Data Terminal
RuggON is pleased to announce the MT7000: a durable, all-in-one vehicle terminal for fleet management, asset management, and Electronic Logging (ELD) applications. The MT7000 offers a high-end seven-inch display, intuitive user interface with a multi-touch PCT touchscreen for the ultimate visibility. The smart power management inside MT7000 features delay turn on and off which allows users to have enough time to move this device to second power source or safely shutdown
05-11-2016 | Business, Economy, Finances, B …
DarkMindFX
Get Economic Data Indicators in MetaTrader Terminal
Fundamental Economic Data in Trading Terminal In the world of Capital Markets there is no such thing as "too much information". When trader opens an account with his Forex broker he gets the trading terminal filled with traditional technical indicators which can be applied to the charts. But wouldn’t it be great to have an access to fundamental data like GDP, Employment or Inflation as well? DarkMindFX fills this gap and now
09-24-2013 | Fashion, Lifestyle, Trends
ASIANinNY.com
Celebrate Taiwan @ Grand Central Terminal
Sep 18th 2013, New York - Taiwan Tourism Bureau Office in New York partners with the Smithsonian Museum to promote Taiwan culture with a “Celebrate Taiwan @ Grand Central Terminal” event on September 28, 2013 from 11AM to 2PM for “Museum Day Live!”. The Grand Central Terminal is one of Manhattan’s most famous attractions, and is a part of the U.S Beaux Arts Wonder architectures. Recently, Taiwan Hsinchu Railway Station
Comments about openPR
Your portal is fast, simple, and easy to use. Others may have more functions but they also demand more editing time, you have to preformat the text in order to achieve a good result etc. I think openPR is really fantastic!
Andreas Knepper, wallmedien AG