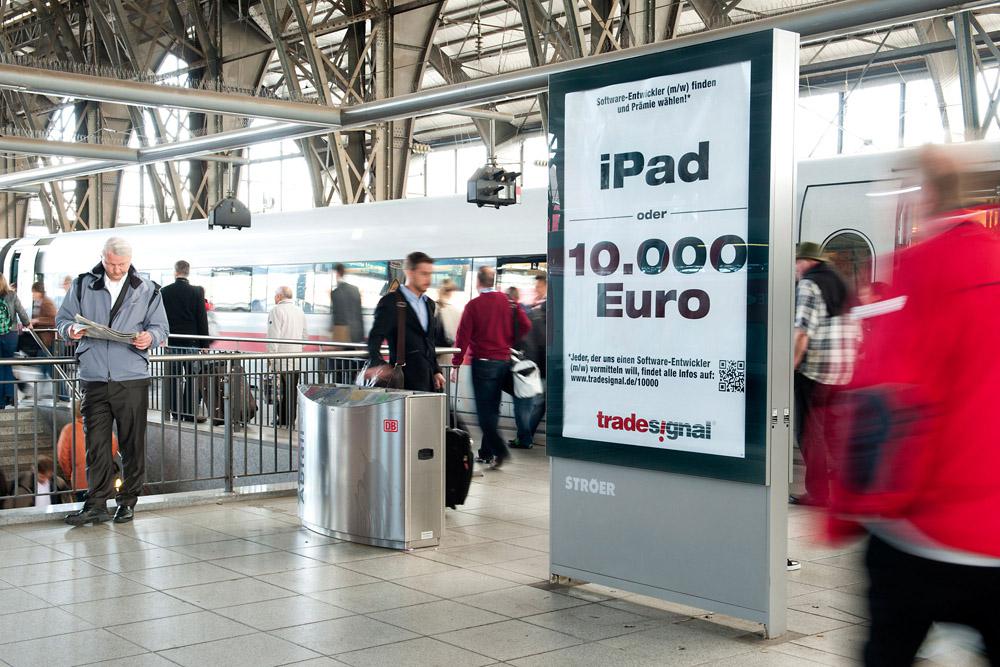 A Bremen software provider is promising 10,000 euros or an iPad for recruitment of a software developer. If you go down to Bremen's central station this week you will notice a placard with the headline „ iPad or 10,000 Euros“. You'll be wrong to think it's for a contest. It's actually for a job recruitment. Whoever introduces a candidate to the firm, who is then employed, can choose the iPad or the 10,000 Euros. It might seem like a joke but this Bremen software firm is totally serious. Tradesignal GmbH is an international business which produces analytical trading data software. In order to stay one step ahead of the international game, it wants to push development quickly forward. Conventional methods have so far failed to recruit diligent programmers. This is why Tradesignal has gone ahead with their „iPad or 10,000 Euros“ campaign, using social media networks such as Facebook and Google Plus to spread the word on finding new staff. Sebastian Schenck, Head of Sales and Marketing at Tradesignal explains: „We have been looking for new staff for various positions for a long time now. We have even lowered our requirements in the last three years, but have yet to find the right people.“ The firm, which is situated close to Bremen University, certainly makes a good impression. There is no overtime, free drinks, regular massages and a games room with billiards and table football. For many this would be a dream employer, but Schenck notes that: „This is the norm for international IT companies“. Although one must ask why this company has so much trouble finding staff. The Verein Deutscher Ingenieure (German Engineers Association) states a shortage of qualified staff as the main reason. Recently at the CeBit 2012 convention the VDI warned that there is no improvement in sight concerning this staff shortage. Quite the opposite: in December 2010 there were 21000 unfilled positions, the same month in 2011 there were more than 30000. This is mostly because there are not enough graduates in Germany and firms are looking for qualifications other than those taught at university or even specialist IT education. This Bremen firm uses programming languages which provide clear advantages when processing large volumes of data. These languages are also used by other software firms such as game developers, air traffic control and the car industry. The problem is these languages are no longer taught today. On the question of whether this firm has previously worked with headhunters, managing director of the Tradesignal GmbH, Jürgen Mittelstaedt states: „No, not yet and for moral reasons we don't want our people to be enticed on financial grounds which outweigh ethical considerations. We would rather give part of the money that we would pay a headhunter to ordinary citizens who can help us.“ With a smile, Schenck adds: „A social recruitment campaign is a perfectly natural solution. The idea that someone knows someone who might like to work for us is simply made more attractive with an added incentive“. Finally it should also be noted that employees of Tradesignal, in contrast to normal proceedings, are not excluded from this process. Participants can find out more information at www.tradesignal.com/10000 until 22nd of June 2012. Until then, Good Hunting!Tradesignal GmbH Tradesignal GmbH has been among the leading producers of software for international finance- and energy markets for many years. The core strength of the business lies in the development of software products enabling rule based trading strategies and technical chart analysis. Tradesignal clients are active worldwide in trading establishments such as banks, energy concerns and trading houses. The business sells its product mainly in Europe and Asia. For more information on Tradesignal GmbH go to: www.tradesignal.comTradesignal GmbH Linzer Straße 11 D-28359 Bremen presse@tradesignal.com

11-05-2013 | IT, New Media & Software
Tradesignal GmbH
Tradesignal releases Version 7 – great advances in user-friendliness and strat …
Bremen, 11/4/2013. Tradesignal, software for developing and optimizing trading systems, is now available in Version 7. The most notable feature is the new user interface, enabling easier and faster access to Tradesignal's many functions. Areas have been completely redesigned in order to improve these functions. So for example the new Performance-Report or Positions-Manager have export options to Excel as well as new optics, filter options and highlighting. An entirely new
10-01-2013 | Business, Economy, Finances, B …
Tradesignal GmbH
Of bugs and rabbits - Release of Tradesignal Online Terminal Version 7
Bremen, 07/04/2013. Why does the animal world always make their way into technical analysis? We do not know, maybe otherwise it would be too abstract. Anyway, Tradesignal Online Terminal gets many new individual settings with the new update to version 7, with and without animal reference. In the latest version especially the enhanced User Interface shines with exemplary clarity and intuitive operation. In addition, the new Equilla Debugger simplifies the
09-28-2012 | Business, Economy, Finances, B …
Tradesignal GmbH
Practical Trader Training for Traders with Professional Software
New Partnership between Tradesignal and TwoTwoFive London/Bremen 09/21/2012. If you mix a recognised software producer of technical chart analysis and rule based trading such as Tradesignal together with a proficient Gas and Oil Trader such as the British firm TwoTwoFive, the whole is definitely greater than the sum of its parts. The partnership has arisen from TwoTwoFive recognising the need in the international market for training for entry level
02-29-2012 | Business, Economy, Finances, B …
Tradesignal GmbH
Automatic Order Routing with Tradesignal Version 6.3
New open interface offers more options Bremen, 02/27/2012. A new open interface in the programming language Equilla now permits many different forms of data transfer in Tradesignal. With this new open API you can now exchange data with external programs such as MS Excel. It sends and reads data, and the program enables more functions than previously. For example you can now automatically send complex orders from trading strategies