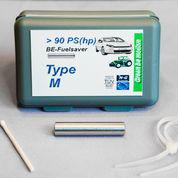 Cham, 06.05.2013, The BE-Fuelsaver® has been nominated for the German environmental prize in 2013. This shows that the success story and dynamic development of the BE-Fuelsaver® continue. "We feel honoured and proud that the BE-Fuelsaver® and New Generation have obtained the nomination for the German environmental prize" says Gregor von Drabich-Waechter, founder and head of Ambition AG. The German environmental prize with prize money totalling 500,000 euros is one of the most prestigious environmental prizes for achievements and efforts for the protection of the environment in Europe. The selection committee consists of high-ranking public characters of science, economy, media and society. BE-Fuelsaver® represents innovation and trendsetting technology in the usage of space energy to produce energy. The bioenergetic BE-Fuelsaver®, a metal pen only a few centimeters long, made of stainless steel and tested by TUV is an information carrier which changes the molecular structure of the fuel through a quantum effect. Thus the combustion process is optimized for all vehicles running on fossil fuel, be it petrol, diesel or natural gas. It does not only reduce the fuel consumption by 6 to 20% but the toxic exhaust is reduced also by 90%. The usage of BE-Fuelsaver® is an innovative solution with a positive effect on a number of environmental issues, accompanied by favorable side effects concerning costs. More and more transportation companies, trade associations, companies with fleets and individuals benefit from the usage of the BE-Fuelsaver®. The nomination for the German environmental prize values the long-term efforts to develop alternative energy concepts. Business Enquiries Ambition AG Gregor von Drabich-Waechter Alte Steinhauserstr. 1 CH-6330 Cham Telefon: +41 (0)41 729 3674 und Telefon: +49 (0)7221 3022 9999 E-Mail: mail@be-fuelsaver.net Internet: www.be-fuelsaver.net Ambition Inc. is a Swiss-based company that concentrates on the distribution and marketing of the various BE-Fuelsaver® products. Sales are made on an exclusive basis in Switzerland and sold in co-operation with partners in other European countries, east Africa and the USA. This advanced technology is patent protected and sets new standards for reductions in fuel consumption and waste gas production. The product was developed in Austria. Aside from the BE-Fuelsaver®, Gregor von Drabich-Waechter is the founder and administrator of the company. Press Enquiries Roswitha Frank Communication Rudolf-Ulrich-Str. 2 76532 Baden-Baden Telefon: +49 (0) 178 8827368 E-Mail: roswitha.frank@web.de

01-23-2014 | Health & Medicine
Ambition AG
Water as Information Carrier: bio-energetic Water Stone improves the Quality of …
Cham, 21.01.2014, Water which has been informed by the bio-energetic water stone is vitalized by the bio-energetic effect and tastes fresh and soft as if originating from a mountain well. The water is "revitalized" and is thus very different from regular tap water. When drinking coffee or tea for which energized water has been used, a completely new and positive taste experience is generated. Even plants clearly flourish
08-26-2013 | Energy & Environment
Ambition AG
Become a Distribution Partner - do more for the Protection of the Enviroment wit …
Cham, 24.06.2013, As a distribution partner you have the option to really do more for the protection of our environment! Those ready to convince other people to save energy, reduce toxic emissions and also cut costs can do so by offering an innovative product, namely the BE-Fuelsaver®. A metal pen, only a few inches long with great potential. To save
04-10-2013 | Energy & Environment
Ambition AG
BE-Fuelsaver.net: Bridging Technology reduces Fuel Consumption!
Cham, 23/12/2013, The BE-Fuelsaver® reduces fuel consumption by 6% to 20% and thus helps cut cost. Be it a transportation company, a bus company or a food & beverage deliverer: not only small or medium-sized companies with a fleet are looking for ways to save fuel and money based on the fact that fuel costs are rising. Numerous customers have seen the
03-01-2013 | Logistics & Transport
Ambition AG
BE-Fuelsaver.net: ELVIS Inc. - Germany's largest truck network - is Ambition Inc …
Cham, 22.02.2013 The Swiss-based company Amibition Inc. has made a successful deal with ELVIS Inc., Germany's largest truck and lorry transport network made of 13 shareholders. The two new companies are now co-operative partners and have just begun a long time collaborative project. ELVIS, standing for Europäischer Ladungs-Verbund Internationaler Spediteure (European Cargo Network of International Forwarding Agents), stands for innovation, security and reliability on the streets of Europe. In front