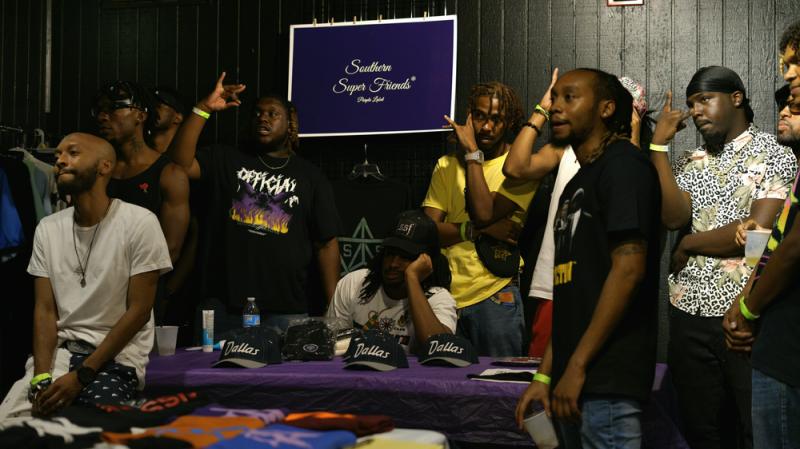 Southern Super Friends, a developing multi-national business based in one of the most populous cities in the world when it comes to the music scene, are not only trendsetting and diversified, but also unique when it comes to the musical style they depict. Because the group has so many personalities that emerge across their discography, some would compare the sounds of Southern Super Friends to the Wu-Tang Clan. Whether it's in fashion, marketing, or ideologies, the Southern Super Friends group is continually implementing ideas and making moves before they become popular. The Southern Super Friends Purple Label is a fashion company where you can get unique SSF merchandise as well as one-of-a-kind pieces made by Zypherman G himself."On the same album, you may be singing along to a ballad one minute, vibing as we float on melodic rhythms the next, and feeling turned up ready to get lit for the weekend the next." DH OFFICIAL, a member of the Southern Super Friends, had this to say. DH OFFIClAL says he speaks for all of the cast members when he says they aim to spread happiness and inspire individuals to be their best selves. That's why people keep working even when circumstances are tough or unpleasant. The group's primary purpose is to manifest massive quantities of money. Recently, there have been discussions about a new initiative. They're getting ready to release their eighth album, Freeze Warning 2. This sequel, inspired by the winter elements that are becoming more common in Dallas, TX, shows that the Southern Super Friends are certainly chilly at their trade. This album shows our progression from the previous one, from the mixing to the bars to the moods. It is my personal favorite album that has been released thus far.According to DH OFFICIAL a member of the Southern Super Friends, the collective has a total of 12 members. Members hail from densely populated areas such as Washington, D.C., El Paso, Texas, Texarkana, Arkansas, and even Oklahoma City. With thus many people in a group, there is a significant benefit in terms of population, growth, and diversification. The group's ideas came from individuals from diverse walks of life and with various styles, but they all came together to achieve a one goal: to spread optimism and inspiration via music and other creative endeavors. Through the music, you'll be able to sense it. The nicest aspect about having so many Southern Super Friends members is that the music sounds so different from what you may hear in the business today, particularly coming from Texas.The objective for the Southern Super Friends is to provide health, money, and education to future generations via their initiatives, as well as the satisfaction of knowing that their music has touched large audiences.It takes a lot of effort to succeed in the music business. And the Southern Super Friends aim to be the best in whatever they do. They keep 10 toes down, work hard, and shine through the gloom by being cheerful and not falling to vices. That's what the Southern Super Lifestyle is all about."Believe in yourself and put out your best effort in anything you do." Maintain a good attitude and a strong foundation. It isn't about what you can receive, but rather what you can offer. Keep it at ten thousand," adds DH, a member of the Southern Super Friends band.Cloutesphere - Zypherman G Luv v. Lust 2 by Dommi.San 'Kill Yourself Too,' by B Swan DH OFFICIAL - Addicted to my HustleIn 2022, keep an eye out for the following new content for Southern Super Friends: #Focuseddd recorded this conversation.IG: @southernsuperfriends Tiktok: @southernsuperfriends Twitter: @southernsuperf

04-25-2022 | Science & Education
Doulitsa Press Portal
Dr. Daryl D. Green Receives 2022 ACBSP Teaching Excellence Award
OVERLAND PARK, KS, USA (April 25, 2022) Dr. Daryl Green, Associate Professor, Oklahoma Baptist University, Shawnee, Oklahoma, has been named a regional recipient of the 2022 ACBSP Teaching Excellence Award. The Accreditation Council for Business Schools and Programs (ACBSP) recognizes individuals each year who exemplify teaching excellence in the classroom. Dr. Green, will be honored, along with other regional recipients, at the ACBSP Conference 2022, June 17-20 in Washington, D.C. He
03-31-2022 | Business, Economy, Finances, B …
Doulitsa Press Portal
Fathom Yacht Club Launches World's First Tokenized Membership to Real-World Yach …
Miami, Florida - Melding the best of the digital and real worlds, Fathom Yacht Club has launched in Miami as the world's first tokenized membership to a social yacht club. With private membership purchased through an NFT token, Fathom offers exclusive access to charter yachts and other VIP experiences, with a variety of global locations in the works. "No matter where you live, you can enjoy a wealth of bespoke digital
02-21-2022 | Advertising, Media Consulting, …
Doulitsa Press Portal
Valentino Magra: An Outstanding Photographer & Web Developer
It is a pleasure to write about someone from a very different perspective and point of view. Valentino Magra is truly one of the most versatile and successful characters. It is not uncommon for people to want to be photographer or web developer. Digital photography is not only financially rewarding, but also provides many other benefits for individuals; many find the profession exciting and enjoy the variety of experiences, while
02-14-2022 | Arts & Culture
Doulitsa Press Portal
The Lucky Designs Mini Bio and His Latest Collaboration With Instagram Star Pres …
@luckydesigns_ collaborates with fellow designer @prestonhudman and the post goes viral! Lucky Nunthatee or better known as his online name LuckyDesigns, is a Graphic Designer and Video Editor who has been working with YouTubers/Influencers for the last 6 years. He has worked with people you might know in the UK/US like KSI, DTG, DDG, EO, Amelia Monet, Asmxlls, ComedyShortsGamer (Deji), MiamiTheKid, CeyNoLimit, TheLifeOfCashK, ShowTimeBarii, Bomiiao, TBJZL and many . Nunthatee was