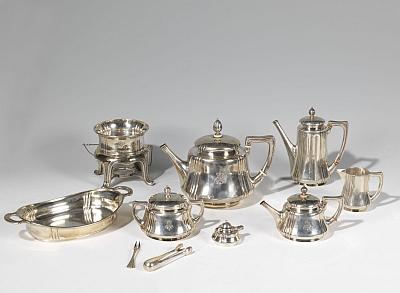 Munich, 13 February 2013, (kk) – He was a passionate art dealer. Countless interesting encounters and events coined a life during which he compiled a very exquisite art collection. Now this unusual collection of the Munich art dealer Harry Beyer, who passed away last fall, will be sold at Ketterer Kunst.His love for art and antiquities was woken at the tender age of eight, when the truck drivers in his parents' shipping company brought him exciting souvenirs from their journeys. He was particularly fond of a set of old copper coins which he cleaned in order to find out who was shown: “There were kings and I got their biographies and began reading about them. This is how it all began“, said Harry Beyer.Not only his knowledge grew over the years, likewise did his collection. Thanks to his numerous talents, his endurance and insistence, he soon became established as a renowned antiquity and art dealer. Hardly anyone else had such great knowledge in so many different fields of expertise. A visit to the art shop Harry Beyer in Munich's Salvatorstraße, in which Germany's longest serving art dealer advised his clientele with knowledge gained in more than 60 years, was a journey through 250 years of both European as well as world history. His private collection, which will be sold with more than 400 objects on 15 May, 2013, covers a wide range: More than 40 paintings, ca. 100 porcelain objects and just as many lot numbers of Russian silverware will be called up. Additionally, numerous Asian artifacts as well as around 40 sculptures from the 18th – 20th century will be offered. The range of offerings is completed by some 40 miscellaneous objects and handicrafts as well as several ancient sculptures. Next to several works from the house Fabergé (among others, a silver frame with a miniature of Christian IX of Denmark, estimate: EUR 12.000-15.000), a silver box (estimate: EUR 1.600-1.800) with a portrait of Richard Wagner and with decoration utensils from his operas, the duel pistols of King Oscar of Sweden (estimate: EUR 4.000-5.000) are definitely worthwhile mentioning. A 19th century Boatswain's call (estimate: EUR 1.200-1.500) may also be of noble provenance. The remarkably neatly carved crests hint at a present from Queen Viktoria and her husband Prince Albert of Saxe-Coburg and Gotha to their grandson, the later German Emperor Wilhelm II. Along with an oval silver brooch by Ernst Ludwig Kirchner, later used as a belt clasp (estimate: EUR 6.000-8.000), two splendid nine-flame chandeliers by Pierre-Philippe Thomire are very captiva-ting. His works are amongst others in possession of the Louvre in Paris, the Hermitage in St. Peters-burg and the Rijksmuseum in Amsterdam. He also made the bronzes for Napoleon‘s “Royal Stable Desk“ and the cradle for the king of Rome. The estimate for both chandeliers is at EUR 15.000-20.000.Before he died on 28 October, 2012, Harry Beyer had decided to donate his unique collection of private treasures to the Bavarian National Museum in Munich at no conditions whatsoever. He decreed only that the house should take the items suitable for display and to sell remaining objects through Ketterer Kunst in order to spend proceeds on new acquisitions.Catalogs: Order your free catalog under +49-(0)89-55244-0 or send an e-mail to a.krenski@kettererkunst.de and you will also receive a free catalog for the auction of Old Masters & Art of the 19th Century on 14 May.Preview: Sun, 05 May, 11 a.m. – 5 p.m. Mon-Wed, 06 - 08 May, 10 a.m. – 6 p.m. Thu, 09 May, 11 a.m. – 5 p.m. Fri, 10 May, 10 a.m. – 6 p.m. Sat/Sun, 11/12 May, 11 a.m. – 5 p.m. Mon, 13 May, 10 a.m. – 3 p.m. Auction: Wed, 15 May, The Collection Harry BeyerSince it was founded in 1954, Ketterer Kunst has been firmly established in the front ranks of auction houses dealing in art and rare books, with its headquarters in Munich and a branch in Hamburg. Gallery rooms in Berlin as well as representatives in Heidelberg, Düsseldorf and Modena (Italy) have contributed substantially to the company's success. In addition, exhibitions, special theme and charity auctions as well as online auctions are regular events at Ketterer Kunst.Contact:for client enquiries: Ketterer Kunst Joseph-Wild-Str. 18 81829 München Tel. +49-(0)55244-444 Fax.: +49-(0)55244-177 E-mail: infomuenchen@kettererkunst.defor press enquiries:Michaela Derra M.A. Telefon: +49-(0)89-55244-152 (Fax: -177) E-Mail: m.derra@kettererkunst.de