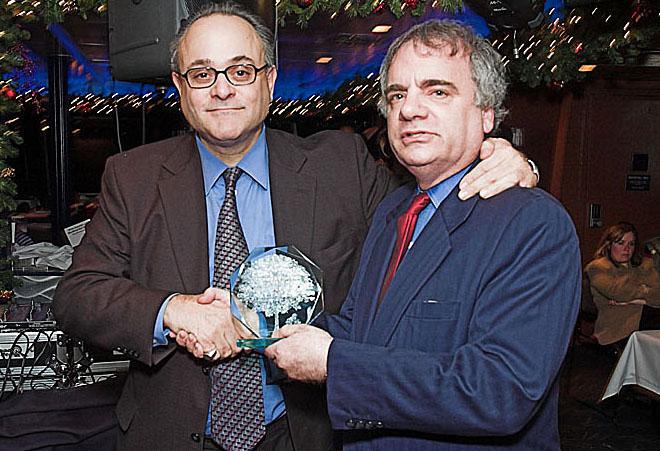 Attorney Jeffery M. Leving with Art Kallow as he accepts an award.

This Tuesday, February 12th, nationally acclaimed fathers’ rights attorney Jeffery M. Leving interviews award-winning family law attorney Art Kallow at 7:30 PM (CST) on channel 21 CAN-TV’s Chicago Counterpoint. Viewers can call in with questions and comments at (312) 738-1060, or stream live at: http://cantv.org/live. Mr. Kallow and Mr. Leving will discuss the special legal challenges of grandparents who are trying to gain custody of their grandchildren.In an era in which young people increasingly are having children whom they are unable and unwilling to care for, grandparents have had to step in to save the future of this fragile group of kids. Find out what you can do to protect your grandchildren and your rights as their guardian and provider. About Attorney Art KallowOn February 7th, Mr. Kallow won his latest victory for the custody rights of grandparents. He has extensive experience winning parentage rights for grandparents in court. A highly respected family law attorney, Mr. Kallow is the 2009 and 2010 recipient of the Domestic Relations Division of the Circuit Court of Cook County recognition award. Thomson Reuters has named him an “Illinois Super Lawyer,” an honor given to only the top five percent of attorneys in the state. He has attended the National Judicial College and has been appointed by judges to serve as a child representative in a number of contested visitation and custody cases. He has also served as a hearing officer for the City of Chicago and has successfully represented hundreds of clients throughout the decades, including cases which involved complex jury trials, contested custody and visitation, child support, paternity, and intricate financial issues.About Attorney Jeffery LevingNamed one of “America’s Best Lawyers” by Forbes Radio™, Jeffery M. Leving (http://dadsrights.com) is co-author of the Illinois Joint Custody Act. He is also the chairman of the Illinois Council on Responsible Fatherhood (www.ResponsibleFatherhood.Illinois.gov) and founder of the Fatherhood Educational Institute, which promotes fatherhood in impoverished communities. In November of 2012, President Barack Obama awarded Leving the National Lifetime Call to Service Award. His groundbreaking book on custody, Fathers’ Rights, hit #1 on Amazon’s Best Selling Author’s list. He is also the author of Divorce Wars and the newly released and critically acclaimed How to Be a Good Divorced Dad. About CAN – TVCAN-TV (Chicago Access Network Television), allows members of the community to voice their opinions on television. CAN-TV has five local, non-commercial channels that reach over one million viewers throughout Chicago. For more information concerning the pursuit of justice for grandparents’ rights, call Jennifer Whiteside at (312) 296-3666.Built upon our passion for the health and welfare of the family and for producing highly effective legal representation for fathers, the Law Offices of Jeffery M. Leving, Ltd., is a nationally-recognized family law and fathers’ rights advocacy firm with three core areas of client service: family law, divorce and child custody.19 South LaSalle Street Suite 450 Chicago, IL 60603

You can edit or delete your press release Attorney Art Kallow, Fighting for Grandparents’ Rights, Appears on Chicago Counterpoint here