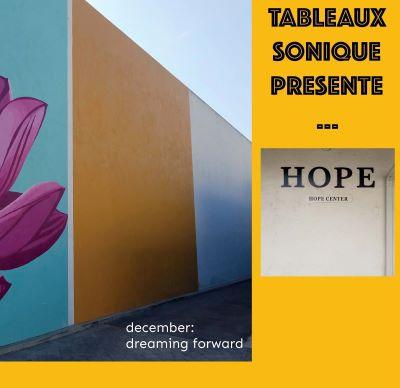 As of December 21 (Winter Solstice), the band known as Tableaux Sonique officially springs forward into life as a recording act. Enter the timely single “December: Dreaming Forward,” a bold and hopeful first step for the so-called “boho soul” group led by Portland-based chanteuse Shelly Rudolph and Santa Barbaran guitarist-conniver Joe Woodard. The gifted guest musician list showcases Chris Symer on bass(es), Tom Buckner on tenor sax and drummer Austin Beede, with Portland’s Paul K. Ward doing the mixing/mastering. The song will be available on bandcamp, soundcloud, and other portals and formats to come. Born in the SoCal and NW back rooms/home studios during the pandemic lockdown, Tableaux Sonique has been a project in the works for a year-and-change. The band made a fortuitous live debut at the Lobero Theater in Santa Barbara last summer, as part of the Zach Gill-hosted shindig evening. Having worked on a healthy pile of original songs, slated for a debut album in 2022, Rudolph and Woodard decided to take an early leap into the fruitful fray. Timing is of the essence. “December: Dreaming Forward” was written by Woodard a year ago, as an ode to optimism, at a time when Joe Biden had landed in the White House and news of covid vaccines lightened the load of global COVID-ized gravitas. The song remains the same, gone newly relevant this December. Hope for hope springs eternal. Enjoy.The Short Bio: Rudolph and Woodard met when the singer lived and worked in Santa Barbara, and the pair worked on her album Water in My Hand, along with Tom Lackner, cohort/drummer/studiokeep at his Tompound studio. Back in her hometown of Portland, Rudolph has established herself as a well-known and loved “world soul” singer of note, and her latest album, The Way We Love—featuring the late, great cellist David Darling--was released last year on Origin Records. Woodard has been active in many projects over the years, including Headless Household, flapping, Flapping, Dudley, Lucinda Lane and his now-and-then solo artist life (recently releasing the “faux folk” album Goleta Electric). Tableaux Sonique’s time has come. In (and on) stages.www.tableauxsonique.comhttps://www.facebook.com/TableauxSoniquewww.tableauxsonique.bandcamp.com https://soundcloud.com/tableauxsoniqueHousehold Ink Records p.o. box 2093 Santa Barbara, CA 93120Tableaux Sonique is a new "boho soul" band, formed by Portland, OR-based singer/songwriter Shelly Rudolph and guitarist-songwriter Joe Woodard, from Santa Barbara, CA.

01-19-2021 | Business, Economy, Finances, B …
David Joseph Marketing
Ideanomics December and Q4 EV Sales Activity
NEW YORK, Jan. 15, 2021 / Ideanomics (NASDAQ: IDEX) announced its Mobile Energy Global (MEG) division's sales activities for the month of December and Q4 2020. For the period starting December 1, 2020, through December 31, 2020, MEG delivered a total of 439 units, of which 356 were for the taxi/ride-hailing business segment, and the remaining 83 were for the rental car business segment. All units, invoiced during the period from
08-04-2011 | IT, New Media & Software
Aaris Internet Solutions Pvt Ltd
Twitter Valuations Climb Post December
Mumbai, INDIA: In the news for its growing fan following and increasing popularity, Twitter is also putting money where its mouth is. There is an increased interest in Twitter, and there are deals being struck which redefine the company as we speak. Twitter is on the brink of closing out an $800 million dollar deal, which is set to pave the way for future growth. The move is also an attempt
01-20-2011 | Arts & Culture
Artfact Live!
Artfact Live! December Auction Results Roundup
(Boston, MA) – Artfact Live! closed out 2010 on a high note thanks outstanding auctions from several of Artfact's Auction House Members. December's highlights include: Apple Tree Auction Center's Model Train and Railwayana auction on December 9th with more than 4,000 online bids totaling almost $200,000 in value; Alex Cooper Auctioneers' December 11th Guns, Books, Stamps and Pens auction with over 1,100 online bids; and Ewbank Clarke Gammon Wellers' three-day
11-30-2010 | Tourism, Cars, Traffic
MicronNexus GmbH
Car Hire this December in Alilcante
Hamburg, 29.11.2010 – www.carhiremarket.com is offering their customers low prices and a free additional driver to explore the many sights of Alicante and the Costa Blanca this December. Before the stress of the Christmas period gets into full swing, an early Christmas present in the form of a holiday to Alicante could be in order! With an average temperature of 15ºC and beautiful countryside to explore, the Costa Blanca region
11-26-2007 | Fashion, Lifestyle, Trends
DOPAMIN LIMITED
Fashion label DOPAMIN starts on 1 December
Young designers from England, Finland and Germany start their own independent fashion label – defying the rules of the fashion industry “I have always had a passion for fashion and always wanted to design clothes that will bring you out and have that unique part of what we all have” – says James, 17-year-old fashion designer from Norwich, UK. This credo has made him part of one of the hippest fashion
11-15-2006 | Health & Medicine
ETLog Health EnviroTech & Logistics GmbH
1. December is World Aids Day!
Berlin/Cologne. The annual World Aids Day is designed to prevent the illness AIDS from being forgotten. Children are particularly endangered. In addition to UNICEF, AIDS support services and other state-funded, regional bodies, firms are also involved in the fight against this terminal illness – especially in the prevention work for children and teenagers. Since 1988, the World Aids Day takes place on every 1 December. Established by the United Nations,
Comments about openPR
OpenPR is clearly structured and remains true to its principle of confining itself to the essential parts. OpenPR has proven to be a very good and reliable partner to our media agency: Within the shortest time the releases are online and go down well with the media representatives. The success of OpenPR is reflected in the steadily increasing number of press releases. It is good that OpenPR exists!
Ursula Koslik, Director Marketing & PR, F+W Hamburg