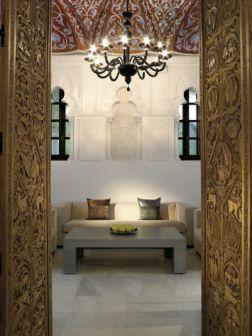 Miami Beach, FL, July 26, 2007 – Epoque & Avantgarde Hotels is proud to announce their partnership with the Hospes Palacio del Bailío. This beautiful boutique hotel has been selected by Condé Nast Traveller as one of the best European hotels opened in 2007. Hospes Palacio del Bailío is an Avantgarde Luxury and it is the first five-star hotel in Cordoba. Located in the heart of the historic centre of the Califal city, this hotel is a clear example of culture, well being, art, history, gastronomy and relaxation. The stables, the carriage houses, the barns, the Roman remains, the original, highly-valuable paintings and the beautiful garden today represent a balance between design, history, harmony, space and light. Hospes Palacio del Bailío, which was built between the 16th and 18th centuries, originally formed one of the major properties of the distribution of Cordoba after the reconquest, and in 1982 it was declared property of cultural heritage interest under the category of Monument. It has 53 spacious rooms, extensive gardens, several patios, one of them overlooking the remains of an ancient Roman house; comfortable and surprising meeting rooms; the Senzone Restaurant & Tapas Bar, with local products and dishes; and the most complete services for relaxation and wellness in the Bodyna Spa. Other Epoque & Avantgarde Hotels which are part of the Hospes group are: Hospes Amérigo, in Alicante; Hospes Palacio de los Patos, in Granada; Hospes Maricel, in Majorca; Hospes las Casas del Rey de Baeza, in Seville; Hospes Palau de la Mar, in Valencia;. In addition, two new hotels are scheduled to open in 2007: Hospes Villa Paulita, in Puigcerdà (Girona, Catalan Pyrenées), and Hospes Madrid. About Epoque & Avantgarde Hotels: Epoque Hotels is a collection of worldwide avant-garde, trendy-chic, and luxury-classic boutique hotels based in over 100 destinations. With its 300 hotels in its portfolio, divided in two lines: Avantgarde Line and Epoque Classic, it is rapidly establishing itself as the leading reference in the segment of boutique hotels. Headquartered in Miami, the Company has also sales offices in Italy, UK and France. Stefano Maranzana, Public Relations Epoque Hotels stefano@epoquehotels.com 39 340 9123 536 http://www.epoquehotels.com http://www.avantgardehotels.com

10-21-2008 | Business, Economy, Finances, B …
CHD Expert Group
Tophotelprojects.com®: More than 270 new top hotel construction projects added …
International database offers data of over 2,800 hotel projects worldwide Hamburg/Germany – Oct 21, 2008 - Tophotelprojects.com®, the international database for top hotel construction projects, have added more than 270 new luxury and first class hotel projects since September. Over 780 hotel project data sheets have been updated within the last six weeks. In total, tophotelprojects.com® offers 2,869 luxury and first class hotel projects around the world – each with all
07-24-2007 | Leisure, Entertainment, Miscel …
Epoque Hotels
Epoque & Avantgarde Hotels Reaches 300 Exclusive Boutique Hotels in the World
In July 2007, the unique collection of avant-garde, trendy-chic, and luxury-classic boutique hotels grows to 300 properties. Epoque & Avantgarde Hotels continues to excel in establishing itself as the most coveted collection of trend-setting and luxury-classic boutique hotels. In mid July 2007 the American hotel Representation Company reaches 300 properties in the top worldwide destinations, adding thirty more to its portfolio from the beginning of the year. Several of the most
03-22-2007 | Leisure, Entertainment, Miscel …
Epoque Hotels
Epoque Hotels Announces Hospes Palacio de los Patos award as 2nd Best European D …
Hospes Palacio de los Patos: an ideal blend of service and superb customer service, design and comfort. All to provide its guests with the opportunity for true rest and a world of revitalising sensations. This is why the German edition of the prestigious GEO magazine, after having compiled a list of the continent’s 70 top hotels, has acknowledged this property as the second best design hotel in Europe. Epoque
Comments about openPR
Your portal is fast, simple, and easy to use. Others may have more functions but they also demand more editing time, you have to preformat the text in order to achieve a good result etc. I think openPR is really fantastic!
Andreas Knepper, wallmedien AG