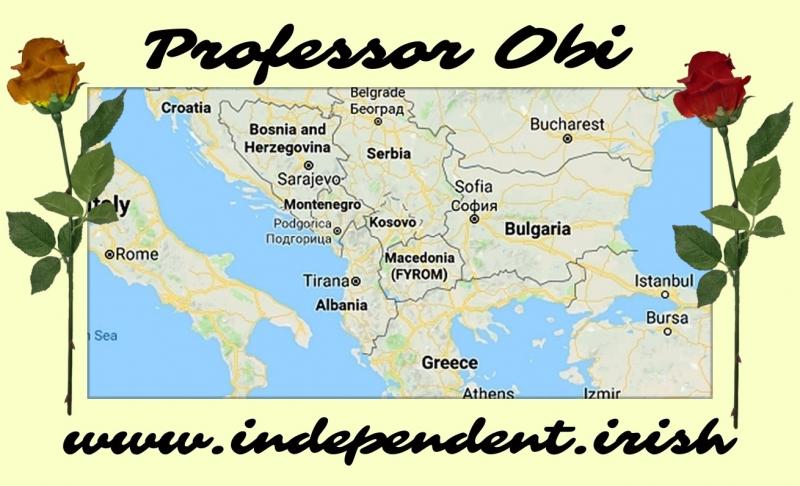 Professor Doctor Joseph Chikelue Obi has proposed a 3 Day Period of (EU) Mourning ; in honour of those who Died in the Accident.

DUBLIN , Republic of Ireland , European Union - - (Independent Irish Press Release) - - Professor Joseph Chikelue Obi (An Alternative Medicine Doctor in Ireland) has publicly issued the following Condolence Statement : My Deepest Condolences are hereby duly tendered to the respective Governments (and Citizenry) of Albania , North Macedonia and Bulgaria ; specifically in relation to almost 50 (Fifty) Innocent People who tragically lost their Lives in a Tourist Bus Accident not too far away from Sofia (the Capital City of Bulgaria) , sometime in the early hours of Tuesday the 23rd Day of November 2021.Although the cause of the disaster is not immediately clear , Bulgarian Officials have already publicly described how the aforementioned Bus suddenly swerved off the motorway , before tearing away at a 50m (164ft) section of a crash barrier, either before or after a Huge Fire had started.I have been reliably informed that the aforementioned Bus was registered in North Macedonia , and that most of those on board were Tourists , returning from a Trip to Istanbul in Turkey. Many of the Passengers were Ethnic Albanians , who were permanently resident in North Macedonia.Whatever the Case : I hereby propose a (3 Day) Period of Official Mourning throughout the European Union (EU) ; in honour of those who Died in the Accident. The Government North Macedonia has already called for 3 Days of National Mourning , and , as far as I am concerned , fully deserves the Undiluted Solidarity of the Whole of Europe , most especially when this is (probably) one of the Worst (Road Traffic) Accidents to happen on an EU Motorway , over the past decade.Finally : Please do kindly permit me to (warmly) wish a (very) Speedy Recovery to all of the Wounded Survivors ; while also (fervently) praying that each of the (Inconsolable) Families (and Friends) of the Deceased will (ultimately) find (more than) enough Inner Strength (and Spiritual Fortitude) to bravely struggle with their (Irreparable) Personal Loss.PROFESSOR DR JOSEPH CHIKELUE OBIINDEPENDENT IRISH POLITICIANISLAND OF IRELAND.https://www.independent.irish/MEDIA (PRESS) CONTACT INFORMATION : Office of the International Media Team for the UK , USA and Ireland. Malone Road Belfast BT9 Northern Ireland Island of Ireland.Website : https://www.independent.irishRepublic of Ireland (ROI) Email Address (Global News Desk) : news.team@outlook.comUSA (North America) Phone Number (Worldwide Customer Support) : +1 6418631393.ABOUT PROFESSOR OBI :Professor Dr Joseph Chikelue Obi successfully graduated as a Medical Doctor (MBBS) in the Year 1991 , and (furthermore) successfully graduated with a Master of Public Health (MPH) Degree in the Year 2001. Prof Obi is Fully Licensed (to date) as an EU Doctor in the Sunny Mediterranean Part of Europe , where he still continues to do quite a lot of Charitable Medical Work for Impoverished Refugees and Migrants.For The Record : Doctor Obi can easily be reached via LinkedIn Profile at https://www.linkedin.com/in/alternativemedicinedoctor (24 Hours a Day).

11-13-2020 | Energy & Environment
hydrogen market
Why hydrogen Demand is increasing Day by Day
Hydrogen is a colorless, odorless, tasteless, and flammable gaseous substance that exists in molecular forms such as water or organic compounds on the earth. It is used in a wide range of application in industries such as petroleum, chemicals, automotive, power generation, nuclear energy, aerospace, telecommunications, food and beverages, and semiconductor. The reforming of natural gas by applying heat is currently the most economical process for producing hydrogen. Here you can
08-27-2020 | IT, New Media & Software
Coherent Market Insights
Smart Elevators Market: innovation Changing day by day!
It is a fast way of traveling between the floors and is preferred to be used in tall buildings or commercial complexes. Increasing government investment for the development of smart cities is one of the major driving factors leading to demand smart elevators. For instance, according to the Indian government Union Budget 2018-19, the government has selected 99 cities under the smart city mission and will provide a fund of
02-05-2020 | Health & Medicine
MAX PET SUPPLIES PTY LTD.
VetSupply Announces a Surprising Special Day Sale This Valentine's Day!
VetSupply, a leading Australia's online pet store announces a Surprising Special Day Sale for the upcoming Valentine's Day. Providing an assortment of pet supplies and pet accessories, VetSupply is eager to offer the most essential pet products at Huge Discounts during this shopping festival. VetSupply is one stop platform for all pet essentials. Dedicated to offer pet products at cost effective prices, the company aims to make pet parenting convenient
01-28-2020 | IT, New Media & Software
L-Soft
New Software Release Makes It Data Protection Day Every Day
L-Soft's New LISTSERV Maestro Email Marketing Software Is the Only Solution Providing Personal Tracking with Subscriber Consent Stockholm (28 January, 2020) - Email marketing gets results. It also requires compliance with data privacy and protection regulations like the EU GDPR and the California Consumer Privacy Act. To help organisations, today L Soft released the newest version of LISTSERV Maestro, the only email marketing software enabling personal tracking with consent from subscribers.
09-05-2018 | Business, Economy, Finances, B …
Customer Numbers
The big daddy of shopping day: Amazon Prime day
Amazon Prime Day has been its biggest shopping event ever with 100 million products sold. As we all know, Amazon is famous around the globe for the products and the genuine products that are sold on this platform. Looking at the popularity, Amazon announces global shopping event for the prime members. It has exclusive benefits for paid members of Amazon. Amazon is mainly famous for its two services. Netflix type
05-22-2017 | Science & Education
Aidi School
AIDI Hosts Successful “Environment Day” Event for Earth Day
Another outstanding event for AIDI! On April 22nd, more than 400 families came to celebrate Earth Day at AIDI International School. In collaboration with TimeOut Family and many local businesses, activity booths were set up all over campus to promote environmental awareness. With beautiful weather as the backdrop for the event, parents and children could choose from a plethora of activities. From tree planting and bookmark crafting to baseball and go-kart
Comments about openPR
OpenPR is clearly structured and remains true to its principle of confining itself to the essential parts. OpenPR has proven to be a very good and reliable partner to our media agency: Within the shortest time the releases are online and go down well with the media representatives. The success of OpenPR is reflected in the steadily increasing number of press releases. It is good that OpenPR exists!
Ursula Koslik, Director Marketing & PR, F+W Hamburg