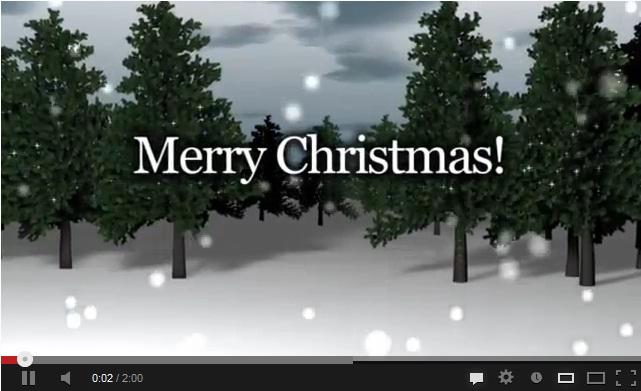 Austria based musician ViennaCC recorded the traditional Christmas song "Softly Falls Each Snow Flake" (Leise rieselt der Schnee) and produced a short music video showing impressions of the Christmas market in Vienna in wintry installations. The original song "Leise rieselt der Schnee" was written by Eduard Ebel, published 1895, as a child song.ViennaCC: "We do not have much snow in Vienna, but outside the city in the mountains there is snow in winter time. Snow is connected with winter and Christmas time and maybe this year we will see a white Christmas in Vienna. The song is very popular in Austria and often sung on Christmas eve. That is why I wanted to record my personnel version of this song."The video shot was taken at the biggest and most famous Christmas market in Vienna near Cityhall (Rathaus). ViennaCC wants to give impressions of Christmas in Vienna to the world. The video shows a few wintry scenes with fir trees, Christmas gifts and snowman. Every scene has a picture frame with videos showing the Viennese Christmas market.In Austria usually Christkind is coming with presents. There is a post office in Steyr, called "Postamt Christkindl" and also on the Christmas market near Cityhall there is a small "Christkindl"-post office. Santa Claus is not as famous in Vienna. Nevertheless when you go through the streets you see red dressed Santa-men. In Austria we call Santa Claus "Weihnachtsmann" (Christmas-man). Read "Merry Christmas" in more than 20 languages.ViennaCC: "And that simply is my message: MERRY CHRISTMAS to the world!"Every year ViennaCC publishes a rockversion of a Christmas song. Last year it was "Oh How Joyfully" (Oh du fröhliche).Christmas video http://www.youtube.com/watch?v=PdSWTdJdn2Y&list=UU7wLWZCLjq5tJQDjiuR5y8QMusic & video production, photography, internet servicesInternet DienstleistungsGmbH Andergasse 12A/2/11 1170 Vienna Austria Contact: Heinz Riemer http://www.vienna.cc/kunst

11-07-2012 | Leisure, Entertainment, Miscel …
Internet DienstleistungsGmbH
ViennaCC Launched Music Video To Song "Why"
The Austrian music & video producer ViennaCC uploaded a music video titled "Why" on YouTube, a song from the latest album "Going Out For Summer." The song is about love saying "I don't know why you gave me no reply". The music video "Why" is made of photos compiled to a video. ViennaCC: "I wanted to make something different, not a musician standing anywhere and singing the song. That would be too simple.

12-14-2017 | IT, New Media & Software
GamerKeyz
GamerKeyz Christmas
GamerKeyz just opened we buy game key codes in bulk so you pay less for the games you love. For Xmas we are offering buy one game get one free until Xmas day! For every game you buy you will receive a random Steam game key which will be delivered to your inbox on Xmas morning. We have 680 Steam games for sale now, we are about to add Origin
12-28-2010 | Fashion, Lifestyle, Trends
Phuket Ocean Villas Co. Ltd.
Christmas in Phuket
Phuket, Thailand: Thailand is a 95% Buddhist country so Christmas is not a festival that officially appears in the Thai calendar, but with a large ex-pat community and Thais who love an excuse to have fun, Christmas is celebrated in fine spirit every year - especially in Phuket. In fact, they started playing Christmas carols in Phuket’s Tesco on 19th November which took me by surprise. Then I noticed the frozen
12-23-2010 | Health & Medicine
IndianDiabetics
Christmas Celebration with Indiandiabetics
Enjoy Christmas, it is a time for celebration and eating for everyone…a little of what you fancy over Christmas will definitely do you good…an odd high glucose reading shouldn't affect your long term control or health or health. 1. Stick with sugar free or diet drinks, or fresh fruit juice only with meals. Fresh fruit juice has lots of natural sugar which will send blood sugars high if taken. 2. Save your selection boxes
12-22-2010 | Politics, Law & Society
Michael Prell
Merry Christmas
’Tis The Season To Celebrate The Annual Festive Tradition Of Refusing To Call Christmas “Christmas.” 68% of Americans say they prefer to be greeted with “Merry Christmas” and not “Happy Holidays” and yet each year the Anti-Christmas Brigade takes to the streets, and takes to the airwaves, to protest against Americans calling Christmas by its name. Why is that? Sometimes the best way to understand why people do what they do is to
11-12-2010 | IT, New Media & Software
DealAbout.com.au
Special Christmas Gift Ideas
A special Christmas feature has been added to Dealabout.com.au web store under which an innovative gift idea will be revealed each day starting 01/11/2010 until 31/12/2010. The manager of this store said customers who are looking for an effective way to hunt for Christmas gifts can greatly benefit from this segment. “A boring gift is the last thing you would want to give to your loved ones in Christmas,”
11-24-2009 | Energy & Environment
TiSUN Gmbh
Last Christmas
The Tyrolean solar specialist keeps it Christmas promise. TiSUN has donated a solar system to the children at the Mordecai orphanage in Port Elizabeth (South Africa) and had it fully installed, free of charge. A project to improve health conditions for orphans who have lost their parents to AIDS has now been carried out. The system became operational in early September and provides hot water for two showers and a bathtub.
Comments about openPR
We publish our press releases on openPR.de because we like people who are "open" - just like us.
Frank Obels, CEO, INCONET - Informationssysteme, Communication und Netzwerkberatung GmbH