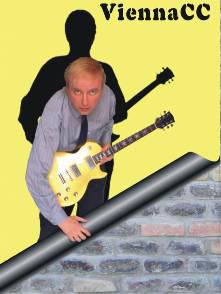 The Austrian music & video producer ViennaCC uploaded a music video titled "Why" on YouTube, a song from the latest album "Going Out For Summer."The song is about love saying "I don't know why you gave me no reply".The music video "Why" is made of photos compiled to a video.ViennaCC: "I wanted to make something different, not a musician standing anywhere and singing the song. That would be too simple. I am just looking at roll film stripes with photos from the last years."The music of the song "Why" is melodious with strong electronic percussions. ViennaCC: "It is a very Beatles-like song, but with modern sounds and sound effects. I want to make songs with melody, that can be played by school bands as well as by orchestras. In modern music productions often effects and rhythm dominate the recording. But a good song must be playable even on an acoustic guitar. The pure song, stripped down to chords and melody, must be strong enough to be sung or written down in a music book."Visitors on YouTube are mainly from Germany, Israel(!) and USA.ViennaCC is producing music videos for his own songs as well as interviews and videos for Austrian bands for OKTO, a local TV-channel in Vienna. ViennaCC actually has 73,000 followers on twitter and 3.7mio page views on myspace.ViennaCC played in bands with various genres, from hardrock to dance music. ViennaCC's goal is short and melodious songs, with a kick of 60s style, but with modern sounds and sound effects. Musical roots are beat, pop and indierock. ViennaCC's goal to record songs that sound like the Beatles would sound today.ViennaCC lives in Vienna, Austria, a bohemian lifestyle enjoying music and video production. ViennaCC: "I loathe stress. A waltz in my mind, but a rock guitar in my hand."ViennaCC was 2x nominated for a New Music Award in Hollywood, and awarded a medal by the International Society of Photographers.Music video ViennaCC - Why: http://www.youtube.com/watch?v=jwt7zeWH6vgLatest album "Going Out For Summer" containing "Why" : http://itunes.apple.com/us/album/going-out-for-summer/id524447833Music&video productionAndergasse 12A/2/11 1170 Vienna Austria

12-14-2012 | Arts & Culture
Internet DienstleistungsGmbH
ViennaCC Launching Christmas Video
Austria based musician ViennaCC recorded the traditional Christmas song "Softly Falls Each Snow Flake" (Leise rieselt der Schnee) and produced a short music video showing impressions of the Christmas market in Vienna in wintry installations. The original song "Leise rieselt der Schnee" was written by Eduard Ebel, published 1895, as a child song. ViennaCC: "We do not have much snow in Vienna, but outside the city in the mountains there is

08-22-2017 | Arts & Culture
BIENNALE AUSTRIA - Verein zur Förderung zeitgenössischer KünstlerInnen
Blue bleu blau blu 2017 Vienna
BIENNALE AUSTRIA association presents on occasion of the exhibition "blue bleu blau blu 2017 Vienna“ positions of artists from Australia, Denmark, Egypt, Germany, Finland, Israel, Italy, Kenya, Netherlands, Russia, Switzerland, Serbia and Austria on the subject of BLUE from 16 – 22 October 2017 at AUSSTELLUNGSRAUM, Gumpendorfer Strasse 23, 1060 Vienna, Austria. “Leonardo da Vinci describes the nature and effect of the color BLUE as immaterial, BLUE is not a color
02-17-2011 | IT, New Media & Software
InterNetX GmbH
InterNetX at Domain pulse 2011 in Vienna
(REGENSBURG – VIENNA, February 17, 2011) – This year, the German-speaking branch meeting Domain pulse is taking place on February 17 and 18, 2011 in the Austrian city of Vienna, with the participation of InterNetX. It is the third time that the Austrian registry nic.at is hosting the event in the capital city. The historical Palais Ferstel is the backdrop for this eighth Domain pulse event and provides the perfect
09-05-2008 | Tourism, Cars, Traffic
Vienna City Tours
Vienna Tour Company, Vienna City Tours Announces New Website
Vienna City Tours, a company that offers guided tours in Vienna, Austria, announces their new website. The company offers many different types of Vienna tours that can be personalized to fit any tourist. VIENNA, AUSTRIA – Vienna City Tours, a company that specializes in guided tours in Vienna, recently announced their new website design. The website allows customers to easily find what types of tours are available and is full of information
07-14-2008 | Fashion, Lifestyle, Trends
juicy pool
VIENNA DESIGN WEEK - Vienna – A City Full of Design
The aim of VIENNA DESIGN WEEK is to show and enable people to experience the many-faceted creative work in the fields of product, furniture and industrial design, but also positions of experimental design. After a successful first festival last year, the work of numerous designers from Austria and abroad will also be presented this October with a growing programme of events. International Design in Vienna In cooperation
01-06-2006 | Tourism, Cars, Traffic
Joe Mancuso
2006 Mozart Year in Vienna/Austria
From January 27 to 29 there will be a great party in Vienna celebrating Mozart`s 250th birthday. It will be an open party for everyone. Mozart`s birthday will be celebrated all over the city with music, films, and several other, sometimes surprising themes. There are five different tours: Mozart Friends and Enemies Mozart Viennese and Cosmopolitan Mozart Art and Love Mozart Life and Death Mozart Yesterday and Today Each of these special Mozart Tours contains four
09-02-2005 | Business, Economy, Finances, B …
continua unternehmensentwicklung
European Venture Market Vienna
European Venture Market Vienna November 8th – 9th 2005 Nationalbibliothek – Wien www.europeanventuremarket.com The European Venture Market is a platform to facilitate the meeting of entrepreneurs and investors. It is a platform for any kind of financing with focus to equity. Giving the wide variety of investors joining the platform the Market is also suitable for any sectors. The European Venture Market is informal, discrete, personal and professional. Meet professionals with a high
Comments about openPR
OpenPR ist the nicest and most clearly laid out PR platform I have seen to this day. The press releases are displayed very nicely and clearly and without any unnecessary frills. The updates are fast and the finished release looks appealing and is clearly legible. Even with 16 years of experience one discovers new things from time to time. Congratulations!
Gabriele Ketterl, Director Marketing & PR, Menads