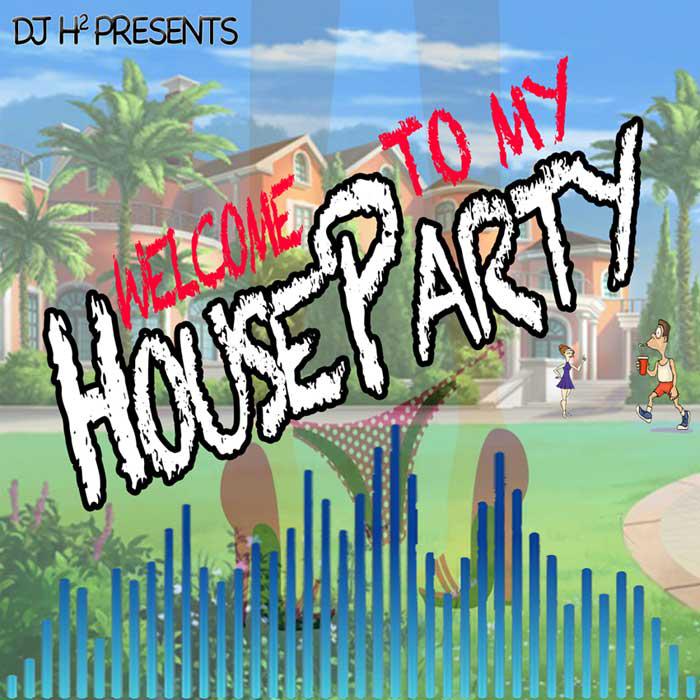 (MIAMI, FL.) DECEMBER 10, 2012 - As the year comes to a close, while most people are plotting on their New Year’s Resolution, DJ H2 is planning his house party. This is not your average “Cat’s away, so the mice will play!” house party. DJ H2 is on an international search for up and coming House Artists to be featured on his new release: the Essential Tape. Over the past 20 years Independent (some turned mainstream) artists like Frankie Knuckles, Jesse Saunders, Technotronic, and Robin S have created a demand for infectious snares, hypnotizing synthesizers and musical compositions.

After releasing the House Mixtape Full Circle on August 2012, DJ H2 is becoming a highly recognizable House and Top 40 music mixologist. Full Circle features guest appearances from artists like James Valentine of Maroon 5. Welcome to My House Party “the Essential Tape” is DJ H2 ’s official release for up and coming House Artists. In his own words, “There are unknown and unheard artists that are #Dope and need to be introduced to the international platform!”

Stay tuned for the official line up of artists. Welcome to My House Party will be released on January 2013. Not to alienate anyone, artists who feature a House Mix will also be consider for this project.

For many years, he has been professionally known as DJ Heroin. It was a name that was befitting of his style (at the time). Throughout his career of DJing for the past 18 years, DJ Heroin has undergone a major transformation. After the signing to Flo-Rida’s (Atlantic Records) Strong Arm Management, DJ Heroin became DJ H2 ; a more appealing stage moniker was needed. DJ H2 is more than a Dee Jay. It is a musical brand befitting of an international musical escapade.

05-24-2012 | Associations & Organizations
Young World Management
11th Annual Miami Peace Festival: Justice for All
August 11th, 2012 commemorates the eleventh annual (Urban Garden Foundation’s) Miami Peace Festival. This outdoor festival attracts over 30,000 people from all walks of life. The Miami Peace Festival creates a platform for music, various cultural foods, and crafts. Over the past 10 years, local and national independent artists, Local County Commissioners, activists, Pastors, families of the victims of violence, as well as A-List Celebrities and Athletes have taken the
02-03-2011 | Leisure, Entertainment, Miscel …
Young World Management
Snap City Announces “And Then There Were 2”
FOR IMMEDIATE RELEASE February 02, 2011 – (Miami, FL.) Originally, a quadruplet, Snap City has been on the scene since the early part of 2006. Beginning with their first release Realer Than Rap, the members of Snap entered the independent music community. By their second release All Eyes on We, the rap quadruplet had become a trio; but not without notable accomplishments. All Eyes on We was critically acclaimed generating interest
11-15-2010 | Leisure, Entertainment, Miscel …
Young World Management
Jingle Jam arrives in the Midwest in a One Horse Open Sleigh
For Immediate Release November 9, 2010 - (Albuquerque, New Mexico) As the holidays draw near, it is a privilege to have a household brand that families embrace during these times. It's the 1st Annual Kiss 97.3 Jingle Jam Starring: Nelly, Pretty Ricky, New Boyz, and Lil Rob on Thursday, December 2nd, 2010 at the Santa Ana Star Center. Doors will open at 7pm. Nelly, Pretty Ricky, and the New Boyz are
10-29-2010 | Leisure, Entertainment, Miscel …
Young World Management
Rum Squad Entertainment: More than an Average Independent Label
FOR IMMEDIATE RELEASE October 27th, 2010 - (Miami, FL.) Rum Squad Entertainment: More than an Average Independent Label Rum Squad Music Group continues their Journey to force their way through the independent market that Miami has already conquered. Their rise to stardom started with a dream and a vision that continued straight into 2010. Each artist signed under the company has pledged their loyalty to the idea that Rum Squad will make an

05-25-2016 | Advertising, Media Consulting, …
RTB House
RTB House Enters Taiwan
24 May 2016 – After several months of operation in APAC, RTB House – a tech company specializing in sophisticated retargeting scenarios and operating worldwide – has opened offices in Taiwan. This is the 4th market in RTB House Asia portfolio, after Indonesia, Malaysia and Thailand and an outcome of an expansion that started in the last quarter of 2015. All operations in Taiwan are going to be carried out
09-10-2013 | Fashion, Lifestyle, Trends
The Promo Girl
House Proud Signs Introduces Handcrafted Wood House Number Plaques
Two newly released door decor plaques are now available at House Proud, using eco-friendly recycled wood, customers can purchase Introducing House Proud’s exclusive new products: the Crispin and Fuji. These new offerings are one of a kind, handcrafted, custom number signs. Crafted from salvaged apple wood from the trees of a dying Brampton, Ontario orchard, these signs are not only beautiful but also look like they’ve been plucked from the boards
11-23-2010 | Business, Economy, Finances, B …
Propacea Limited
London House Prices Fall
Property agents in London have reported a record gap between asking prices and actual sales prices. According to analysis by agents Douglas & Gordon, which compared the asking prices on the Rightmove website with those logged on the Land Registry, there is now an average £79,000 gap between the two figures. This compares with a gap of £6,574 in 2003. Buyers now routinely offer £50,000 or more beneath
11-18-2010 | Business, Economy, Finances, B …
Propacea Limited
House Prices Bubbles Update
The Economist has just published its annual Global House Prices survey, noting that average prices in Australia have jumped by 18 per cent in the year to September 2010, as a result of China’s thirst for minerals and an appreciating currency. It also argues that prices in Spain have been kept artificially high by government action and property is overvalued by 46 per cent (Australia’s market is overvalued by
09-22-2010 | Industry, Real Estate & Constr …
Allform Welding Inc.
Allform Welding Open House
SEQUIM - Allform Welding Inc. is hosting an Open House on Saturday, October 2nd, 2010 from 10:00 a.m. to 4:00 p.m. at 81 Hooker Rd. #9, Sequim, WA. Allform Welding is welcoming the public to tour their showroom and see the launch of the new line of Garden Art. Visitors will also see samples of their products, and have the opportunity to talk with the owner and staff. Special
08-25-2009 | Arts & Culture
KPAC
Grand Opening & Open House
Warren, NJ. August 19, 2009 -- KPAC’s Grand Opening and Open House will be held on Friday, Sept 11th from 4pm-7pm and on Saturday, Sept 12th from 10am – 12 pm. The community is encouraged to stop by to see the new facility, meet the staff, register for classes, or just say "hi." KPAC is located in Arch Plaza 51 Mt. Bethel Road - 2nd Floor in Warren, NJ.
Comments about openPR
OpenPR is clearly structured and remains true to its principle of confining itself to the essential parts. OpenPR has proven to be a very good and reliable partner to our media agency: Within the shortest time the releases are online and go down well with the media representatives. The success of OpenPR is reflected in the steadily increasing number of press releases. It is good that OpenPR exists!
Ursula Koslik, Director Marketing & PR, F+W Hamburg