Snap City Announces “And Then There Were 2” 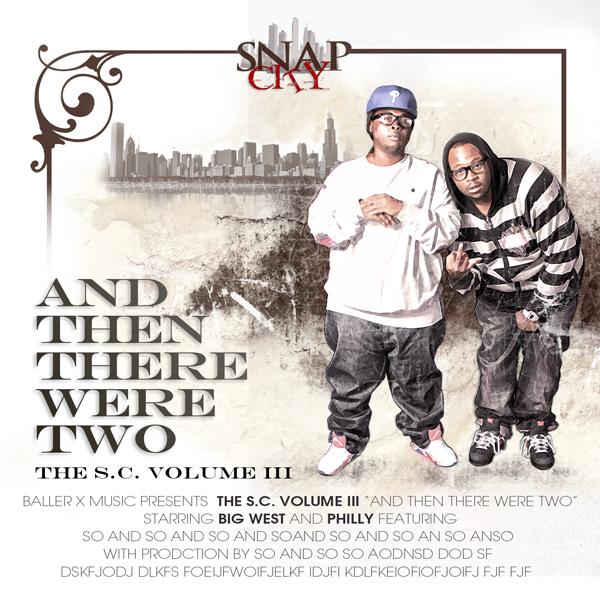 FOR IMMEDIATE RELEASE February 02, 2011 – (Miami, FL.)Originally, a quadruplet, Snap City has been on the scene since the early part of 2006. Beginning with their first release Realer Than Rap, the members of Snap entered the independent music community. By their second release All Eyes on We, the rap quadruplet had become a trio; but not without notable accomplishments. All Eyes on We was critically acclaimed generating interest from labels like Distributing The Peace, Poe Boy Music Group, Sony Music Group, amongst others. Through the turmoil and internal differences, Snap City is still going hard in the paint. Now, as a self proclaimed “Best Rap Duo,” Big West and Philly Doss release the highly anticipated And Then There Were Two street album. For this final installment of this mix tape SNAP CITY (now a duo) recorded over 50 songs over a little less than a years’ time. PHILLY DOSS says “This is our best work yet!” RASAAN “ROSCO” WEST who is also executive producer of the mixtape /street album explains “You’ll see that this is a solid album with no features, with half of the tracks produced by ABEL “AKWBEATS.COM” WEST who is also co executive producer and CO C.E.O of B.A.L.L.E.R X MUSIC”.To Download the "And Then There Were 2" go to www.snapcityhiphop.ning.com“In a Hip Hop World that is overpopulated with cookie cutter songs Snap City brings their distinctive blends of beats and profound lyrics to each track. This up and coming Hip Hop group out of Miami, Fl brings a gritty yet eclectic sound to the music scene. Big West (founder), and Philly Doss formed the group back in 2006 and have been making waves in Miami since then. Their ground breaking concepts and trendsetting rhymes are innovative and cutting edge. While their highly anticipated album is currently being recorded, the release of the The S.C.MIXTAPE SERIES " Realer than Rap", "All Eyes on We", AND THE MOST ANTICIPATED OF THEM ALL "AND THEN THERE WERE TWO" has created a buzz in the Hip Hop Community. Compared to groups like The Clipse, Dip Set and U.G.K., Snap City is preparing to take Hip Hop Nation by Storm.Press Contact: Young World Mgmt. Sunny Crosby 99 NW 183rd Street Suite # 227 C Miami Gardens, Florida 33169 Office: 305-942-8996

12-17-2012 | Arts & Culture
Young World Management
DJ H2 Extends a Special Invitation to His House Party An International Essential …
(MIAMI, FL.) DECEMBER 10, 2012 - As the year comes to a close, while most people are plotting on their New Year’s Resolution, DJ H2 is planning his house party. This is not your average “Cat’s away, so the mice will play!” house party. DJ H2 is on an international search for up and coming House Artists to be featured on his new release: the
05-24-2012 | Associations & Organizations
Young World Management
11th Annual Miami Peace Festival: Justice for All
August 11th, 2012 commemorates the eleventh annual (Urban Garden Foundation’s) Miami Peace Festival. This outdoor festival attracts over 30,000 people from all walks of life. The Miami Peace Festival creates a platform for music, various cultural foods, and crafts. Over the past 10 years, local and national independent artists, Local County Commissioners, activists, Pastors, families of the victims of violence, as well as A-List Celebrities and Athletes have taken the
11-15-2010 | Leisure, Entertainment, Miscel …
Young World Management
Jingle Jam arrives in the Midwest in a One Horse Open Sleigh
For Immediate Release November 9, 2010 - (Albuquerque, New Mexico) As the holidays draw near, it is a privilege to have a household brand that families embrace during these times. It's the 1st Annual Kiss 97.3 Jingle Jam Starring: Nelly, Pretty Ricky, New Boyz, and Lil Rob on Thursday, December 2nd, 2010 at the Santa Ana Star Center. Doors will open at 7pm. Nelly, Pretty Ricky, and the New Boyz are
10-29-2010 | Leisure, Entertainment, Miscel …
Young World Management
Rum Squad Entertainment: More than an Average Independent Label
FOR IMMEDIATE RELEASE October 27th, 2010 - (Miami, FL.) Rum Squad Entertainment: More than an Average Independent Label Rum Squad Music Group continues their Journey to force their way through the independent market that Miami has already conquered. Their rise to stardom started with a dream and a vision that continued straight into 2010. Each artist signed under the company has pledged their loyalty to the idea that Rum Squad will make an

09-21-2018 | Fashion, Lifestyle, Trends
Fekunda
Snip snap - hair off
You go to the hairdresser and look forward to a new hairstyle. But then your hairdresser says sorry, only the scissors help. The shock is deep. Does it really have to be? We don't want to let it come to that. Surely only the scissors help with split ends in the end, but first the hair can be protected, so that it does not come so far. Dr. Lanfermann® TRIPLEX is
10-16-2017 | Advertising, Media Consulting, …
business news
Torque Wrench Market 2017 - TONE, Proto, Snap-on, Norbar, Tohnichi
Apex Market Researchs, recently published a detailed market research study focused on the "Torque Wrench Market" across the global, regional and country level. The report provides 360° analysis of "Torque Wrench Market" from view of manufacturers, regions, product types and end industries. The research report analyses and provides the historical data along with current performance of the global Torque Wrench industry, and estimates the future trend of Torque Wrench market
09-28-2017 | Advertising, Media Consulting, …
HTF Market Intelligence Consulting Pvt. Ltd.
Snap Fastener Market Global Insights and Trends 2017 to 2022
A new research study from HTF MI with title Global Snap Fastener Sales Market Report 2017 provides an in-depth assessment of the Snap Fastener including key market trends, upcoming technologies, industry drivers, challenges, regulatory policies and issues, opportunities, future roadmap, value chain, ecosystem player profiles and strategies. The research study provides forecasts for Snap Fastener investments till 2022. This study answers several questions for stakeholders, primarily which market segments or Region
08-04-2017 | Business, Economy, Finances, B …
Global Snap Buttons
Global Snap Buttons Sales Market Report 2017
The Snap Buttons Industry 2017 Market Research Report is a professional and in-depth study on the current state of the Snap Buttons industry. Firstly, the report provides a basic overview of the industry including definitions, classifications, applications and industry chain structure. The Snap Buttons market analysis is provided for the international market including development history, competitive landscape analysis, and major regions’ development status. Secondly, development policies and plans are discussed as well as manufacturing processes and
04-10-2013 | Industry, Real Estate & Constr …
Schaltbau GmbH
Schaltbau GmbH: New snap-action switches for extreme applications
Munich, December 01, 2012: The new S926 and S970 snap-action switch series have been developed for use in severe environmental conditions. Their robust polyetherimide (PEI) housings make for greater resilience when exposed to extreme temperatures, improved resistance to chemicals and 50% more shock resistance compared with polycarbonate. The amber-coloured, transparent snap-action switches are highly suited for applications in which the impact forces involved require the materials used to withstand a great
03-25-2011 | Industry, Real Estate & Constr …
Access Display Group, Inc.
SnapFrames4Sale.com Offers Snap Frames in Length
Freeport, New York (March 24, 2011) B2B e-commerce site SnapFrames4sale.com now offers snap frame profiles in length to POP, sign and display fixture manufacturers who want to assemble their own snap display frames and save on shipping costs. Snap frames are front-loading display frame fixtures in which all four frame sides snap open for easy access to the printed materials on display. Once mounted to the wall, graphics are loaded in
Comments about openPR
9 o'clock: discuss press release with client, 10 o'clock: submit release to openPR, within the briefest possible time release is published and displayed in a prominent place on openPR.de. I am thrilled!
Zehra Spindler, Calypso Now! - Communication Agency