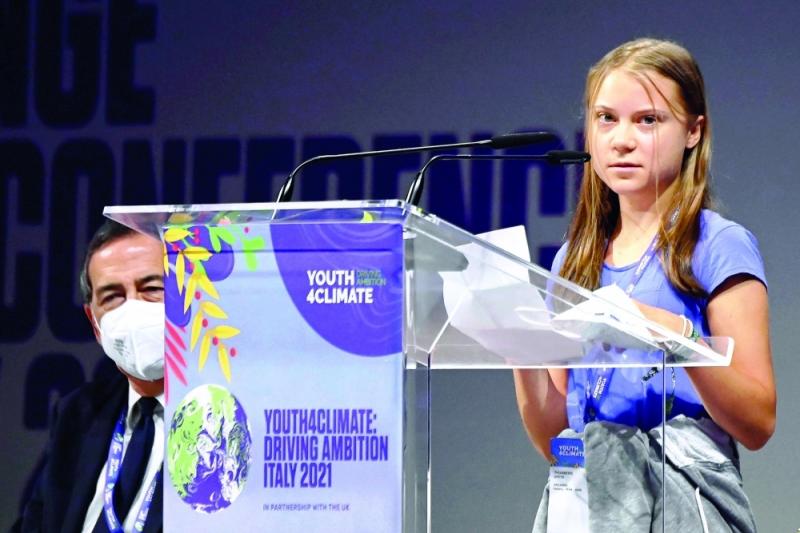 Pope Francis sent a message praising Greta Thunberg and the Youth4Climate conference that took place in Milan, Italy, from September 28 to 30, 2021. More than 400 young people from 197 countries met in Italy to “develop concrete proposals that will be presented to the ministers attending the Pre-COP and COP26.” In other words, this is a youth initiative to promote, mobilize and motivate world leaders to take action and implement stricter climate regulations to save the planet.Pope Francis “thanked” the Youth4Climate participants for their concern for the “environment” and for “challenging” the adult world. He also praised them for standing up and taking “action.” The Pope told the Youth4Climate participants: “In your journey I am with you and I encourage you to develop a sense of goodness for humanity.” So the Pope is with the Youth4Climate participants on their journey to promote green sustainability and in pressuring politicians to pass climate laws now.Who else is with the Youth4Climate initiative? Sadly, Adventist youth from Milan, Italy, also participated in this three-day conference. According to the official press services of the Federation of Evangelical Churches in Italy, young Seventh-day Adventists also joined other young Roman Catholics, Baptists, Lutherans and other churches for an ecumenical service called “Spiritual Ambition.” This interfaith youth gathering actually took place during the Youth4Climate conference and was part of their program. This part of the event was sponsored by the Federation of Evangelical Churches, the Council of Christian Churches of Milan, the Italian Episcopal Conference (an assembly of Roman Catholic bishops in Italy) and others.God’s plan to train our youth to finish the work is being derailed; thanks to church leaders who encourage and tolerate this. And instead of affirming our Seventh-day Adventist eschatology, instead of proclaiming the special truths of Revelation 14:6-12 (the Three Angels’ Message) as the only solution to our world’s current crisis, we are joining the ranks of the enemy and embracing the climate change movement – the same movement that is promoting the Pope’s green Sunday rest agenda. Tragically, our youngest and most vulnerable members are engaging in new purposes they never intended to do. This is what 60 years of ecumenism will do. It will take us on a “journey” with the Pope back to Rome.Click to read the full story: http://adventmessenger.org/pope-francis-praises-greta-thunberg-and-the-youth4climate-conference-an-event-in-which-seventh-day-adventist-youth-participated/Contact: Andy Roman, Publisher Address: Advent Messenger, PO Box 96, Dover, OK 73734 Phone: (888) 299-2119 Website: www.adventmessenger.org Email: adventmessengers@gmail.comAbout: Advent Messenger provides news and commentary on current events, top stories, social trends and political and religious events. For more news visit www.adventmessenger.org

You can edit or delete your press release Pope Francis Praises Greta Thunberg and the Youth4Climate Conference, an event in which Seventh-day Adventist Youth Participated here

11-21-2020 | Leisure, Entertainment, Miscel …
Advent Messenger
Fratelli Tutti: Ganoune Diop Praises Pope Francis’ Encyclical
The pope is working overtime to unite all of the religious faiths of the world into one family. Pagans, spiritualists, Mother Earth worshippers, homosexuals, Protestants, Catholics, indigenous faiths and eastern religions are all part of Rome’s one-world brotherhood. Truth and doctrine no longer matter anymore according to the Pope’s encyclical, Fratelli Tutti. Just yesterday, Roman Catholics, Evangelicals, Orthodox and Seventh-day Adventists gathered to praise Fratelli Tutti. Over thirty religious leaders
02-22-2019 | Arts & Culture
Wiedmann Media AG
Pope Francis receives unique Bible translation from Germany
Rome / Stuttgart. Faith can move mountains. In this case, the saying goes even beyond death. At the general audience, in the audience hall Paul VI in Rome, Pope Francis received the number ONE of the limited Wiedmann Bible ART edition on February 20th. The original is worldwide unique. It is a visual narrative of the Bible depicting the Old and New Testament in 3,333 illustrations. A printed copy of
09-13-2012 | Health & Medicine
Altitude Marketing
CGIRB promotes Dawn Pope to Chief Operating Officer
September 6, 2012 – Research Triangle Park, N.C. – Copernicus Group IRB (CGIRB), a leading independent institutional review board, today announced the promotion of Dawn Pope to Chief Operating Officer. In her new position, Ms. Pope will provide leadership and direction for the overall operations of the company, planning and coordinating the development of strategic objectives and goals. Ms. Pope came to CGIRB from Clinical Trials Support Services, Inc., in 1998.
04-28-2011 | Politics, Law & Society
Androvett Legal Media
Texas Center for Legal Ethics Names 2011 Pope Awards Recipients
AUSTIN – The Texas Center for Legal Ethics is pleased to announce this year’s winners of the Chief Justice Jack Pope Awards: Federal Judge Will Garwood and Austin attorney William Hilgers. The Pope Awards are given each year to one judge and one lawyer who epitomize the highest standards of professionalism and integrity. The awards honor one of the founders of the Texas Center for Legal Ethics, former Chief
02-02-2011 | Science & Education
EsoGuru
UFO Investigator Nick Pope discusses the Real X Files
The event Nick Pope will begin the lecture by giving an overview of the British government’s involvement with the UFO phenomenon, which dates back to 1950, when the Ministry of Defense established a small committee to examine the phenomenon, known as the Flying Saucer Working Party. He will explain government policy on this issue and detail the way in which investigations were carried out. Nick Pope will then discuss a number of cases
09-26-2006 | Politics, Law & Society
Imperato-Brooks 2008
Vatican News: Papal Knight Speaks on Pope Benedict XVI and Religious Freedom
Los Angeles – September 24, 2006 - Today Papal Knight and 2008 US Presidential Candidate Daniel Imperato spoke out regarding the recent statements of Pope Benedict XVI and religious freedom. “I call on the world today, particularly the Christians and the Muslims, to realize that our Pope Benedict XVI has made a mistake in addressing the issue of Prophet Muhammad during his trip to his hometown Regensburg, Germany.
Comments about openPR
9 o'clock: discuss press release with client, 10 o'clock: submit release to openPR, within the briefest possible time release is published and displayed in a prominent place on openPR.de. I am thrilled!
Zehra Spindler, Calypso Now! - Communication Agency