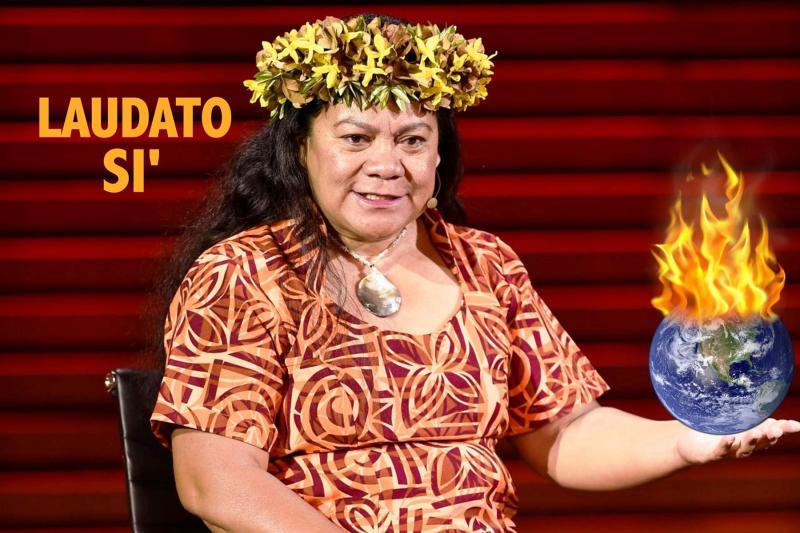 Adventist Record is the official news source for the South Pacific Division of Seventh-day Adventists. On September 30, 2021, Adventist Record published a story about a Seventh-day Adventist named Pelenise Alofa, a graduate of Pacific Adventist University in Papua New Guinea and Avondale University in Australia. The story went on to describe how Pelenise Alofa received a “Commonwealth Points of Light” award from the UK Prime Minister’s office for her work and dedication in raising awareness of the climate change crisis on an “international level.” The local news media in Fiji describes Pelenise Alofa as “one of the foremost advocates for climate action from across the Pacific.” In an interview with the Fiji Sun, Pelenise Alofa gave credit for this “Commonwealth Points of Light” award to her “mentors,” her “pikininis” (children) and her “partners in climate change action.” Who are Pelenise Alofa’s mentors? One of these mentors is an organization that is calling people to join Pope Francis for Laudato Si’ Week. Pelenise Alofa’s pikininis are young climate change activists who traveled to the Vatican to celebrate the leadership of Pope Francis and His encyclical on climate change, Laudato Si’. And who are her partners? Her partners consist of several organizations that praise Pope Francis and “wholeheartedly” stand with him and his encyclical. Adventist Record is promoting a Seventh-day Adventist climate activist who has ties to the Laudato Si’ climate movement. We are providing a platform to church members who are actively working with others to implement Pope Francis’ encyclical, Laudato Si’. And the Pope’s encyclical calls for Sunday to be the day of rest for creation. Have those who are helping to establish the mark of the beast now become the new heroes of Adventism? How do we promote Saturday, the true Lord’s Day, and Sunday, the Catholic day of rest at the same time? Can anyone explain that? It is incomprehensible that Seventh-day Adventists can turn their backs on God’s message, the Three Angels’ Messages, and dedicate their lives to promoting the climate change message of Laudato Si’, the Pope’s green Sunday law. Why can’t our church publications and the leaders who run our media see this major conflict of interest? You cannot mix the faith of the remnant people with the wine of Babylon. Rather than promoting the heresies of Laudato Si’, we must warn people to flee from the wrath that will come if they receive the mark of the beast. Click to read full story: http://adventmessenger.org/the-south-pacific-division-recognizes-the-achievements-of-a-seventh-day-adventist-climate-activist-who-is-part-of-the-laudato-si-climate-movement/Contact: Andy Roman, Publisher Address: Advent Messenger, PO Box 96, Dover, OK 73734 Phone: (888) 299-2119 Website: www.adventmessenger.org Email: adventmessengers@gmail.comAbout: Advent Messenger provides news and commentary on current events, top stories, social trends and political and religious events. For more news visit www.adventmessenger.org

05-19-2021 | Leisure, Entertainment, Miscel …
Advent Messenger
The Seventh-day Adventist Church in Spain has Fully Committed Itself to Laudato …
The Spanish Union of Churches Conference is the headquarters of the Seventh-day Adventist Church in Spain. Its official news magazine is called Revista Adventsita España. Esther Azón, co-editor of Revista Adventista España, recently wrote a short article and provided a link to a 102-page report revealing that Seventh-day Adventist institutions within her union have been participating in government sponsored, ecumenical, climate change initiatives. These initiatives are promoting and implementing the
01-26-2021 | Leisure, Entertainment, Miscel …
Advent Messenger
Adventist Health Allows its Physicians to Perform ‘Gender Transition’ Servic …
Adventist Health allows its physicians to perform gender affirming surgeries such as mastectomies and hysterectomies for transgender men (women transitioning into men) at its facilities. Also, “within” the Adventist Health “system,” physicians can provide gender-affirming hormone therapy. This information was disclosed by the California State Attorney General’s Office. All of this came to light as a result of Adventist Health’s plan to take over Delano Regional Medical Center in 2019. Because
12-11-2020 | Leisure, Entertainment, Miscel …
Advent Messenger
Another Adventist Institution Just Received Funding from Abortion Money
Seventh-day Adventist institutions have a long history of receiving money from the abortion business. Different news reports have revealed that institutions such as Loma Linda University and La Sierra University have received funding from abortionist, Dr. Edward C. Allred. [1] Dr. Allred has claimed to have personally performed more than 250,000 abortions. At one point, his abortion clinics performed 1/3 of all abortions in California and generated tens of millions
09-05-2020 | Leisure, Entertainment, Miscel …
Advent Messenger
Stop the Roman Catholic Indoctrination of our Seventh-day Adventist Youth in Eur …
The Taize Pilgrimages are annual ecumenical gatherings created for young people. About 20,000 young people attend each of the Taize Pilgrimages organized by the Roman Catholic Monk, Brother Alois. Their non-doctrinal unity of brotherhood is in line with the Vatican’s agenda on ecumenism. Pope Francis loves this religious order. Prayers, chanting, singing and sentimentality form the perfect faith without creeds where everyone can unite. Francesco Mosca is the Seventh-day Adventist
08-26-2020 | Leisure, Entertainment, Miscel …
Advent Messenger
An Independent Seventh-day Adventist Media Ministry is Being Censored for its Co …
Conservative groups and opinions are being targeted on social media platforms. Big tech companies such as Google, Facebook and Twitter are censoring people for expressing socially conservative views or for sharing content that does not contain a certain politically correct tone. Tyrannical governments are now in bed with tyrannical media giants. The goal is to control the information. A small group of people want to determine what is and what isn’t
03-26-2020 | Leisure, Entertainment, Miscel …
Advent Messenger
While Pope Francis Venerates Mother Earth, Adventist Health wants You to Connect …
Pope Francis is attributing the current global crisis to man's damage to the environment. On Sunday, March 22, 2020, Pope Francis did an online interview with the journalist Jordi Evolve. The Pope was asked about the condition of our planet and if the current global crisis was nature's judgment upon humanity. In a recent video the Pope responded by venerating nature with his pantheistic philosophies: "There's a saying that you surely
Comments about openPR
OpenPR is clearly structured and remains true to its principle of confining itself to the essential parts. OpenPR has proven to be a very good and reliable partner to our media agency: Within the shortest time the releases are online and go down well with the media representatives. The success of OpenPR is reflected in the steadily increasing number of press releases. It is good that OpenPR exists!
Ursula Koslik, Director Marketing & PR, F+W Hamburg