ADC Has Curative Effect On Cell Surface Protein In Neuroblastoma 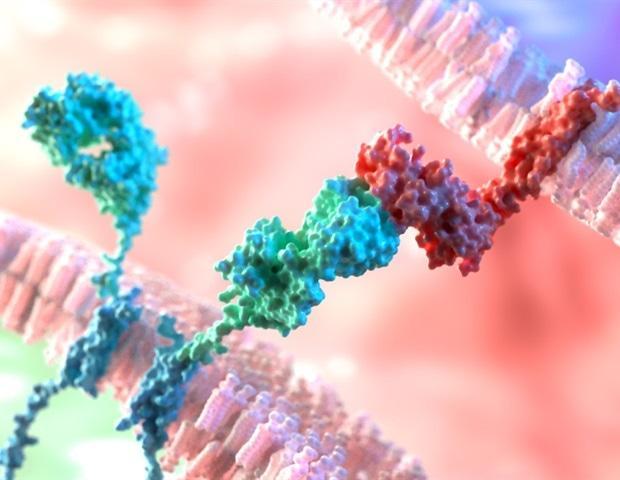 Physician-scientists in the Cancer Center at Children's Hospital of Philadelphia (CHOP) have developed a preclinical, potent therapy attached to an antibody that targets a surface protein expressed in most childhood neuroblastomas, effectively killing cancer cells.The researchers published their findings today in Science Translational Medicine. In 2008, researchers discovered mutations in the anaplastic lymphoma kinase (ALK) gene as the major cause of the inherited form of neuroblastoma and showed that these same mutations are present in about 14 percent of neuroblastoma tumors from patients with the most aggressive form of this disease. This established ALK as a druggable target in neuroblastoma and provided the rationale for the clinical development of ALK inhibition therapy. It was found that native ALK (in the absence of a mutation) is present on most neuroblastoma tumors, providing us with an exciting opportunity to target ALK in the majority of patients.Neuroblastoma, a pediatric cancer of the developing peripheral nervous system that usually occurs as a solid tumor in a child's chest or abdomen, is the most common cancer in infants, and accounts for more than 10 percent of all childhood cancer deaths. Children with the high-risk form of the disease continue to have a poor prognosis, despite intensive drug therapy.Mossé, a pediatric oncologist and researcher at CHOP along with other scientists in her lab, demonstrated that the ALK protein appears on the surface of most neuroblastoma cells and is not detectable on normal cells, indicating that ALK is a useful target for immunotherapy. Researchers worked with pharmaceutical colleagues to weaponize an antibody-drug conjugate (ADC), one of a rapidly growing class of anticancer agents. That ADC, called CDX-0125-TEI, combines a specific monoclonal antibody engineered to recognize ALK with a potent chemotherapy drug—an alkylating agent called thienoindole (TEI).In cell cultures and animal models of neuroblastoma, the ADC-ALK approach killed neuroblastoma cells, with no discernible toxicity to healthy cells. "The goal of this approach is to harness the presence of ALK to precisely deliver a poison only to the cancer cell, without harming the healthy surrounding cells," said Mossé. "This study is proof of concept that the ALK protein is a good immunotherapy target and, as we optimize this approach for the clinic, has the potential to be useful for the majority of aggressive neuroblastomas and to minimize the harsh consequences of therapy," said Mossé.She added, "In addition, our research could have great relevance for other cutting-edge immunotherapeutic strategies, such as CAR T-cell therapy, that harness the immune system to kill cancer, and is currently showing tremendous efficacy in children with leukemia. Our new data support clinical development of an immunotherapy drug not just for neuroblastoma, but for other hard-to-cure childhood cancers expressing the ALK gene, including rhabdomyosarcomas."Biopharma PEG provides GMP standard PEG derivatives and bulk orders via custom synthesis, offering the opportunity to match customers’ special quality requirements. Biochempeg is dedicated to providing a chemical synthesis and high-quality ADC linkers. ADC linkers with molecular weights, branching, and functional groups not listed in our online catalog may be available by custom synthesis.Biopharma PEG Scientific Inc. Address: 108 Water Street, Room 4D, Watertown, MA 02472, USA TEL: 1-857-366-6766 Fax: 617-206-9595 Email: sales@biochempeg.comBiopharma PEG is a biotechnology-oriented company in Watertown, Massachusetts. We are dedicated to manufacturing and supplying high purity polyethylene glycol (PEG) derivatives and reagents, monodisperse PEG, Click Chemistry reagents,  PEGylation services and  custom PEG derivative synthesis to clients worldwide. These PEG reagents have been widely used in bioconjugation, antibody-drug conjugates (ADCs) therapeutic, drug delivery and diagnostics field.

11-23-2021 | Business, Economy, Finances, B …
Biochempeg Scientific Inc.
Sacituzumab govitecan shows promise in treating the most aggressive type of brea …
A unique antibody drug conjugate (ADC), which delivers a high dose of a cancer-killing drug to tumor cells through a targeted antibody, has been found in a global phase 3 clinical study to nearly double the survival time of patients with refractory metastatic triple-negative breast cancer. The study of the ADC drug sacituzumab govitecan (SG), for which Massachusetts General Hospital (MGH) was a lead clinical research site after serving as
08-02-2021 | Business, Economy, Finances, B …
Biochempeg Scientific Inc.
What Factors Are Affecting The Effect of Cancer Treatment?
With social development and medical advances, people are living longer, but with that, many diseases are becoming more common, such as cancer. In 2020, there will be 19.3 million new cases of cancer and nearly 10 million deaths worldwide; and by 2040, the number of new cases is expected to reach 28.4 million, an increase of 47% from 2020. Unlike common diseases such as colds and coughs, cancer is a more
07-01-2021 | Business, Economy, Finances, B …
Biochempeg Scientific Inc.
The Advantages of Monodisperse PEG In Drug Development?
Monodisperse PEG products usually are organic compounds with a molecular weight of less than 1000. Monodispersed PEG linkers are pure compounds with a single molecular weight. In contrast, polydisperse PEGs linkers contain variations in molecular weight with an average molecular weight. The use of polydisperse PEGs linkers in drug development has led to problems in biological applications due to steric hindrance and binding. With advancements in both synthetic and purification chemistry over the
06-01-2021 | Business, Economy, Finances, B …
Biochempeg Scientific Inc.
PEG Products Used As Ingredients In Pfizer-BioNTech COVID-19 Vaccine
The Pfizer-BioNTech COVID-19 mRNA vaccine (Tozinameran or BNT162b2) is used to protect against COVID-19. This disease is caused by severe acute respiratory syndrome coronavirus 2 (SARS-CoV-2). The vaccine is approved for people who are 12 years of age and older. Its safety and effectiveness in people younger than 12 years of age have not yet been established. Health Canada first authorized this vaccine with conditions on December 9, 2020, under the Interim