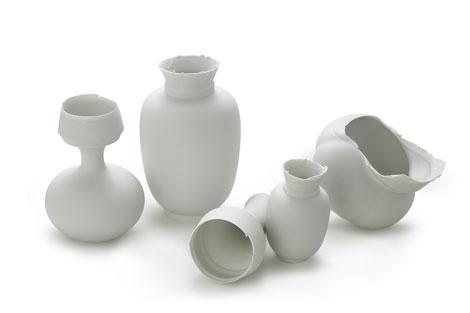 With its “Embassy”, the VIENNA DESIGN WEEK opens its temporary branch from June 3 to 7 at the International Design Festival DMY in Berlin for the second time. Design highlights of last year’s Passionswege (Paths of Passion), the central part of the festival programme, will be on display. In the framework of “DMY Allstars”, three young designers present experimental projects that were developed in collaboration with traditional Viennese companies. The VIENNA DESIGN WEEK Embassy wants to tempt visitors to come to Vienna during the third edition of the design event from October 1 until 11. “City Shades” by Maxim Velčovský and J. & L. Lobmeyr The “City Shades” by Czech designer Maxim Velčovský and the glass-chandelier-manufacturer J. & L. Lobmeyr already caused a stir internationally. In February, the backlit cityscapes made of glass and chandelier parts were granted the Wallpaper Design Award 2009 in the category “best commission”. Each year, the magazine awards this prize to “the very finest things that caught our collective eye over the last year”. Moreover, three of the cityscapes travel to the most important European tourism fairs accompanied by the Vienna Tourist Board. “Cap’s” by Marco Dessi and Augarten Porcellain In his presentation “Cap’s”, the young South Tyrolean Marco Dessi toys with the mostly invisible production process of porcellain. Together with Augarten, tradition-steeped Austrian porcellain manufacturer, the designer changes conventional fabrication techniques and thus creates new objects as well as a special edition. At the beginning of 2009, Dessi was selected by the American I.D. Magazine as one of “40 bright, young designers”. Chandelier-Performance by Megumi Ito and Altmann & Kühne Megumi Ito, a Japanese living in Austria, impresses with extraordinary lamp design. For the Passionswege 2008, she developed a comprehensive installation in the premises of Confectionery Altmann & Kühne that were originally designed by Josef Hoffmann. In her live performance in Berlin, Ito will convert fabrics by Austrian textile producer Backhausen that present motives of the confectionery into lampshades and objects. The “work in progress” can be experienced from June 3 to 5. The luminaires will then be on display for the whole Embassy period (until June 7). The showcasing of VIENNA DESIGN WEEK Embassy is made possible by the kind support of Vienna Tourist Board and Kulturforum Berlin. Design Ambassadors of VIENNA DESIGN WEEK Embassy Marco Dessi - www.marcodessi.com Megumi Ito - www.ito-megumi.com Maxim Velčovský - www.qubus.cz The aim of VIENNA DESIGN WEEK is to show and enable people to experience the many-faceted creative work in the fields of product, furniture and industrial design, but also positions of experimental design. After two successful festivals in 2007 and 2008, the work of numerous designers from Austria and abroad will also be presented from October 1-11 with a growing programme of events. International Design in Vienna In cooperation with many partners – from Vienna museums to production and retail companies to designers from all over the world – the whole of Vienna will become a platform and showplace of design throughout the ten days. VIENNA DESIGN WEEK therefore also has less the character of a trade fair but instead offers a variety of venues and approaches specific to Vienna. International but localised, that is the motto – whereby the international element is particularly in the forefront. The invitation to designers and cooperation projects from the region is intended to make a contribution to the long overdue progress in networking in the field of design. Discussing and Celebrating Design Here "design" in no way means only an external aspect of the "shaping" of individual objects. Design has been and is much more an important field in the production of culture: it shapes our material culture, our everyday life and our consumer world, it influences our lifestyles and fashions and most fundamentally our aesthetic sense and judgements. This wide-ranging impact is a reason both to celebrate design and to examine it critically, and VIENNA DESIGN WEEK has made both of these its mission. Time for Experiments The festival aims to reveal creative and production processes and encourage experimental work on the spot. It also presents and promotes design that in the first instance withdraws from the scheme of utility value and functionality in order to create awareness and pose questions or also simply just to have fun. The exploration of materials, mood values and the interaction between people and objects is at the centre of design and should have its assured place at the festival. International Festival and Viennese Culture Event With exhibitions, venue-specific installations, theme specials, discussion events, a programme of films and, of course, enough opportunity to party, VIENNA DESIGN WEEK is not only an attraction for the international design scene but most explicitly also aims to interest and appeal to a wide public audience of Viennese and visitors to Vienna. This year VIENNA DESIGN WEEK goes into the third round with the wish and the aim to take up a firm place on the international festival scene and at the same time become a fixed early-autumn cultural event in Vienna. Festival Website: www.viennadesignweek.at Press Information: www.viennadesignweek.at/press Press Contact juicy pool. communication Franziska Gerner T: +43 1 481 54 54 50, F: +43 1 481 54 54 11 E: franziska.gerner@juicypool.com

08-25-2009 | Arts & Culture
VIENNA DESIGN WEEK
VIENNA DESIGN WEEK 2009 presents installations and products by international des …
Including Arik Levy with Swarovski Crystal Palace and new products by Michael Young alongside numerous other highlights from October 1st to 11th in Vienna From October 1st to 11th, the third VIENNA DESIGN WEEK attracts anew stars of the international design scene as well as promising newcomers. Arik Levy (IL/FR) is visiting Vienna with “Chaton Superstructures” and “TableScape Jewellery”, two of his projects developed in cooperation with Swarovski Crystal Palace, which
Comments about openPR
Your portal is fast, simple, and easy to use. Others may have more functions but they also demand more editing time, you have to preformat the text in order to achieve a good result etc. I think openPR is really fantastic!
Andreas Knepper, wallmedien AG