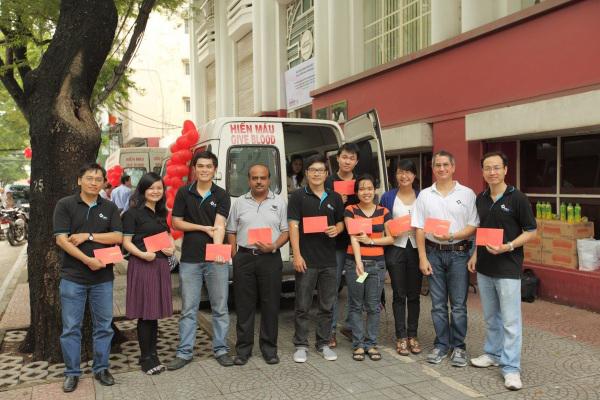 07-26-2018 | Media & Telecommunications
Matrix ComSec
Matrix participating in Secutech Vietnam 2018 held at the Saigon Exhibition & Co …
Matrix will be exhibiting its enterprise grade Video Surveillance, Time-Attendance and Access Control solutions at the Secutech Vietnam 2018. Matrix will take this opportunity to unveil our recently launched Extreme series of Network Video Recorder (NVRX) at the event. Equipped with 4K Decoding Capacity and intelligent software, the NVRX gives high resolution video streams and sends instant notifications for real-time security. It is also backed with characteristics like Cascading (up to
02-20-2013 | Leisure, Entertainment, Miscel …
Park Hyatt Saigon
Back for an Encore Visit, Park Hyatt Saigon Is Pleased to Present the Return of …
Park Hyatt Saigon proudly presents the return of Rié Furuse as the resident entertainer in Park Lounge. Growing up in Japan, Rié started her musical repertoire playing piano at the early age of 3, then mastering the flute at 12. Because of such admiration for Patti Austin, Lorez Alexandria and Renata Mauro, her growing interest dictated her future vocation. Taking matters into her own hands, she proceeded to take vocal
01-24-2013 | Tourism, Cars, Traffic
Park Hyatt Saigon
Park Hyatt Saigon is pleased to present Federica Brugnara as the new Director of …
Park Hyatt Saigon is pleased to present Federica Brugnara as the new Director of Sales and Marketing. An Italian national, Federica completed her studies at the University of Trieste, Italy, with a Master in Tourism Management. She brings over 8 years of experience in 5-star hotels, focusing on the MICE and Corporate market. Prior to joining Park Hyatt Saigon, Federica gained her experience in Park Hyatt Beijing and Park Hyatt
10-23-2012 | Leisure, Entertainment, Miscel …
Park Hyatt Saigon
Park Hyatt Saigon Welcomes Back to the Stage - Mary Beth Ancheta
Park Hyatt Saigon is excited to welcome back the talented, Mary Beth Ancheta. A Canadian singer, songwriter, composer and pianist, Ancheta’s individual sound has proven to be extremely versatile due to her many musical influences. Her artistry is demonstrated through unique melodies, intuitively mixing and matching musical compilations. Growing up in Hamilton, Ontario, Ancheta taught piano at the Ontario Conservatory of Music where she attended McMaster University obtaining her B.A. in
10-23-2012 | Leisure, Entertainment, Miscel …
Park Hyatt Saigon
Opera Tempts With Terrace Tapas And Peroni Beers at Park Hyatt Saigon
Eat, drink, and share at Opera’s new dining concept, “Terrace Tapas and Peroni Beers”. Located at Park Hyatt Saigon, this premier alfresco dining venue offers colourful Mediterranean tapas incorporating vibrant flavour combinations, seasonal ingredients and great value. Based on the simple premise of supplying tasty food, cold beverages, and exceptional service, Opera’s outdoor terrace is the perfect environment to foster friendly conversation and interaction. Guests can feast
10-25-2010 | Tourism, Cars, Traffic
VNB Travel
30% off for a 4 star room in Saigon, Vietnam
New Pacific Hotel in Saigon is an international standard 4-Saigon star hotel with 12 stories and 112 luxury rooms. It is designed with meticulous attention to detail and meet the highest standards of traveler. Moreover, with French architecture and the latest equipment, New Pacific Hotel will make you feel comfortable at your home during Saigon travel. Now, when making any booking at New Pacific Hotel, you will receive a 30% discount
Comments about openPR
OpenPR is clearly structured and remains true to its principle of confining itself to the essential parts. OpenPR has proven to be a very good and reliable partner to our media agency: Within the shortest time the releases are online and go down well with the media representatives. The success of OpenPR is reflected in the steadily increasing number of press releases. It is good that OpenPR exists!
Ursula Koslik, Director Marketing & PR, F+W Hamburg