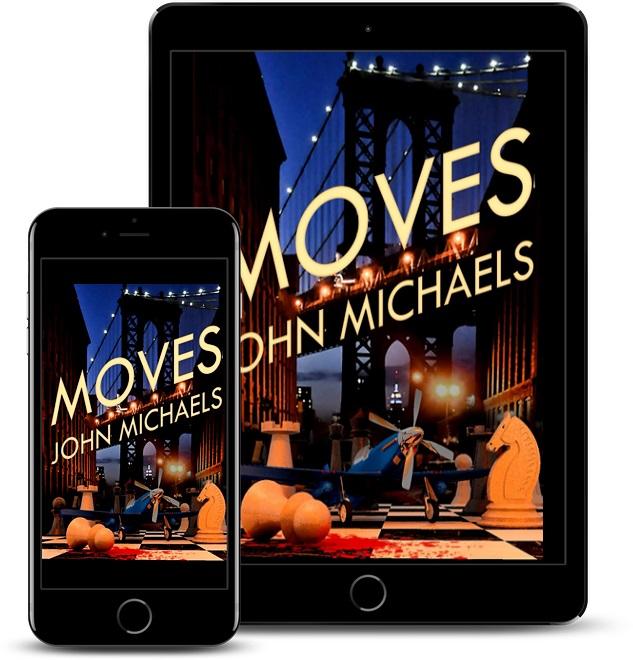 Author John Michaels Promotes His Crime Mystery Novel - MovesAuthor John Michaels is pleased to announce the promotion of his crime, mystery, thriller - Moves.“Intense, incredibly detailed, twisted, unpredictable and thrilling.” - Amazon ReviewIn the blink of an eye, Robert Jake’s perfect life became hell.Jake, a radio talk show host with a pregnant wife, had the perfect life until, in a moment of “Patriotic Stupidity” he decided to stop talking for a living and start shooting to help his country.Deployed to Iraq, he barely made it home alive, shot-up and full of shrapnel, after a fatal ambush.Moves is a mixture of single parent meets thriller, action, and suspense in bucket loads. If you like intrigue, plots with twists and turns, a little bit of romance and a story that keeps you holding your breath until the very last page; read on. Moves is a chess game of a page turner, where each chapter keeps you trying to outguess the killer.Moves is available for purchase in print and ebook formats. Book Information: Moves By John Michaels ISBN: 979-8535322360 ASIN: B01I5N46I0 Pages: 490 Genre: Mystery, Crime, ThrillerAbout the Author: After many successful years in the broadcasting world, working as a sought-after radio personality, John Michaels was prompted into a writing career by a casual remark over a meal in a restaurant.John’s former girlfriend gets credit for putting the writing bug in his head. They were having lunch and she was reading the first part of a memoir he had written. She reached over and stopped his fork midway between food and mouth and said, “This is terrific.” Five minutes later, she kept another fork from reaching its destination with, “You should write a novel. Make it a crime novel. It’ll be good.”His first novel, ‘Moves’ was just that, a fast-moving thriller. However, it took him 12 years to finish, but he had really good excuses.When he began to write, there were huge amounts of time when he had no time. Throat cancer surgery and subsequent radiation capped off with a subdural hematoma wiped out an entire year. Months were spent learning how to put a book together. Reading Steven King’s ‘On Writing’ helped.John has had a love of the science fiction genre which he got into at the age of 10. He is following his passion for reading and taking it into writing, He is already working on his second novel which will be a sci-fi.As a reader, his favorite Sci-Fi authors are Robert Heinlein, Issac Asimov, Carl Sagan, Arthur C Clarke, Ray Bradbury and a lot more.Away from sci-fi, he loves Elizabeth Kolbert, Lee Child, Barry Eisler, Michael Connelly, John Sandford, Walter Isaacson and a hundred other talented women and men who offer you an escape into whatever world they have created.Contact: BookBuzz: http://bookbuzz.net/blog/mystery-crime-thriller-moves-by-john-michaelsMystery, Crime, Thriller, BookBuzz, Moves, John MichaelsBookBuzz.net 59 Heritage Way Drive Rome, GA 30165Website: https://bookbuzz.net/blog/mystery-crime-thriller-moves-by-john-michaels/BookBuzz.net helps indie authors, hybrid authors, and small publishers promote and market their books. They also help with book reviews, publicity, and more. Promote your upcoming release, your new release, your back list titles, your kindle countdown deal, and much more. They offer NetGalley listings, book reviews, BookFunnel promos, and free book giveaways. Let's Create Some Buzz For Your Book!!!

10-08-2018 | Business, Economy, Finances, B …
OMA Emirates
OMA Group Moves Head Office
Sharjah, United Arab Emirates, October 2018: OMA Group recently announced its move to their new office building premises which is just behind King Faisal Mosque in Sharjah, UAE occupying an area of 60,000 sq ft. As part of the Al Owais Group of Companies, OMA Emirates along with other subsidiaries of the group would now work under one roof. This move was a part of their expansion strategy
02-19-2018 | Industry, Real Estate & Constr …
Fritz Becker KG
Formfleece moves into cabinets
ZOW 2018: Visitors of the fair show great interest in Becker’s new moulded wood, Formfleece and acoustic solutions Bad Salzuflen / Brakel, Germany. "From our point of view, the suppliers’ fair ZOW with its new concept was a complete success," concludes Gerrit Becker, managing director of the moulded wood specialist Becker in Brakel, Germany, world market leader in the production of moulded wood and Formfleece. The ZOW in Bad Salzuflen (North Rhine-Westphalia)
08-26-2013 | Energy & Environment
EITEP - Euro Institute for Information and Technology Transfer in Environmental Protection GmbH
Pipeline Technology Conference, ptc moves to Berlin
Having grown up as part of HANNOVER MESSE, Europe’s leading pipeline conference and trade show, Pipeline Technology Conference (ptc), will move to the capital Berlin next year. The ptc has grown steadily over the years and, in addition to the conference itself and the accompanying exhibition, it is now also directly followed by several special workshops and in-depth seminars. International participants from over 30 different countries use the opportunity to
10-10-2012 | IT, New Media & Software
MACS Software Ltd.
MACS Software moves into the Turkish market
MACS Software, one of the UK’s leading international suppliers of Warehouse Management Software, has appointed Piramit Bilgisayar Elektronik as its distributor in Istanbul to supply the buoyant Turkish market. Turkey is recognised as one of the world’s fastest growing economies with good opportunities for WMS technology to support the country’s booming consumer and export markets. Tony Liddar, Managing Director of MACS Software, explained what he was looking
07-17-2012 | Industry, Real Estate & Constr …
Bizerba GmbH & Co. KG
Bizerba's US label factory moves
Expansion of capacity due to excellent order situation Bochum, 6.July 2012 – Bizerba labels are a real sales success in the USA! Turnover has increased rapidly in the past four years. In order to keep up with the high volume of orders, the production site was moved in March 2012: the new Bizerba factory is situated in Joppa in the state of Maryland and is twice the size of its predecessor
11-26-2009 | Industry, Real Estate & Constr …
Pokolm Frästechnik GmbH & Co. KG
Spinworx® - AND YET IT MOVES
Hermesmeyer & Greweling from the town of Marienfeld near Gütersloh has a lot of professional knowing in milling operations. Founded in 1982 from Hubert Hermesmeyer and Herman Greweling, the company is well known for its expertise in milling strategies for mechanical and plant engineering, mould- and tool-making as well as machine building.High-performance software and an integrated cross-linked machinery of NC- and highspeed machines of well-known manufacturers guarantee flexibility and prime
Comments about openPR
OpenPR ist the nicest and most clearly laid out PR platform I have seen to this day. The press releases are displayed very nicely and clearly and without any unnecessary frills. The updates are fast and the finished release looks appealing and is clearly legible. Even with 16 years of experience one discovers new things from time to time. Congratulations!
Gabriele Ketterl, Director Marketing & PR, Menads