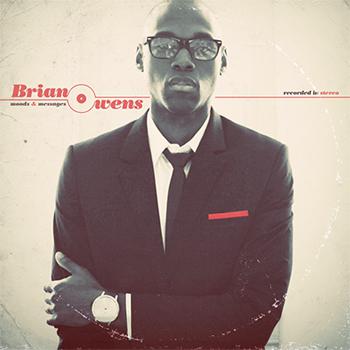 An exclusive license agreement has been reached between SWEET SOUL RECORDS and Destin 2B1 Records, LLC, representing soul singer Brian Owens, allowing Japan distribution of his first major release “Moods & Messages,” in both physical and digital formats.Tokyo, Japan: Today, SWEET SOUL RECORDS, parent company lifesound, Inc., officially announced that an agreement has been reached with Missouri-based Destin 2B1 Records, LLC for nationwide distribution of the album “Moods & Messages,” by Brian Owens.“Moods & Messages,” set for release on September 26, 2012 in partnership with distributor BBQ Records, contains 10 soulful tracks plus four Japan-exclusive live bonus tracks from Brian Owens, the new voice of American soul. Raised in St. Louis, Brian’s music reflects a city infused with blues, soul and funk, resulting in a style that is distinctly his own, yet reminiscent of artists like Marvin Gaye, Al Green, and Otis Redding, who laid the foundation for Grammy Award winning, R&B soul artists like D’Angelo, Maxwell and Raphael Saadiq. Now, joining that class is Brian Owens. “I want to be my own voice, but in a way that’s familiar to people. So I welcome the comparisons because it means that people take comfort in my influences.” Owens says. As one of the lead singers of Sidewinder, the Air Force band that became a YouTube web sensation with more than 2.5 million views and swept up a flurry of media attention for their version of soul-pop singer, Adele’s “Rolling In The Deep,” Brian has been featured on national television shows like The Ellen DeGeneres Show and Entertainment Tonight. And he is determined to balance the media attention with a level head. “I’m very excited about the exposure,” Brian says. “Positive exposure is always good, even when I’m not at the forefront. I believe it will come back to me in a good way.”“Moods & Messages” is a self-proclaimed soundtrack to his journey as a soul artist. With the backing of St. Louis-based Destin 2B1 Records and distribution through New York-based BDG/RED, a Division of Sony Music Entertainment, Owens says, ““Moods & Messages” is about balancing out how we feel and what we give out to the world in terms of feelings. These feelings often conflict, but you have to choose what your life will say, despite how you feel… It’s about making choices.”The album displays Brian’s personal choices — serving in the military, becoming a husband and father, and performing — as they constantly shape his music into messages that are encouraging, thought-provoking, and touching. From social awareness to loving tributes to family, Brian masters the art of effortless lyrics and melodies to deliver messages that are powerfully relevant.“Moods & Messages” will be released in Japan-wide by SWEET SOUL RECORDS on September 26, 2012.About SWEET SOUL RECORDS SWEET SOUL RECORDS, parent company lifesound, Inc., is based in Tokyo and our main goal is to promote soul music in Japan in all its forms. We are doing this by creating our own brand of soul music, and at the same time, promoting international artists who we feel can help increase the number of loyal Japanese followers by spreading “real music.”Contact: SWEET SOUL RECORDS: info@sweetsoulrecords.com Website: http://www.sweetsoulrecords.com/ Phone: +81 3 6416 8690 36-7 Oyamacho, Shibuya Tokyo, Japan 151-0065

08-06-2021 | Leisure, Entertainment, Miscel …
Bleep Kids
Magician Brian Role` Announces Brand New Show
International magician and illusionist, Brian Role` has announced a brand new show, 'The Magical Wonder Show' starting this month. The Magical Wonder Show is a live spectacle of magic full of surprise and magic especially for children of all ages. During the show, four magical characters, all played by the Malta award-winning magician, Brian Role`, will amaze the audience with different themed magic and illusion acts all based
06-10-2021 | Business, Economy, Finances, B …
ATEQ
ATEQ Welcomes New Quality Technician, Brian Hartkopf
Livonia, MI - June 10, 2021 – ATEQ Corp. welcomes Brian Hartkopf as a new Quality Technician in its Industrial Division. Hartkopf will be responsible for quality-related tasks such as quality control inspections, instrument adjustments & calibrations and collaborating with the production team. Hartkopf has past experience working in the Aviation Field and Electromagnetic Compatibility field living in Arizona, Michigan and traveling to other regions in the world. When he's not at
07-31-2017 | Media & Telecommunications
Wizard World
Wizard World Names Brian Walton Director Of Content
Wizard World, Inc. (OTCBB: WIZD) today announces the appointment of Brian Walton to lead the company's cross-platform editorial efforts as Director of Content. Walton, who formerly served as editor-in-chief of Nerdist.com and VP of Editorial Operations at Legendary Digital Networks, will be responsible for bringing Wizard World’s voice to its global fan community via digital, video, print and live activations. “From our social content to our conventions, we
01-05-2011 | Politics, Law & Society
Brian Andrew Tully, Esq.
BRIAN ANDREW TULLY JOINS ACADEMY OF SPECIAL NEEDS PLANNERS
Huntington, NY — Attorney Brian Andrew Tully, Esq. has announced that he has joined the Academy of Special Needs Planners. Among the many challenges facing parents of special-needs children is planning for the time when the parents will no longer be around to act as the primary caregivers. The Academy of Special Needs Planners assists attorneys in providing the highest quality service and advice to individuals with special needs and
11-16-2009 | Arts & Culture
Agora Gallery
Brian Reed Creates Psychological Color Games in Metamorphosis
Chelsea’s Agora Gallery will feature New York artist, Brian Reed, in Metamorphosis. The exhibition is scheduled to run from November 20, 2009 through December 11, 2009 (opening reception: Thursday, December 3, 2009). New York-based artist, Brian Reed’s work moves between extremes that share a psychedelic color palette and kinetic sense of movement and energy. Always working from those visual constants, Reed experiments with traditional, region-specific aesthetic styles, like the torturous,
06-08-2009 | Politics, Law & Society
Kane Russell Coleman & Logan PC
Brian Fisher Joins Kane Russell Coleman & Logan
DALLAS/HOUSTON, Texas – Kane Russell Coleman & Logan is pleased to announce the addition of a new attorney. Brian J. Fisher joined KRCL as an associate on May 6, 2009, and practices in the litigation section of the Dallas office. His scope of practice involves personal injury claims, premises liability, products liability, auto and trucking liability, and commercial and business disputes. Mr. Fisher is a 2001 graduate
Comments about openPR
Your portal is fast, simple, and easy to use. Others may have more functions but they also demand more editing time, you have to preformat the text in order to achieve a good result etc. I think openPR is really fantastic!
Andreas Knepper, wallmedien AG