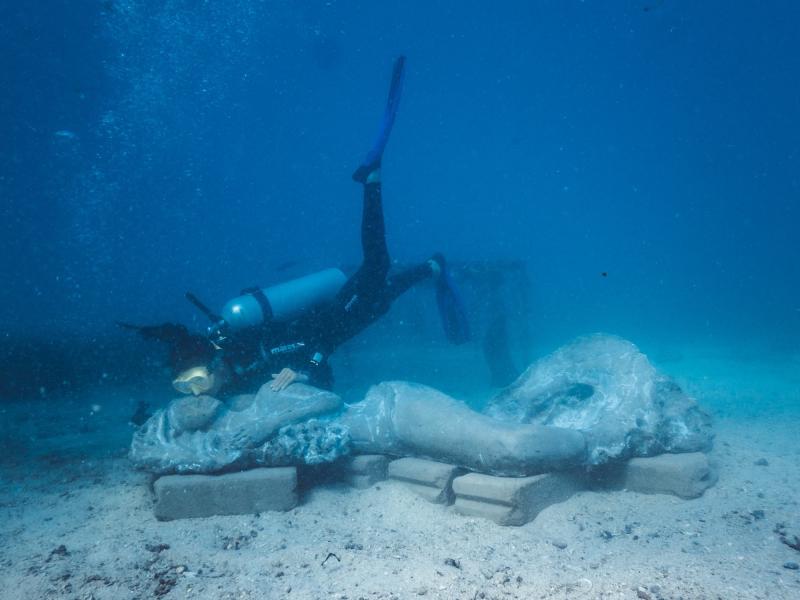 You're not imagining things: That really is a mermaid basking beneath the waters near Thanda Island in the Indian Ocean, Tanzania.

No, you’re not imagining things: That really is a mermaid basking beneath sun-brightened waters near Thanda Island off the Indian Ocean coast of Tanzania. It’s an artwork and a productive tool in the private island’s ongoing marine conservation work, which include growing and preserving the vulnerable coral reef that surrounds the island.Created by Antigone Meda, Island Manager and ‘Head of Magic’ at Thanda Island, the dreamy, bigger-than-life-size concrete sculpture contributes to an expanding artificial reef that is part of an underwater coral nursery located beneath the waves of the Shungimbili Island Marine Reserve about 5 minutes by boat from the resort. The piece is also the first of many mermaid sculptures that Meda intends to create to symbolize “the wonderful women that work on the Thanda Island team.” Made from environment-friendly concrete and cast on dry land in fiberglass molds, the sculpture is named “Rianne” for resident Marine Biologist Rianne Laan, who created the coral nursery in 2018.Meda, who joined Thanda Island in 2016 and became Island Manager two years later, drew inspiration for her sculpture from the underwater artwork of British artist Jason Taylor. She only works on mermaid sculptures at night after her work is over, she says, “so this one took about two years. It was worth it – this was a dream project.”Meanwhile, Laan’s marine conservation work around Thanda Island continues: She expects “Rianne,” who lies on her side supported by cinderblocks clutching corals beneath curling, shoulder-length hair, to be covered with newly grown corals in a few years. Guests of Thanda Island can see the progress and participate in various marine conservation initiatives on visits to the nursery, one of many waterborne activities available on the exclusive-use island.To learn more, visit: http://andreaschnoor.com/blog/art-marine-conservation-mermaid-sculpture-coral-nursery/Press contact: Andrea Schnoor Andrea Schnoor Communications 122 West 27th Street, Floor 10 New York, NY 10001 USA info@andreaschnoor.comThanda Island is located between the mainland of Tanzania and Mafia Island. It is 16 nautical miles or 18 miles east of the mainland of Tanzania, opposite Selous National Park and the Rufiji River Delta. The Island is accessible by boat from Mafia Island or helicopter directly from Dar es Salaam International Airport or from Kilondoni on Mafia Island. Thanda Island offers beautiful, warm, tropical weather. The rainy seasons comprise “long” rains in late April to May and “short” rains in November. Rain showers are mostly short, followed by sunshine, bringing a wonderful renewal and freshness to the environment. Thanda Island lies across the trade winds and experiences the northeast (Kaskazi) and southeast (Kusi) trade wind seasons. The Kaskazi usually starts at the end of November and lasts into February. The Kusi is from early July to mid-September. The neighboring Mafia Island is in a low-risk malaria area with no malaria having occurred on Thanda Island. The main currency is US Dollars.

10-13-2020 | Tourism, Cars, Traffic
Thanda Island
Thanda Island Offers Marine Encounters by Day & Night
**Newly reopened private island in the Indian Ocean tempts guests with nighttime activities ranging from snorkeling, reef walks and searching for bioluminescence with resident Marine Biologist** The day is far from over when the sun goes down at Thanda Island. Following cocktails and elaborate dinners served in the Villa, the private 20-acre island located 18 miles into the Indian Ocean off the coast of mainland Tanzania offers activities for guests to