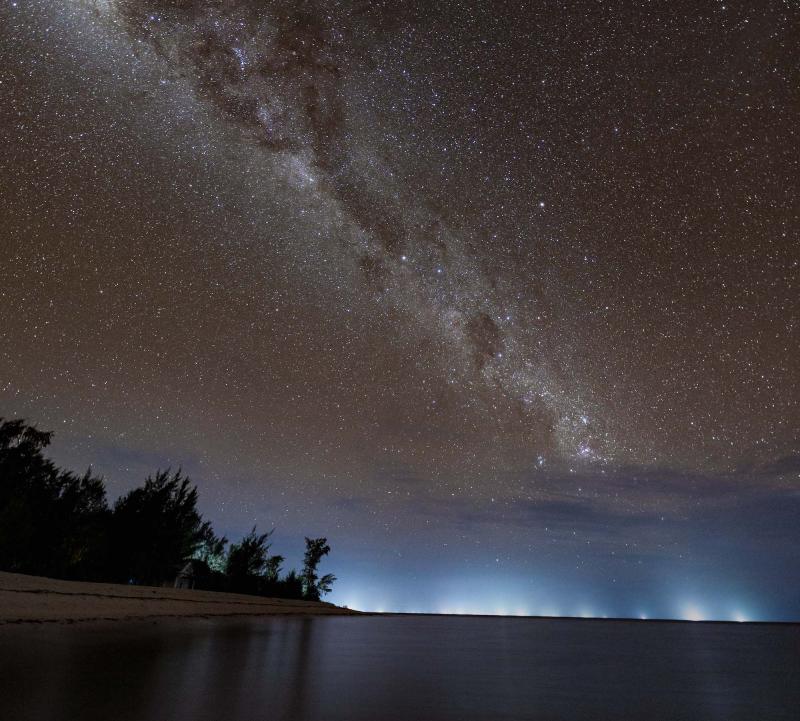 **Newly reopened private island in the Indian Ocean tempts guests with nighttime activities ranging from snorkeling, reef walks and searching for bioluminescence with resident Marine Biologist**The day is far from over when the sun goes down at Thanda Island. Following cocktails and elaborate dinners served in the Villa, the private 20-acre island located 18 miles into the Indian Ocean off the coast of mainland Tanzania offers activities for guests to enjoy deep into the evening: from night snorkeling to reef walks amid the fragile wonders of the Shungimbili Island Marine Reserve, as well as stargazing throughout the glorious heavens above. Resident Marine Biologist Rianne Laan leads nighttime programming for guests at Thanda Island. Activities generally start when it’s good and dark, about an hour or so after sunset. Guests of all ages are encouraged to participate she says: “We reserve night snorkeling for comfortable swimmers, but reef walks at low tide are open to everyone.”Bioluminescence is always a potential highlight, particularly during December and January when plankton is more prevalent and their glow can cause the surface of the ocean and reefs underneath to sparkle at night. Many other sea creatures are visible at night as well, including blacktip reef sharks, octopuses, squid, and sleeping parrotfish. “We are always careful not to wake parrotfish, as they have protective bubbles around them to protect themselves from predators,” says Laan. With water temperatures averaging just above 80° Fahrenheit year round at Thanda Island, there is no need for wet suits for either activity, though the resort has short neoprene suites available should guests prefer to wear them.While there is no telling what will appear beneath the ocean’s surface – “We get a lot of surprises,” says Laan – most nights offer clear views of the Milky Way lighting with no human-made light pollution to dampen the effect. “The stars and the moon make every evening special in their own way, time and again.” Exclusive use of Thanda Island is offered at US$25,000 per night for up to 18 guests. In addition to the 5 suite villa, the island also boasts two traditional double-story bandas (beach chalets) accommodating a further 8 guests. The rate includes the team of specialist island hosts, all island activities and watersport, pick-up from Mafia Island by boat, all meals and drinks including a handpicked selection of wines and champagnes, spa treatments, sandbank picnics, sunset cruises and local excursions. Five-night stays on Thanda Island include roundtrip transfers from Dar es Salaam by fixed winged charter via Mafia Island, the closest neighbor island. Direct to island helicopter transfers are quoted separately. For more information please contact T: +27 (0) 32 586 0149; E: reservations@thandaisland.comAndrea Schnoor Andrea Schnoor Communications 122 West 27th Street, Floor 10 New York, NY 10001 info@andreaschnoor.com www.andreaschnoor.comThanda Island is located between the mainland of Tanzania and Mafia Island. It is 16 nautical miles or 18 miles east of the mainland of Tanzania, opposite Selous National Park and the Rufiji River Delta. The Island is accessible by boat from Mafia Island or helicopter directly from Dar es Salaam International Airport. Scheduled flights from Dar es Salaam to Mafia Island take approximately 30 minutes. Boat transfers are approximately 30 minutes depending on weather and wind conditions. Helicopter flights from Dar es Salaam to Thanda Island take approximately 30 minutes. Thanda Island offers beautiful, warm, tropical weather. The rainy seasons comprise “long” rains in late April to May and “short” rains in November. Rain showers are mostly short, followed by sunshine, bringing a wonderful renewal and freshness to the environment. Thanda Island lies across the trade winds and experiences the northeast (Kaskazi) and southeast (Kusi) trade wind seasons. The Kaskazi usually starts at the end of November and lasts into February. The Kusi is from early July to mid-September. The Island does not have Malaria, although Mafia Island is in a low-risk malaria area. The main currency is US Dollars. Travel visa and information is available via www.immigration.go.tz

12-01-2017 | Leisure, Entertainment, Miscel …
Music Promotion Club
Boost your Party Mood with Mafia’s “Dancing Like My Diamonds”
Music is the coolest art form. It can make you cry, it can make you smile, and it can make you forget all the pains in life. Keeping music along the way you walk will mean a lot for yourself. Now, talking from that aspect, hip hop and rap has a whole different in a human’s life. Not only because it is the most popular genre worldwide, but because it
12-12-2016 | Arts & Culture
K-lee Starland
K-lee Starland, Author Of ‘The Audacious Ladies of La Gran Sorellanza’, Name …
K-lee Starland, PhD., author of ‘The Audacious Ladies of La Gran Sorellanza’, has been named as a finalist in the ’50 Great Writers You Should Be Reading’ Book Awards Contest. Starland was chosen from a field of hundreds of authors through a public voting process. ‘The Audacious Ladies of La Gran Sorellanza’ is the story of a group of mafia women who join together to rescue the girls their husbands
08-03-2011 | Leisure, Entertainment, Miscel …
Expat Records
London Breakbeat Producer ‘Mafia Kiss’ To Release New Single ‘What!’ On …
‘What!’ is the follow up to the critically acclaimed ‘Bump It’ which reached No. 1 on the ‘Track it Down’ breaks chart. Mafia Kiss is an up and coming breakbeat producer from London, UK, who began his musical path with an early fascination in house music. As various other styles of electronic music evolved, the signature Mafia Kiss sound was developed by fusing together breaks and electro and creating
12-23-2010 | Leisure, Entertainment, Miscel …
The Mafia Boss - Most Addicting Mafia Game
The Mafia Boss Launches New Beta Version and Tutorial Video
The Mafia Boss, an online multiplayer game that simulates the mafia underworld launches a new beta version and a video tutorial. Players will be able to preview the beta’s exciting new features and learn tips and tricks in the video. The Mafia Boss is the longest running online multiplayer mafia game. New York, NY (PRWEB) December 20, 2010 The Mafia Boss, an online multiplayer game that simulates the mafia underworld
06-08-2010 | Advertising, Media Consulting, …
The Mafia Boss - MMORPG Mafia Game
TheMafiaBoss.com, a Massive Multiplayer Free Mafia Game Online Celebrates 5th An …
TheMafiaBoss, a Massive Multiplayer Online Role Playing (MMORPG) Mafia Game celebrated its 5th anniversary on May 5, 2010. The game has maintained positive growth and remained popular over the past five years through consistent updates and feedback from players and despite the emergence of new mafia game titles TheMafiaBoss will remain the mother of all Mafia Games as discussed by the players themselves withing the game community. Bristol, WI (PRWEB)
08-10-2009 | IT, New Media & Software
G Data Software AG
Twitter, Facebook and co. find themselves targeted by the Cyber-Mafia
G Data Malware half-year report: Viruses and worms are once again setting the tills ringing ++ Bochum (Germany), 07th August 2009 – Social networking sites such as Facebook, StudiVZ or Twitter are enjoying increasing popularity. The growing visitor numbers and constant new offers ensure that cyber criminals are also taking note of these portals, causing them to be increasingly targeted by the black economy. Alongside social networks, Windows users will
Comments about openPR
Your portal is fast, simple, and easy to use. Others may have more functions but they also demand more editing time, you have to preformat the text in order to achieve a good result etc. I think openPR is really fantastic!
Andreas Knepper, wallmedien AG