Special Auction Side lines of the German Avant-garde - Going once, going twice and going for the 9th time 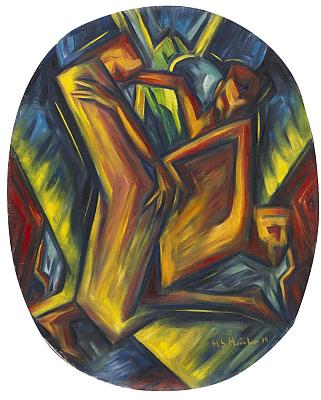 Munich, 12 September, 2012, (kk) – Off the beaten paths the biggest treasures can be discovered. The same can be said about the Special auction Sidelines of the German Avant-garde, which will take place in context of the auction of Modern Art on 19 th October for the ninth time.”After eight years of successful auctions of this kind, it is still my great concern to honor the works by forgotten artists, which were often lost in the chaos of war“, said Robert Ketterer. He continues: “The few works in existence today do not need to hide their light behind big names like Otto Dix, Ernst Ludwig Kirchner or August Macke. They must be put into the limelight to a greater extent and receive the deserved recognition.”With this concept Ketterer Kunst does not only offer a forum of its own for artists of Expressionism and New Objectivity whose œuvre was sharply depleted in the times of the Third Reich, another focus is to provide an impulse for the rediscovery of forgotten talents. Accordingly, the auction is predominantly geared at art lovers with an eye for quality and not only an ear for big names. The success of the concept has been proven by the great demand and the fact that this is going to be the ninth auction of this kind. The current special catalog comprises works made between 1900 and the late 1930s. The top lot is William Straube‘s oil painting “Tunis (Der rote Berg)“, which has been estimated at EUR 10.000-12.000. Next to this work, which marks the height of his fauvist-expressionist period, the artist, who was mentored by Henri Matisse, also captivates the audience with the expressive “Porträt Frau R. (Frau Reißner)“. Made around 1914 it will be called up with an estimate of EUR 6.000-8.000. Other works at the top of the wish list are two oil paintings by Hans Siebert von Heister (”Ekstatische Figuren“ and „Familie“), which will enter the race with estimates of EUR 7.000-8.000 and EUR 5.000-7.000 respectively. The wider focus is on works by artists such as Christian Arnold, Curt Ehrhardt, Alexander Gerbig, Fritz Gils, Otto Gleichmann, Walter Gramatté, Carl Christoph Hartig, Gretel Haas-Gerber, Franz Heckendorf, Manfred Henninger, Peter Herkenrath, Heinrich Heidner, Karl Otto Hy, Rudolf Jacobi, Leo Kahn, Ernst Klinger, Elfriede Lohse-Wächtler, Albert Müller, Wolf Röhricht, Rudolf Schlichter, Heinrich Schlief, Max Schwimmer, Gabriele Stock-Schmilinsky, Walter Strich-Chapel, Fritz Stuckenberg, Bruno Voigt, Fritz Schwarz-Waldegg, Emil Rudolf Weiss, Andreas Wilhelm and Richard Ziegler. The special auction will take place in context of the auction of Modern Art up to EUR 20.000. Hihghlights in this auction come from artist like Willi Baumeister, Erich Heckel, Karl Hofer, Adolf Hölzel, Gabriele Münter, Pablo Picasso, Pierre-Auguste Renoir and Oskar Schlemmer.Preview in Munich: 13 / 14 Oct. 11 a.m. – 5 p.m. 15 - 17 Oct. 10 a.m. – 6 p.m. 18 Oct. 10 a.m. – 3 p.m.Auction in Munich: 19 Oct., 1 p.m. Modern Art with special auction Side lines of the German Avant-gardeSince it was founded in 1954, Ketterer Kunst has been firmly established in the front ranks of auction houses dealing in fine art and rare books, with its headquarters in Munich and a branch in Hamburg. Gallery rooms in Berlin as well as representatives in Heidelberg, Düsseldorf and Modena (Italy) have contributed substantially to the company's success. In addition, exhibitions, special theme and charity auctions as well as online auctions are regular events at Ketterer Kunst. Robert Ketterer is auctioneer and owner of Ketterer Kunst.Contact:Ketterer Kunst Joseph-Wild-Str. 18 81829 München GERMANY Tel. +49-(0)55244-444 Fax.: +49-(0)55244-177 E-mail: infomuenchen@kettererkunst.deFor press inquiries:Michaela Derra M.A. Telefon: +49-(0)89-55244-152 (Fax: -177) E-Mail: m.derra@kettererkunst.de

You can edit or delete your press release Special Auction Side lines of the German Avant-garde - Going once, going twice and going for the 9th time here