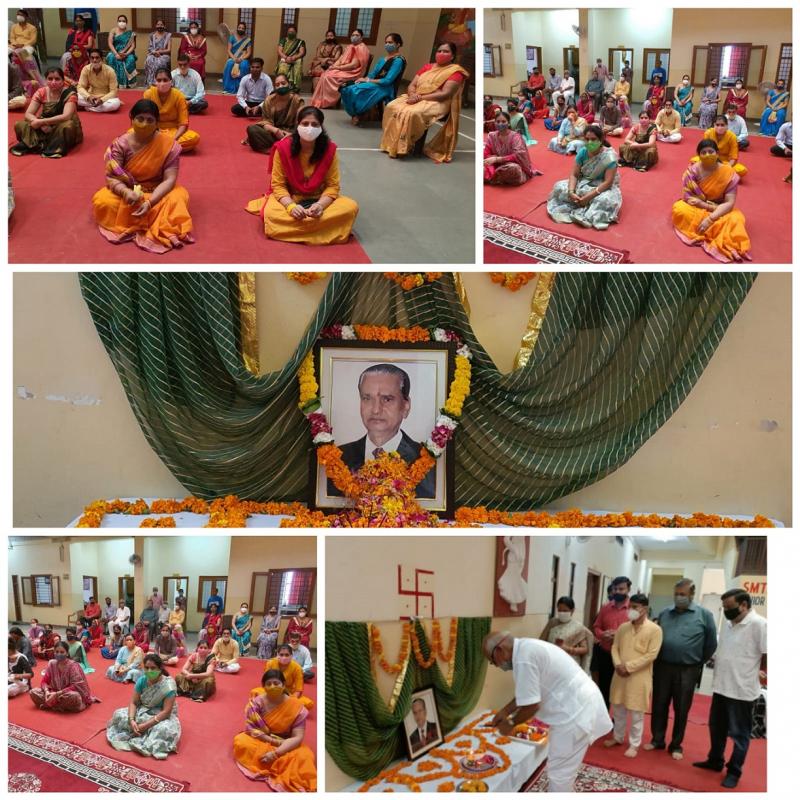 Smt. Jamuna Mishra Academy JMA established in the year 2004 popularly known as school with 100% results is presently one of the most sought after schools at Pilani considered as Oasis in the desert state of Rajasthan. It is a matter of great pride that alumni of JMA are presently pursuing higher education in various institutions which include Institution of Eminence BITS Pilani, NAAC A++ UGC Category-I Banasthali Vidyapith which has high ranking in both QS and in Times Higher Education 'THE' as Second Best Women's University in the world.By establishing JMA in his native place Pilani in fond memory of his beloved mother, founder Dr Brij Mohan Mishra built capacities for the spirit of inquiry, creativity and moral leadership among the students and became their role models. Born in Pilani to the well known Late Ram Niwasji Vaid of Pilani in 1941, Dr. BM Mishra inherited a legacy in which the creation of wealth and philanthropy was regarded as part of societal development. Spiritual strength and moral values were part of his personal credo.Dr BM Mishra did his schooling from the famous century old Birla School of Pilani and his graduation from erstwhile Birla Science college which later became deemed university Birla Institute of Technology and Science BITS Pilani both established by the legendary Padma Vibhushan Sri GD Birla. He then went to Jaipur to pursue his Medicine from SMS Medical College Jaipur. Then he pursued his higher education in Medicine from UK and then moved over to United States of America – USA.Dr BM Mishra’s contribution to education is no less than his contribution to the healthcare and hospitality sector. Known for his dignified unassuming personality, gleaming intellect, meticulous planning, deep regard for punctuality, gifted business acumen, and dynamic leadership, Dr. BM Mishra made an indelible mark in the field of education at Pilani. He breathed his last in the evening of Thursday, the 04th August, 2016 at Syracuse USA after a brief illness. The school management resolved to observe every year 04th August as Founders Day.On 04 August 2021, on account of COVID 19 pandemic a soul stirring Bhajan session was organized in the school which was attended by the Principal Mrs Booma Natarajan, teachers and staff. The program started with Ganesh Vandana followed by all time great song Jaise Suraj Ki Garmi Se Jalte Hue apart from Mahatma Gandhiji favorite Ram Dhun Raghupati Raghava Raja Ram, evergreen Payoji Maine Ram Ratan Dhan Payo and Hey Ram Hey Ram.Music teacher Mr Harish Parihar on Keyboard, and Mr Rishabh Kashiramka on congo and Hindi teacher Mr Mahendra Kumar on Dafli assisted the bhajan singers. The program concluded with offering of floral tributes to the founder Dr BM Mishra and distribution of Prasad. The students from their homes joined the program virtually by lighting and holding candles in respect of the founder. Everyone who attended the Bhajan session left with beaming faces and pride that they were indeed part of an institution which is a shining jewel in the crown among the schools at Pilani.For more details about JMA Pilani see http://www.jmapilani.org/Default.aspxMrs Booma Natarajan, M.Sc., M.A., B.Ed. Principal, Jamuna Mishra Academy – JMA Pilani Rajasthan 333031 India Phone 91-1596-242314 Email booma_pilani at yahoo.co.in Website: http://www.jmapilani.org/Default.aspx FaceBook: https://www.facebook.com/JMAPilaniRajasthanRank1/About JMA Pilani: Jamuna Mishra Academy - JMA Pilani is a Co-educational English Medium School with Experienced Teachers, Spacious Classrooms and Modern Amenities designed to impart Quality Education combined with All Round Personality Development and lay the Best Foundation for the Child’s Future. While the school admits both boys and girls, the girl student enrollment has been steadily rising every year and is presently nearly 50% of the total strength. Right from its inception, JMA Pilani has embarked on a rich tradition of celebrating various days of national and international significance and festivals which makes it a cut above the rest schools in Pilani. The school has for boys and girls Scout and NCC, girls’ band which has been winning laurels every year. NCC cadets of JMA Pilani have also been selected for participation in Republic Day Camp RDC and Shivaji Trail Trek. Yoga, Karate, Painting and Music are not just part of school routine but a way of life for the students. It is a matter of great pride that JMA Pilani is referred popularly as the School with 100% Results on account of outstanding results year after year in Board of Secondary Education Rajasthan RBSE Class X and Class 12.

03-22-2021 | IT, New Media & Software
DigitalAkki Inc.
Ankit Mishra Shares How his company helping small & Medium Business
Ankit Mishra, Founder Of i-Kart Pvt. Ltd. and DigitalAkki Inc. one of the leading IT, eCommerce, and Automation Company in India. Currently, Ankit Mishra and company is working with startups and small businesses in India, the US, and the UK and providing IT and technology support, so that every business can grow smoothly without spending much budget on their marketing and technology part. Here is how Ankit Mishra is Helping Small
03-22-2019 | Science & Education
PR 2019
Rishihood University appoints Kamlesh Mishra as is it new VC
Rishihood University appoints Kamlesh Mishra as is it new VC New Delhi: Kamlesh Misra joined Rishihood University as vice chancellor. The university is set up by an IIT graduate and philanthropists to focus on social impact in the areas like healthcare, entrepreneurship, education and creativity. The campus is in Sonipat, the upcoming education hub of Delhi NCR. Mr Kamlesh Misra was earlier the vice chancellor of Auro University in Surat and Ansal
12-29-2017 | Sports
Chanakya IAS Academy
Hazaribagh Youth Outshone at AK Mishra Foundation’s State Cross Country Champi …
The sound of cheerful motivation filled the air for participants, right after the red flag waved kicking off the State Cross Country Championship at Hazaribagh. The event was organized by AK Mishra Foundation in association with Hazaribagh Athletic Association at New Stadium, Hazaribagh on December 27th 2017. With 18 districts and over 500 participants, Hazaribagh youth marked glory for the district followed by participants from Ramgarh as runner-up winners. While
05-18-2017 | Science & Education
JMA Pilani Rajasthan
Jamuna Mishra Academy - JMA Top Ranking among Pilani Best Schools in India today
JMA which has been making rapid strides in early childhood education derives its inspiration from the quote “Information is just bits of data while knowledge is putting them together and wisdom is transcending them.” Matter of pride that in Board of Secondary Education Rajasthan RBSE 2017 Class XII, the very second Batch of Jamuna Mishra Academy - JMA Pilani has secured 100% Result among the schools of Pilani. Total Students: 18
09-19-2011 | Science & Education
JMA Pilani Rajasthan
Celebrations Galore at Jamuna Mishra Academy - JMA Pilani Rajasthan
Located in the heart of Shekhawati region of Rajasthan, Pilani is well known in India today for various top ranking educational institutions, CSIR Laboratory CEERI as well as the upcoming BrahMos Missile Assembly Project unit. Jamuna Mishra Academy – JMA established in the year 2004 which has been making rapid strides in early childhood education is presently one among the top ranking and most sought after schools at Pilani Rajasthan. JMA
08-18-2011 | Science & Education
JMA Pilani Rajasthan
Pilani Rajasthan Jamuna Mishra Academy - JMA Celebrates Grandparents Day
The grandparents may have silvery hair but their hearts always have been golden. One can say that a little bit of parent, a little bit of teacher, a little bit of best friend all rolled into one is the grandparent. It is essential that this generation of children in India today realize that Grandparents are indeed our heritage as well as essential members of our families and communities. Every child has
Comments about openPR
OpenPR ist the nicest and most clearly laid out PR platform I have seen to this day. The press releases are displayed very nicely and clearly and without any unnecessary frills. The updates are fast and the finished release looks appealing and is clearly legible. Even with 16 years of experience one discovers new things from time to time. Congratulations!
Gabriele Ketterl, Director Marketing & PR, Menads