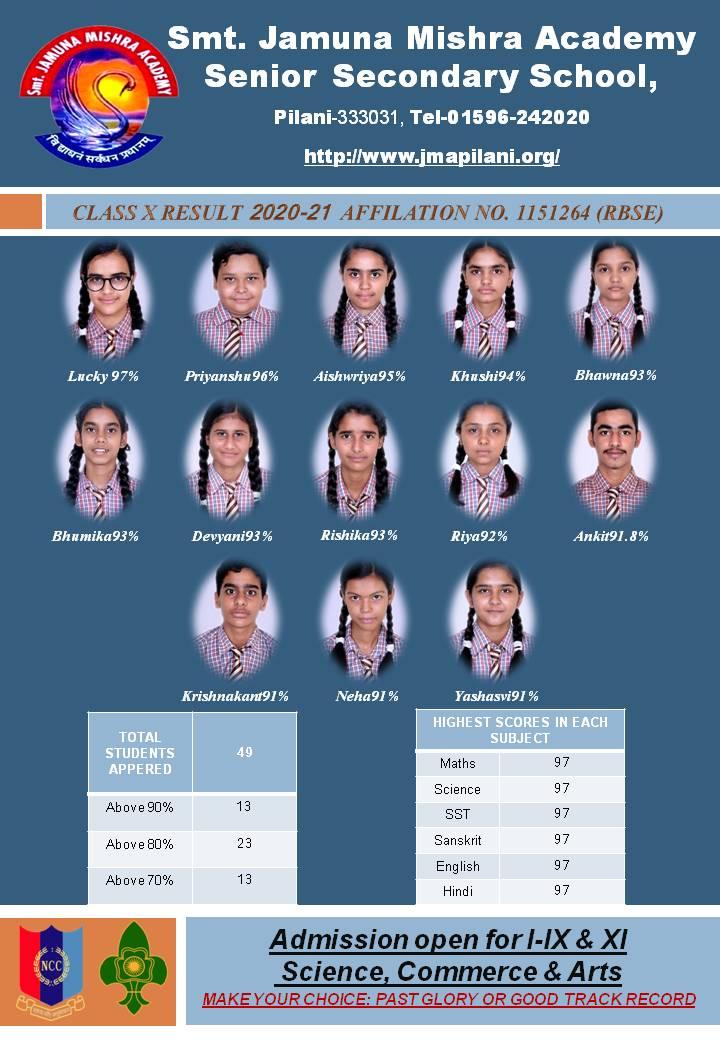 The school takes inspiration from the well known quote of Joseph Kennedy “When the Going gets tough, the tough get going”. Smt. Jamuna Mishra Academy (JMA) established in the year 2004 which has been making rapid strides in holistic education is presently one of the most sought after schools at Pilani considered as Oasis in the desert state of Rajasthan well known in India today for top ranking institutions like BITS Pilani, CSIR CEERI and globally renowned Birla Science Centre.It is a matter of great pride that alumni of JMA are presently pursuing higher education in various institutions which include NAAC A++ Banasthali Vidyapith which in Times Higher Education 'THE' has been ranked as Second Best Women's University in the world apart from coveted positions in QS Rankings. JMA Pilani has not only established a rich tradition of observing various days of international and national importance but also regularly invites experts both from India and abroad for giving lectures.Out of 49 students in Class X, 13 students scored above 90%, 23 students scored between 80-90% and rest 13 scored between 70-80%. The highest mark in each of the subjects namely Mathematics, Science, Social Studies, Sanskrit, English and Hindi was 97%. Hard working student Lucky bagged the top position with 97%. Other toppers include Priyanshu (96%), Aishwriya (95%), Khushi (94%), Bhawana (93%), Bhumika (93%), Devyani (93%), Rishika (93%), Riya (92%), Ankit (91.8%), Krishnakant (91%), Neha (91%), and Yashasvi (91%). Principal Mrs Booma Natarajan congratulated all the students for their stellar performances and wished them the very best in all their future endeavors. She advised them to utilize the Icha Shakti, Kriya Shakti and Gyan Shakti which is gift of God to become dreamers, performers achievers and bring glory to their Alma mater and nation at large. The students expressed their high degree of satisfaction to the school for making them tech savvy in pursuing their studies during the pandemic. She also expressed gratitude to all parents for extending their cooperation and praised the team of teachers and staff of school for their dedication to ensure that the highest standards were maintained at all times especially during the lockdowns and pandemic threat. Many parents expressed their wholehearted appreciation to Team JMA for using technology based education in the best possible manner during the most challenging era in the history of Indian education namely the COVID 19 affected 2020 – 2021 session.For more details about JMA Pilani see http://www.jmapilani.org/Default.aspxMrs Booma Natarajan, M.Sc., M.A., B.Ed. Principal, Jamuna Mishra Academy – JMA Near Old Pilani Post Office Pilani Rajasthan 333031 India Phone 91-1596-242314 Email booma_pilani at yahoo.co.in Website: http://www.jmapilani.org/Default.aspx FaceBook: https://www.facebook.com/JMAPilaniRajasthanRank1/About JMA Pilani: Jamuna Mishra Academy - JMA Pilani is a Co-educational English Medium School with Experienced Teachers, Spacious Classrooms and Modern Amenities designed to impart Quality Education combined with All Round Personality Development and lay the Best Foundation for the Child’s Future. While the school admits both boys and girls, the girl student enrollment has been steadily rising every year and is presently nearly 50% of the total strength. Right from its inception, JMA Pilani has embarked on a rich tradition of celebrating various days of national and international significance and festivals which makes it a cut above the rest schools in Pilani. The school has for boys and girls Scout and NCC, girls’ band which has been winning laurels every year. NCC cadets of JMA Pilani have also been selected for participation in Republic Day Camp RDC and Shivaji Trail Trek. Yoga, Karate, Painting and Music are not just part of school routine but a way of life for the students. It is a matter of great pride that JMA Pilani is referred popularly as the School with 100% Results on account of outstanding results year after year in Board of Secondary Education Rajasthan RBSE Class X and Class 12.

09-13-2018 | IT, New Media & Software
VoxMicro
The AIRETOS E95 Class
The VoxMicro Group is proud to present its AIRETOS® branded E95 Class modules; a reliable, long-lifespan family of wireless adapters that transform the entire Qualcomm-Atheros QCA95xx/AR95xx series of client chipsets into a full portfolio of modular solutions. The E95 Class comprises a total of 14 base models. The AIRETOS® E95 Class supports high-end wireless link configurations that can use a full range of enterprise level protocol features, like CCX and FIPS-loopback
03-21-2016 | Business, Economy, Finances, B …
Take My Online Class
Take My Online Class Offers 100% Guaranteed Class-Help Services
New York, NY March 18, 2016 - America’s best online class help experts not only promise to complete all course related assignments on time, but also help to negotiate the lowest rate possible. Take My Online Class offers academic assistance service through their OCPs or Online Class Provider. “When you hire one of our OCPs for class-help, we hold your payments in escrow until you are happy with the service provided.
01-29-2013 | Science & Education
@WashULaw Washington University School of Law
@WashULaw Welcomes Inaugural Class
The inaugural class of foreign attorneys in Washington University School of Law’s new online Master of Laws (LLM) in U.S. Law Program, @WashULaw, represents seven countries and a variety of professional backgrounds. The 10 attorneys are benefiting from the program’s cutting-edge, web-based format, which allows them to earn their degree from a prestigious world-class research institution without relocating to the United States. The online students hail from Brazil, China, India,
10-04-2010 | Health & Medicine
Gravitational Systems Engineering, inc.
New energy class industrial pump announced
For Immediate Release: 9/20/2010 : GSE announces R-SBP100 Clean energy 100 GPM Traffic powered "Bump Pump" :No Fuel Required US based GSE, Gravitational Systems Engineering, announces a rugged traffic powered pump, which can be easily deployed and requires no fuel. The R-SBP100 is an entry level product designed for use by road construction crews. The 100 GPM capacity and the rugged construction, from recycled tires, make this unit
06-04-2008 | Fashion, Lifestyle, Trends
Drettmann GmbH
Mega: Drettmann reaches the 50 m class
Following its successful launch of the PREMIER 130’ at the beginning of the year, DRETTMANN GmbH has now commissioned the construction of its first 50 meter yacht. Yacht architect and Florida resident JC ESPINOSA will be responsible for the design. The new flagship will be equipped with 2,680 HP Caterpillar motors (optionally, MTU engines are also possible) for maximum speeds of 20 knots. On three decks, a total of ten
01-05-2007 | IT, New Media & Software
WOWGAO INC
The EPC Class Structure
Toronto, ON, July, 2006 - The EPC Tag Class Structure is often misunderstood. 'Class' is not the same as 'Generation'. Class describes a tags basic functionality for example whether it has memory or a battery. Generation refers to a tag specification's major release or ver-sion number. The full name for what is popularly called EPC Generation 2 is actually EPC Class 1 Generation 2, indicating that the specification refers to
Comments about openPR
Your portal is fast, simple, and easy to use. Others may have more functions but they also demand more editing time, you have to preformat the text in order to achieve a good result etc. I think openPR is really fantastic!
Andreas Knepper, wallmedien AG