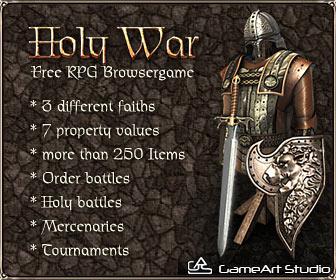 Berliner web game developers and publishers GameArt Studio have announced today that from 1st September 2012, there will be a recruitment contest in their internationally-acclaimed, medieval-themed web game, Holy War. Even though work on the world merge in Holy War only began a few days ago, it is already in full flow. What's more, this development also brings with it an exciting new feature for all players of the browser game: the recruitment of new players is no longer restricted to your own game world, but instead players can now be recruited to whichever world they wish. By way of celebration, GameArt Studio has called for a recruitment contest, which will run throughout September. The aim of GameArt Studio's latest competition is to recruit the most new players to Holy War in one particular language. Anyone and everyone has the chance to participate and win some great prizes. Among other things, the lucky winners will be rewarded with months of Premium status and battle healing to boot. Exactly what players stand to win and the competition rules can be found on the Holy War forum. There you will also find professional tips from the support team, so if you haven't done so already - sign up for the forum now! Registration is not only free but also very easy to do. The GameArt Studio team would like to wish you all the best and much success in the contest!GameArt Studio GmbH was founded in 2006 in Berlin and rapidly grew to become one of the most innovative developers and producers of so-called web games. Web games are computer games through which real players can play with and against each other over the internet. They can be played for free on any internet browser, with no software installation or downloads required. With their four games „Holy War“, „Tagoria“, „A.I. War“ und „Glory Wars“, GameArt Studio already entertain over 5 million players worldwide.GameArt Studio GmbH Bismarckstraße 107 10625 Berlin, Germany E-Mail: press_en@gameartstudio.de Internet: www.gameartstudio.de