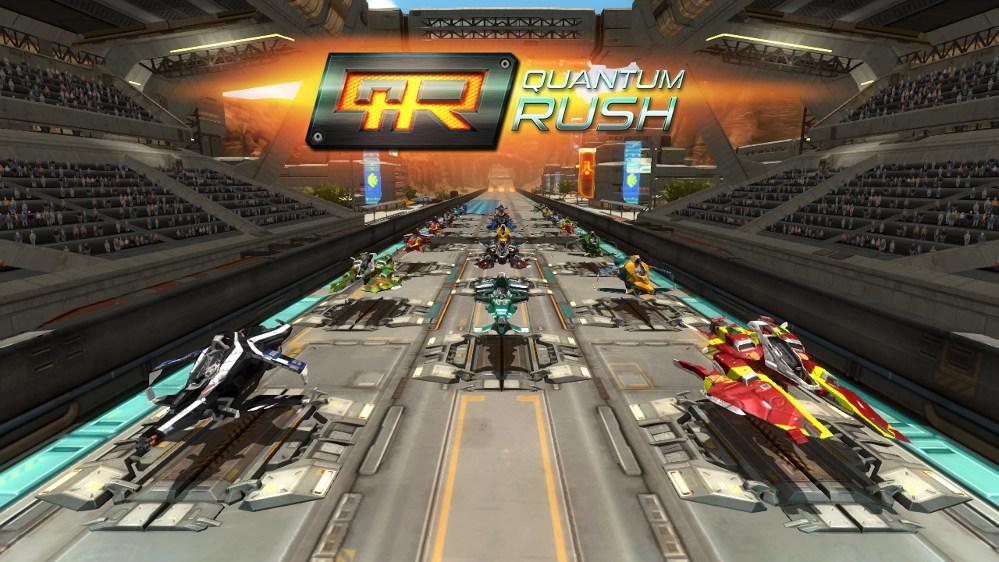 The developer team of online racer Quantum Rush, which is currently in the open beta phase and has fans all across the world, considers a single player version of the game. Now the community has to decide – the team is asking for feedback on this idea!The reason for these thoughts are the current lag problems. Although the next patches will bring optimizations and improvements, the main reason will remain: All the game servers are located in Germany. This leads to lags in the online multiplayer races, especially if the players are from different continents.The developers considered multiple solutions: It would be possible to build servers in different countries and continents, to improve the racing experience for players from far away countries. It also possible to develop a stand-alone single player version and transfer the game concept into an offline version.Now all fans and players of Quantum Rush can join the discussion and give their thoughts on the different ideas. A new area (http://forum.quantum-rush.net/wbb/index.php?page=Board&boardID=19) for the discussion was already opened in the official Quantum Rush forum.The developers are in close contact with the community and implement many requested features. Next on the list are an ingame tutorial and easier controls. These will be implemented with the next patches.The Quantum Rush team is dedicated to constantly improve and optimize the game and is getting closer to reviving the future racer genre day by day.If you want to try out the game you can register for free on the Quantum Rush homepage and download the client. You can also support the developers on Steam Greenlight.GameArt Studio was founded in Berlin, 2006, and quickly became one of the most innovative developers and publishers of online games.All GameArt Studio games are multiplayer online games that allow players from all around the world to play together. Furthermore, all GameArt Studio games are free-to-play.The four published games of GameArt Studio "Holy War", "Tagoria", "A.I. War" and "Glory Wars" are enjoyed by a worldwide community.GameArt Studio GmbH Bismarckstraße 107 10625 Berlin, Germany E-Mail: press_en@gameartstudio.de Internet: www.gameartstudio.de

You can edit or delete your press release Online racer Quantum Rush soon as a single player version? here

02-10-2014 | IT, New Media & Software
GameArt Studio GmbH
4th international world opened in medieval browsergame Holy War
Today a brand new international world opened in the medieval browsergame Holy War. This is the first new world since the big battle update and the introduction of the battle fatigue in December. The big December update had a rocky start – but everything is smoothed out again and all the new features can now be used to their full potential! The city battles allow every order to conquer the cities on
08-26-2013 | IT, New Media & Software
GameArt Studio GmbH
New international world in Tagoria & recruiting contest
A short while ago Tagoria, the popular fantasy browsergame of Berlin based online game developer GameArt Studio, celebrated its 5th birthday with a dimension battle weekend. Now it opens a new world and stages a big recruiting contest! It will be the third international world in Tagoria. International means that every player can freely choose between 11 languages and even change his selection at anytime during play. Of course this applies to
05-22-2013 | IT, New Media & Software
GameArt Studio GmbH
Holy War - The players have decided
The players have decided: No new regulation for battle declarations in medieval browser game Holy War! The result of a survey started in April among the players of worldwide-known medieval browser game Holy War is in: Surprisingly the community voted against a regulation that intended to restrict the activities of so-called blocking orders. 65% of the players voted against the regulation and the comment section also showed clearly that the majority of
05-22-2013 | IT, New Media & Software
GameArt Studio GmbH
Big recruiting contest for the successful start of the first goldworld in fantas …
Berlin based online games developer GameArt Studio announced that today the auctions started on the new goldworld in Glory Wars. To celebrate the successful start of the goldworld and the auctions there will be a big recruiting contest that runs until the end of June! Last week the first so-called goldworld went online in the worldwide known fantasy browser game Glory Wars. The new goldworld is bustling with thousands of players from