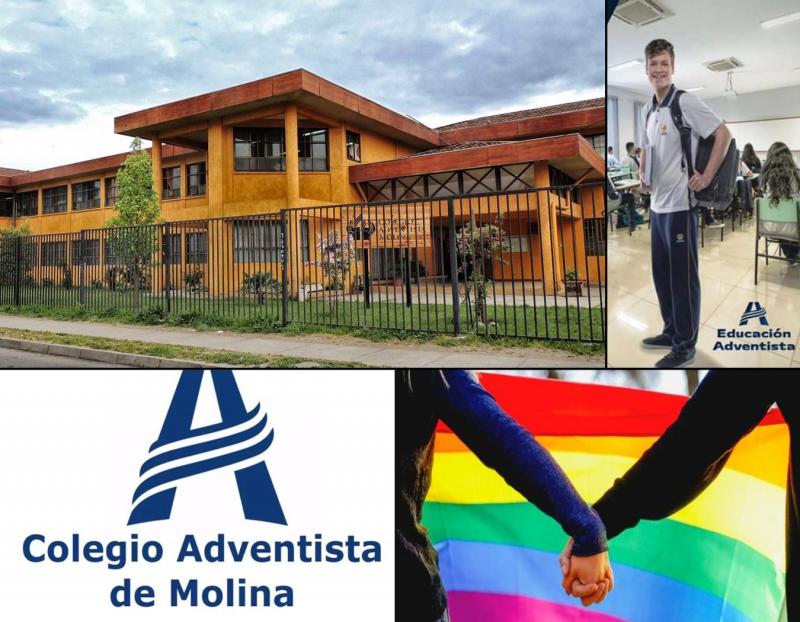 Social justice is not biblical justice. The modern movement for social justice and equity is turning our youth into a wild rebellious group of radical ideologues. The goal of these modern social justice warriors is to deconstruct, overthrow, tear apart and burn down the pillars and landmarks of our faith. Sadly, too many churches and Seventh-day Adventists have joined the revolution.On April 15, 2021, students at the Colegio Adventista de Molina located in Maule, Chile, denounced their own school for expressing “discrimination” and “hatred” against the LGBT+ community. The students also refused to continue taking a mandatory religious course on biblical sexuality. The students contacted the Movement for Homosexual Integration and Liberation (Movilh), an LGBT+ rights organization, and a complaint has now been filed with “the Superintendent of Education, Cristián O’Ryan, so that he could investigate the complaint made by the students and punish those responsible.” [1] [2] The Adventist institution was accused of teaching its students “hate” through a required course that included the following statements about sex:“God created a healthy human sexuality, and homosexuality was never intended to exist. He never wanted any result of sin to be present in our life. But, since sin and temptation are realities in today’s world, we must choose to live pure and holy lives despite the temptations that come our way.” [3] “The Bible considers homosexuality unacceptable for a Christian, although tendencies and inclinations are not sinful. However, we are all responsible for what we do with our tendencies and inclinations. From the biblical perspective it does not really matter how we arrive at a condition, tendency or inclination, but how we act when faced with it, be it alcoholism, homosexuality, drug addiction and lewd thoughts.” [3] The LGBT+ activist group, Movihl, wrote a letter to the Seventh-day Adventist academy telling them that their views about homosexuality had no relationship with “the Bible, with religion, and even less with legislation, since they openly violate the Zamudio Law, the Law on School Violence and the Law of Educational Inclusion.” [3] Whenever our youth begins reporting our church schools to the authorities for simply teaching the Bible, know for sure that the following words will soon come to pass: “And the brother shall deliver up the brother to death, and the father the child: and the children shall rise up against their parents, and cause them to be put to death.” Matthew 10:21.This is the Marxist movement for social justice on full display in all its glory. These students are displaying the same rebellion that we have been observing for many years in Adventism. This student rebellion in Chile is just an extension of the resistance that we see in different divisions, unions and conferences around the world. There is an open insurrection against the clear teaching of God’s word. We are dealing with people who simply refuse to believe and obey the plain words of Scripture. And this defiance will only continue to grow as long as we have modern deconstructionists trying to erode or rewrite God’s law.“Divisions will come in the church. Two parties will be developed” (Selected Messages, Vol. 2, p. 114).“The history of the rebellion of (Korah) Dathan and Abiram is being repeated, and will be repeated till the close of time. Who will be on the Lord’s side? Who will be deceived, and in their turn become deceivers?” (Letter 15, 1892).“God will arouse His people; if other means fail, heresies will come in among them, which will sift them, separating the chaff from the wheat. The Lord calls upon all who believe His word to awake out of sleep” (Testimonies, Vol. 5, p. 707).Modern liberal progressives have a worldview that allows them to choose which parts of Scripture they want to interpret literally and which parts they believe should be understood in the context of contemporary culture and science. This is why we have modern insubordinates in Adventism openly pushing for feminism, LGBT+ inclusion and new prophetic interpretations for these last days. And they will continue to do so despite openly challenging our long-standing teachings of the faith.These open acts of hostility against God that took place at the Colegio Adventista de Molina are causing great confusion today; and when we sow confusion, we will reap confusion. This is exactly what we are reaping now. All those who oppose our historic teachings and choose to sow seeds of doubt must clearly know on which side they are on:“Satan is stealthily working to confuse the minds of those who know the truth by bringing in misleading sentiments and misleading examples. Unless they repent and are converted, those who are living divided lives, professedly serving the Lord but at the same time scheming to carry out their own plans—plans which retard the very work which Christ gave His life to accomplish—will be deceived by the enemy of souls” (Letter 248, 1907).Join the conversation and share your thoughts with us below at the bottom of this page. We have opened the comments for you to tell us what you think.Sources [1] https://www.msn.com/es-pe/noticias/peru/chile-estudiantes-denuncian-material-homof%C3%B3bico-en-colegio-adventista/ar-BB1fJIcY[2] https://www.elmostrador.cl/braga/2021/04/16/estudiantes-denuncian-libro-de-religion-que-senala-a-la-homosexualidad-como-una-enfermedad-y-un-pecado/[3] https://www.movilh.cl/estudiantes-del-colegio-adventista-de-molina-denuncia-uso-de-texto-que-vinculo-a-la-homosexualidad-con-la-drogadiccion-y-pensamientos-lascivos/About: Advent Messenger provides news and commentary on current events, top stories, social trends and political and religious events. For more news visit www.adventmessenger.orgContact: Andy Roman, Publisher Address: Advent Messenger, PO Box 96, Dover, OK 73734 Phone: (888) 299-2119 Website: www.adventmessenger.org Email: adventmessengers@gmail.com

05-19-2021 | Leisure, Entertainment, Miscel …
Advent Messenger
The Seventh-day Adventist Church in Spain has Fully Committed Itself to Laudato …
The Spanish Union of Churches Conference is the headquarters of the Seventh-day Adventist Church in Spain. Its official news magazine is called Revista Adventsita España. Esther Azón, co-editor of Revista Adventista España, recently wrote a short article and provided a link to a 102-page report revealing that Seventh-day Adventist institutions within her union have been participating in government sponsored, ecumenical, climate change initiatives. These initiatives are promoting and implementing the
01-26-2021 | Leisure, Entertainment, Miscel …
Advent Messenger
Adventist Health Allows its Physicians to Perform ‘Gender Transition’ Servic …
Adventist Health allows its physicians to perform gender affirming surgeries such as mastectomies and hysterectomies for transgender men (women transitioning into men) at its facilities. Also, “within” the Adventist Health “system,” physicians can provide gender-affirming hormone therapy. This information was disclosed by the California State Attorney General’s Office. All of this came to light as a result of Adventist Health’s plan to take over Delano Regional Medical Center in 2019. Because
12-11-2020 | Leisure, Entertainment, Miscel …
Advent Messenger
Another Adventist Institution Just Received Funding from Abortion Money
Seventh-day Adventist institutions have a long history of receiving money from the abortion business. Different news reports have revealed that institutions such as Loma Linda University and La Sierra University have received funding from abortionist, Dr. Edward C. Allred. [1] Dr. Allred has claimed to have personally performed more than 250,000 abortions. At one point, his abortion clinics performed 1/3 of all abortions in California and generated tens of millions
09-05-2020 | Leisure, Entertainment, Miscel …
Advent Messenger
Stop the Roman Catholic Indoctrination of our Seventh-day Adventist Youth in Eur …
The Taize Pilgrimages are annual ecumenical gatherings created for young people. About 20,000 young people attend each of the Taize Pilgrimages organized by the Roman Catholic Monk, Brother Alois. Their non-doctrinal unity of brotherhood is in line with the Vatican’s agenda on ecumenism. Pope Francis loves this religious order. Prayers, chanting, singing and sentimentality form the perfect faith without creeds where everyone can unite. Francesco Mosca is the Seventh-day Adventist
08-26-2020 | Leisure, Entertainment, Miscel …
Advent Messenger
An Independent Seventh-day Adventist Media Ministry is Being Censored for its Co …
Conservative groups and opinions are being targeted on social media platforms. Big tech companies such as Google, Facebook and Twitter are censoring people for expressing socially conservative views or for sharing content that does not contain a certain politically correct tone. Tyrannical governments are now in bed with tyrannical media giants. The goal is to control the information. A small group of people want to determine what is and what isn’t
03-26-2020 | Leisure, Entertainment, Miscel …
Advent Messenger
While Pope Francis Venerates Mother Earth, Adventist Health wants You to Connect …
Pope Francis is attributing the current global crisis to man's damage to the environment. On Sunday, March 22, 2020, Pope Francis did an online interview with the journalist Jordi Evolve. The Pope was asked about the condition of our planet and if the current global crisis was nature's judgment upon humanity. In a recent video the Pope responded by venerating nature with his pantheistic philosophies: "There's a saying that you surely
Comments about openPR
Your portal is fast, simple, and easy to use. Others may have more functions but they also demand more editing time, you have to preformat the text in order to achieve a good result etc. I think openPR is really fantastic!
Andreas Knepper, wallmedien AG