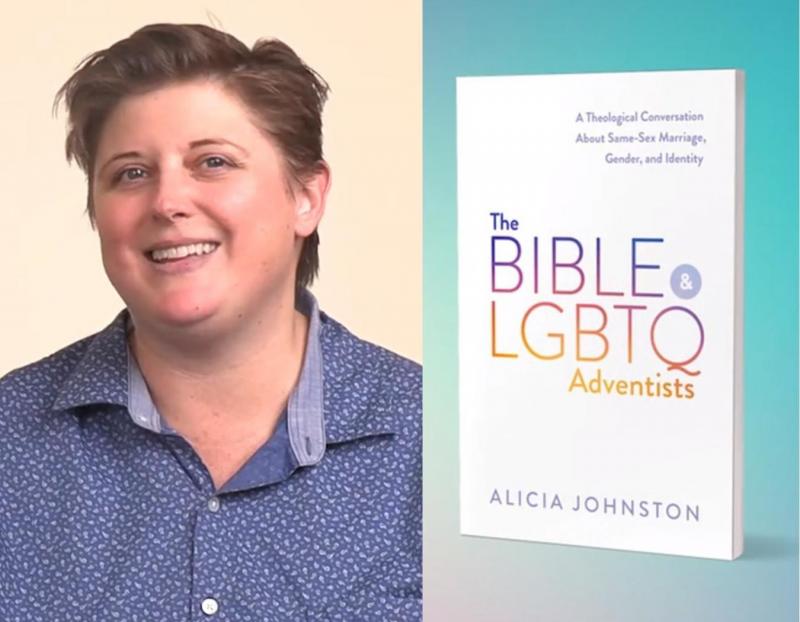 Alicia Johnston is a former pastor from the Arizona Conference of Seventh-day Adventists. She resigned from the ministry after coming out as a member of the LGBT+ community. She has now published a new book called “The Bible & LGBTQ Adventists” which, according to her, “challenges the prevailing SDA beliefs.” Alicia Johnston calls for “full affirmation of same-sex marriage and transgender identity.” She says that it is NOT “biblical to oppose same-sex marriage or transgender identity” and that Seventh-day Adventists have “gotten this question completely wrong.” What is most concerning about this is that this new LGBT+ affirming theology book has the support of former and current pastors and church administrators. There is a section on Alicia Johnston’s page that lists current Adventist ministers who “endorse” her book. The following names are listed on the fundraising page for the new book “The Bible & LGBTQ Adventists” as those who endorse her views:• Reinder Bruinsma, retired Adventist pastor and administrator in the Netherlands, scholar, and author • John McClarty, Adventist Pastor at Green Lake Church • Chris Blake, Pastor, San Luis Obispo and Morro Bay Seventh-day Adventist Churches • Stephen Chavez, Adventist pastor and long-time Assistant Editor for Adventist Review and Adventist World • Anonymous Adventist Pastor in the Atlantic Union • Anonymous Adventist Pastor in the Southern Union • Anonymous Adventist Pastor in Pacific UnionThen we have Pastor Kevin McGill who is the pastor of the Troy Seventh-day Adventist in Troy, ID. Pastor Kevin is not only promoting Alicia Johnston’s book, but he is also directing people to Alicia Johnston’s fundraising page. He also says he met Alicia while studying at an “Adventist Seminary” in “Berrien Springs Michigan.”Here we have unbelieving pastors who are paid with sacred tithe money supporting the full inclusion and equal status of LGBT+ people with full rights to ministry, ordination and leadership positions. This is an effort to detach ourselves from truth and righteousness towards pure secularism and worldliness. We are witnessing in Adventism the heretical denial of the will of God for men, women and marriage, as revealed by God at creation. This development shows how low God’s doctrinal and moral standards have fallen in many places within the church. Instead of leaving the movement, as Alicia Johnston did, these apostate pastors stay to impose their heresy while undermining the clear teachings of God’s word. Click to read the full story: http://adventmessenger.org/a-new-book-on-full-lgbt-equality-is-receiving-the-praises-from-many-seventh-day-adventist-pastors/Contact: Andy Roman, Publisher Address: Advent Messenger, PO Box 96, Dover, OK 73734 Phone: (888) 299-2119 Website: www.adventmessenger.org Email: adventmessengers@gmail.comAbout: Advent Messenger provides news and commentary on current events, top stories, social trends and political and religious events. For more news visit www.adventmessenger.org

05-19-2021 | Leisure, Entertainment, Miscel …
Advent Messenger
The Seventh-day Adventist Church in Spain has Fully Committed Itself to Laudato …
The Spanish Union of Churches Conference is the headquarters of the Seventh-day Adventist Church in Spain. Its official news magazine is called Revista Adventsita España. Esther Azón, co-editor of Revista Adventista España, recently wrote a short article and provided a link to a 102-page report revealing that Seventh-day Adventist institutions within her union have been participating in government sponsored, ecumenical, climate change initiatives. These initiatives are promoting and implementing the
01-26-2021 | Leisure, Entertainment, Miscel …
Advent Messenger
Adventist Health Allows its Physicians to Perform ‘Gender Transition’ Servic …
Adventist Health allows its physicians to perform gender affirming surgeries such as mastectomies and hysterectomies for transgender men (women transitioning into men) at its facilities. Also, “within” the Adventist Health “system,” physicians can provide gender-affirming hormone therapy. This information was disclosed by the California State Attorney General’s Office. All of this came to light as a result of Adventist Health’s plan to take over Delano Regional Medical Center in 2019. Because
12-11-2020 | Leisure, Entertainment, Miscel …
Advent Messenger
Another Adventist Institution Just Received Funding from Abortion Money
Seventh-day Adventist institutions have a long history of receiving money from the abortion business. Different news reports have revealed that institutions such as Loma Linda University and La Sierra University have received funding from abortionist, Dr. Edward C. Allred. [1] Dr. Allred has claimed to have personally performed more than 250,000 abortions. At one point, his abortion clinics performed 1/3 of all abortions in California and generated tens of millions
09-05-2020 | Leisure, Entertainment, Miscel …
Advent Messenger
Stop the Roman Catholic Indoctrination of our Seventh-day Adventist Youth in Eur …
The Taize Pilgrimages are annual ecumenical gatherings created for young people. About 20,000 young people attend each of the Taize Pilgrimages organized by the Roman Catholic Monk, Brother Alois. Their non-doctrinal unity of brotherhood is in line with the Vatican’s agenda on ecumenism. Pope Francis loves this religious order. Prayers, chanting, singing and sentimentality form the perfect faith without creeds where everyone can unite. Francesco Mosca is the Seventh-day Adventist
08-26-2020 | Leisure, Entertainment, Miscel …
Advent Messenger
An Independent Seventh-day Adventist Media Ministry is Being Censored for its Co …
Conservative groups and opinions are being targeted on social media platforms. Big tech companies such as Google, Facebook and Twitter are censoring people for expressing socially conservative views or for sharing content that does not contain a certain politically correct tone. Tyrannical governments are now in bed with tyrannical media giants. The goal is to control the information. A small group of people want to determine what is and what isn’t
03-26-2020 | Leisure, Entertainment, Miscel …
Advent Messenger
While Pope Francis Venerates Mother Earth, Adventist Health wants You to Connect …
Pope Francis is attributing the current global crisis to man's damage to the environment. On Sunday, March 22, 2020, Pope Francis did an online interview with the journalist Jordi Evolve. The Pope was asked about the condition of our planet and if the current global crisis was nature's judgment upon humanity. In a recent video the Pope responded by venerating nature with his pantheistic philosophies: "There's a saying that you surely
Comments about openPR
9 o'clock: discuss press release with client, 10 o'clock: submit release to openPR, within the briefest possible time release is published and displayed in a prominent place on openPR.de. I am thrilled!
Zehra Spindler, Calypso Now! - Communication Agency