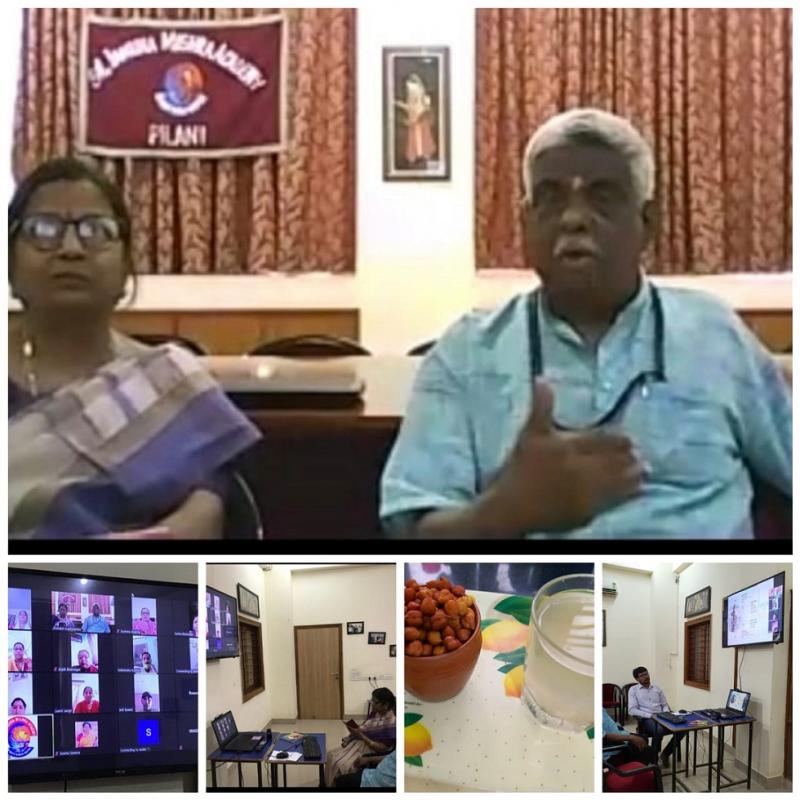 Smt. Jamuna Mishra Academy JMA established in the year 2004 is presently one of the most sought after schools at Pilani considered as Oasis in the desert state of Rajasthan. It is a matter of great pride that alumni of JMA are presently pursuing higher education in various institutions which include NAAC A++ and UGC Category-I, Banasthali Vidyapith which in Times Higher Education 'THE' is Second Best Women's University in global rankings as well as Institution of Eminence BITS Pilani. JMA Pilani has not only established a rich tradition of observing various days and festivals of international as well as national importance but also invite experts from top ranking institutions for conducting Faculty Development Programmes – FDP on a regular basis. COVID-19 has undoubtedly thrown a spanner into such activities in many institutions but the zeal to carry out them is unstoppable. Due to pandemic and lockdowns, keeping the working from home teachers engaged for self development activities has become a serious challenge for many educational institutions in India today with a few exceptions such as JMA Pilani.Recognizing the universal appeal of Yoga, on 11 December 2014, the United Nations – UN proclaimed 21 June as the International Day of Yoga. The four well known paths of yoga are Karma Yoga – Path of Action, Bhakti Yoga – Path of Devotion or Passion, Jnana Yoga – Path of Knowledge or Philosophical Path and Raja Yoga - Path of Wisdom or Scientific Path. For a teacher all the four paths are integrated as the karma yoga of teaching with passion implying Bhakti Yoga to transfer knowledge implying Jnana Yoga to students incorporating Scientific methods implying Raja Yoga leading to wisdom.The Fundamental Soft skills set for becoming a successful teacher includes empathy, negotiation, public speaking, relationship building, leadership, time management and communication. The Essential Soft skills set for becoming a successful teacher include conflict management, stress management, creativity, persuasion, collaboration, adaptability and last but not the least emotional intelligence.On 21 June 2021, JMA Pilani organized a webinar titled Karma Yoga for becoming a successful teacher under Faculty Development Program - FDP. The expert invited for delivering the same was well known alumnus holding not one or two but four degrees of BITS Pilani BR Natarajan with four decades of teaching experience who is presently Professor and Head of Chemical Engineering Department at Banasthali Vidyapith Rajasthan. Principal Mrs Booma Natarajan introduced the speaker to the audience and started the proceedings with a virtual refreshment session of soaked Chana and nimbu pani as the teachers had joined immediately after a Hatha Yoga session doing various asanas. Prof Natarajan in his talk highlighted the top ten qualities of a successful teacher and gave insight into how a successful teacher looks like apart from sharing the secrets of being a successful teacher. He concluded his lecture by discussing the fundamental soft skills set and essential soft skills set for becoming a successful teacher.It goes without saying that this webinar of Prof Natarajan on Karma Yoga for becoming a Successful teacher has become talk of not only Pilani town but the entire Shekhawati region of Rajasthan. Rishabh Kashiramka from JMA Pilani provided the technical support for conducting the zoom session and also ensured that all teacher participants received E Certificates for same.For more details about JMA Pilani see http://www.jmapilani.org/Default.aspxMrs Booma Natarajan, M.Sc., M.A., B.Ed. Principal, Jamuna Mishra Academy – JMA Near Icha Purthi Hanuman Mandir Pilani Rajasthan 333031 India Phone 91-1596-242314 Email booma_pilani at yahoo.co.in Website: http://www.jmapilani.org/Default.aspx FaceBook: https://www.facebook.com/JMAPilaniRajasthanRank1/About JMA Pilani: Jamuna Mishra Academy - JMA Pilani is a Co-educational English Medium School with Experienced Teachers, Spacious Classrooms and Modern Amenities designed to impart Quality Education combined with All Round Personality Development and lay the Best Foundation for the Child’s Future. While the school admits both boys and girls, the girl student enrollment has been steadily rising every year and is presently nearly 50% of the total strength. Right from its inception, JMA Pilani has embarked on a rich tradition of celebrating various days of national and international significance and festivals which makes it a cut above the rest schools in Pilani. The school has for boys and girls Scout and NCC, girls’ band which has been winning laurels every year. NCC cadets of JMA Pilani have also been selected for participation in Republic Day Camp RDC and Shivaji Trail Trek. Yoga, Karate, Painting and Music are not just part of school routine but a way of life for the students. It is a matter of great pride that JMA Pilani is referred popularly as the School with 100% Results on account of outstanding results year after year in Board of Secondary Education Rajasthan RBSE Class X and Class 12.

06-28-2018 | Business, Economy, Finances, B …
Apex Market Reports
Global Yoga Mat Market 2018 - Yogabum, Aerolite, Aurorae, Barefoot Yoga
Apex Market Reports, recently published a detailed market research study focused on the “Yoga Mat Market” across the global, regional and country level. The report provides 360° analysis of “Yoga Mat Market” from view of manufacturers, regions, product types and end industries. The research report analyses and provides the historical data along with current performance of the global PP Pipe industry, and estimates the future trend of Yoga Mat on
11-15-2017 | Health & Medicine
Yoga Nebula
Yoga Nebula Announces Yoga Event in Collaboration with OriginHathaYoga.com
Yoga event aims to highlight Yogic practices and attract new followers 13th November: On December 9th and 10th this year, New Jersey will host a yoga event organized by Yoga Nebula in collaboration with OriginHathaYoga.com. Yoga Nebula, a New York-based yoga facility will host the event. Yoga Nebula was founded by Samir Lal, who underwent extensive teacher training in Isha Yoga at the Isha Foundation in Coimbatore, India. The teachers
06-23-2017 | Leisure, Entertainment, Miscel …
Music Promotion Club
“Urban Yoga” by Marqesa is an Influencing Yoga Track
On the yoga day, the enthusiasts of yoga have been in for a pleasant surprise as Marqesa releases her new track – “Urban Yoga”. It is a new age track that aides in meditation and offers relaxation to those who listens to it. This song has the power and potential to change one’s perspectives and lives with profound music. The song creates a hypnotic environment with superbly relaxing music. Marqesa the
05-11-2017 | Tourism, Cars, Traffic
Yoga Retreat Guide
Yoga Retreats & Holidays
Come and visit the yoga retreat guide and find the yoga retreat that you have been waiting for. We offer a complete guide to the types of you styles that are around today. You can rest assured that you will find the right one for you. We have many different options for you to advertise your yoga retreat for a onetime fee that will ensure that you put your yoga retreat
02-20-2017 | Health & Medicine
Santhi Yoga
Yoga Teacher Training
Santhi Yoga Teacher Training Institute, a Registered Yoga school with Yoga Alliance offers 200 Hour Yoga Teacher Training, 300 Hour Yoga Teacher Training and Childrens Yoga Teacher Training Courses in Kerala, India. The main objective behind the foundation of this institute is to propagate the knowledge of yoga to people and make them benefitted by its techniques. Santhi Yoga's 200 hour Yoga Teacher Training, 300 Hour Yoga Teacher Training and
07-26-2016 | Health & Medicine
Win Vision Eye Hospitals
Can yoga worsen glaucoma?
Patients with glaucoma are encouraged to exercise and lead healthy and active lifestyle, but should avoid activities that increase the eye pressure and damage the optic nerve. Push-ups and heavy weight lifting are not advisable, so is certain yoga postures in which the head is facing downward. Previous studies have investigated only headstand position which showed a remarkable two-fold increase in eye pressure. However, a new research carried out at
Comments about openPR
I can't but agree to the positive statements about your portal: easy to use, clear layout, very good search function, and quick editing!
Jens O'Brien, Borgmeier Media Communication