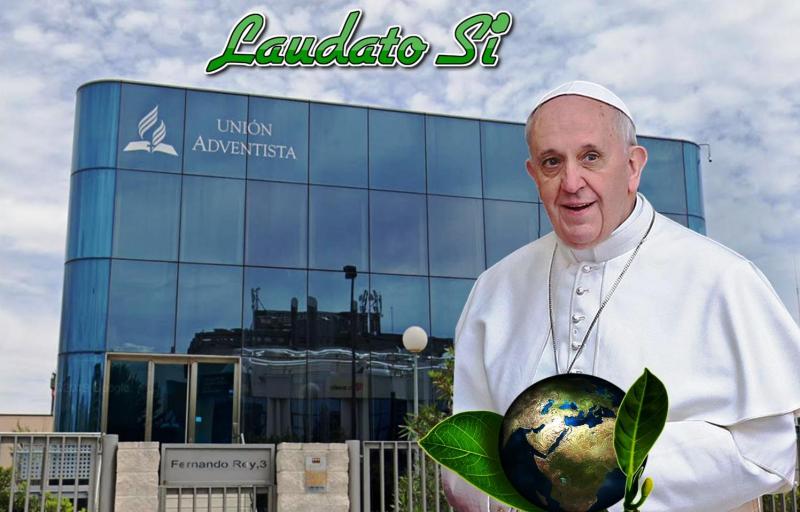 The Spanish Union of Churches Conference is the headquarters of the Seventh-day Adventist Church in Spain. Its official news magazine is called Revista Adventsita España. Esther Azón, co-editor of Revista Adventista España, recently wrote a short article and provided a link to a 102-page report revealing that Seventh-day Adventist institutions within her union have been participating in government sponsored, ecumenical, climate change initiatives. These initiatives are promoting and implementing the policies of Pope Francis contained in his encyclical Laudato Si ‘.The name of the government-sponsored climate change initiative is called the “Interreligious Guide to Good Practices in Climate Culture.” It promotes ecumenism, environmentalism, spiritualism, pantheism, Eucharistic celebrations and even calls for a “Sabbath for the Planet.” The Seventh-day Adventist Union Conference in Spain has made this pro-Laudato Si’ guide on climate change (102 pages) available to all Seventh-day Adventists through its official news website. Seventh-day Adventist institutions are IN THIS REPORT along with all the different religions, including Catholics and Jesuits.We are being robbed of our faith! Rome is taking our churches, our schools and our children (see photo of Adventist kids dressed as wild animals in nature). In Spain and elsewhere, we no longer have unions, conferences and churches anymore. Thanks to Rome they are being transformed into NGOs (United Nations Non-Governmental Organizations). We are witnessing the total subjugation of a Seventh-day Adventist Union Conference to the ecological ideology of Rome that is anti-Adventist at its core. The Alpha of Apostasy has returned. The Omega is unfolding before our eyes as Seventh-day Adventist entities, one by one, are being stripped of their historic Adventist faith. In this report, Seventh-day Adventists appear on pages 70, 71 and the Society of Jesus (the Jesuits) appear on page 72, side by side. How convenient. Is this just a coincidence? And to make matters worse, the Union Conference in Spain is sharing this entire climate report on church owned platforms so that other Seventh-day Adventist churches can get inspired and get involved! They present this report as a good thing.We are seeing the papacy promoting a “Sabbath for the planet” for both the state and the churches. What Sabbath are they talking about? Well, what day does Pope Francis call “Sabbath” in Laudato Si’? Sunday worship! How can Seventh-day Adventists participate in an “Interreligious Guide to Good Practices in Climate Culture” that is bought and paid for by the state? This is church and state coming together to advance Sunday sacredness.Are we not shocked to see how the leadership has become totally subservient to Rome’s climate agenda? Are we not shocked to see a Union Conference announcing the need for ecological conversion alongside those calling for a “Sunday-Sabbath for the planet?” Is it a small thing to see Adventists listed alongside Jesuits in a document that is replete with calls to embrace Laudato Si’? Read Ezekiel 8:16, 17.It is necessary for someone to make a point-by-point refutation regarding these developments in Spain: Laudato Si’ and the proposed Sunday-Sabbath for the planet. Who is going to do it? Will the Inter-European Division, the parent organization, do it? Will the General Conference do it? Will someone at our universities make one? If we don’t, then the world will see us as “dishonest.” This is what inspiration says:“Let it be understood that Seventh-day Adventists can make no compromise. In your opinions and faith there must not be the least appearance of wavering; the world has a right to know what to expect of us, and will look upon us as dishonest, as hiding our real sentiments and principles out of policy, if we carry even the semblance of being uncommitted till the popular voice has pointed out the safe way. The Comforter, the Holy Spirit, which Christ said He would send into the world, was to bear an unwavering testimony.” (Councils to Writers and Editors, p. 95).So what does God think about all this talk and emphasis by the churches, governments, schools, advocacy groups, globalists – and the whole world, concerning the saving of the environment, sustainability and fostering a relationship with nature and the earth? God calls it idolatry; pure and simple:“Nature is not God, nor was it ever God … Those who have not a knowledge of God through an acceptance of the revelation He has made of Himself in Christ, will obtain only an imperfect knowledge of Him in nature; and this knowledge, so far from bringing the whole being into conformity to His will, will make men idolaters. Professing themselves to be wise, they will become fools. Those who think they can obtain a knowledge of God aside from His Representative, whom the Word declares is “the express image of his person,” will need to become fools in their own estimation before they can be wise. It is impossible to gain a perfect knowledge of God from nature alone; for nature itself is imperfect.” (Bible Commentary, vol. 6, p. 1068.)Welcome to the Omega of Apostasy and to modern-day idolatry. The central messages of Revelation 14:6-12 have been replaced by an ecological crusading mission. We are now fully committed to saving the environment, ensuring sustainable development, generating sustainable economic growth, establishing sustainable population control, abortion (part of UN Sustainable Development Goals) and all the other faithless myths that Rome has prepared for us and the world.CLICK TO READ THIS SHOCKING REPORT: http://adventmessenger.org/the-seventh-day-adventist-church-in-spain-has-fully-committed-itself-to-laudato-si/Contact: Andy Roman, Publisher Address: Advent Messenger, PO Box 96, Dover, OK 73734 Phone: (888) 299-2119 Website: www.adventmessenger.org Email: adventmessengers@gmail.comAbout: Advent Messenger provides news and commentary on current events, top stories, social trends and political and religious events. For more news visit www.adventmessenger.org

01-26-2021 | Leisure, Entertainment, Miscel …
Advent Messenger
Adventist Health Allows its Physicians to Perform ‘Gender Transition’ Servic …
Adventist Health allows its physicians to perform gender affirming surgeries such as mastectomies and hysterectomies for transgender men (women transitioning into men) at its facilities. Also, “within” the Adventist Health “system,” physicians can provide gender-affirming hormone therapy. This information was disclosed by the California State Attorney General’s Office. All of this came to light as a result of Adventist Health’s plan to take over Delano Regional Medical Center in 2019. Because
12-11-2020 | Leisure, Entertainment, Miscel …
Advent Messenger
Another Adventist Institution Just Received Funding from Abortion Money
Seventh-day Adventist institutions have a long history of receiving money from the abortion business. Different news reports have revealed that institutions such as Loma Linda University and La Sierra University have received funding from abortionist, Dr. Edward C. Allred. [1] Dr. Allred has claimed to have personally performed more than 250,000 abortions. At one point, his abortion clinics performed 1/3 of all abortions in California and generated tens of millions
09-05-2020 | Leisure, Entertainment, Miscel …
Advent Messenger
Stop the Roman Catholic Indoctrination of our Seventh-day Adventist Youth in Eur …
The Taize Pilgrimages are annual ecumenical gatherings created for young people. About 20,000 young people attend each of the Taize Pilgrimages organized by the Roman Catholic Monk, Brother Alois. Their non-doctrinal unity of brotherhood is in line with the Vatican’s agenda on ecumenism. Pope Francis loves this religious order. Prayers, chanting, singing and sentimentality form the perfect faith without creeds where everyone can unite. Francesco Mosca is the Seventh-day Adventist
08-26-2020 | Leisure, Entertainment, Miscel …
Advent Messenger
An Independent Seventh-day Adventist Media Ministry is Being Censored for its Co …
Conservative groups and opinions are being targeted on social media platforms. Big tech companies such as Google, Facebook and Twitter are censoring people for expressing socially conservative views or for sharing content that does not contain a certain politically correct tone. Tyrannical governments are now in bed with tyrannical media giants. The goal is to control the information. A small group of people want to determine what is and what isn’t
03-26-2020 | Leisure, Entertainment, Miscel …
Advent Messenger
While Pope Francis Venerates Mother Earth, Adventist Health wants You to Connect …
Pope Francis is attributing the current global crisis to man's damage to the environment. On Sunday, March 22, 2020, Pope Francis did an online interview with the journalist Jordi Evolve. The Pope was asked about the condition of our planet and if the current global crisis was nature's judgment upon humanity. In a recent video the Pope responded by venerating nature with his pantheistic philosophies: "There's a saying that you surely
04-27-2017 | Health & Medicine
Bio-Optronics
Adventist Health System, Bio-Optronics Partner on CTMS Deployment to Foster Clin …
April 27, 2017 – ROCHESTER, NY – Bio-Optronics and Adventist Health System (AHS) today announced the implementation and initial rollout of the Clinical Conductor Clinical Trial Management System (CTMS) at two of the faith-based health care system’s research institutes. This deployment, which included a CTMS-EMR integration with Cerner Millennium, will maximize process efficiency and enhance the organization’s overall research quality. A national leader in patient care, this implementation enables AHS
Comments about openPR
We publish our press releases on openPR.de because we like people who are "open" - just like us.
Frank Obels, CEO, INCONET - Informationssysteme, Communication und Netzwerkberatung GmbH