Pope Francis: We still have Time to Begin Transforming Our Global Economy 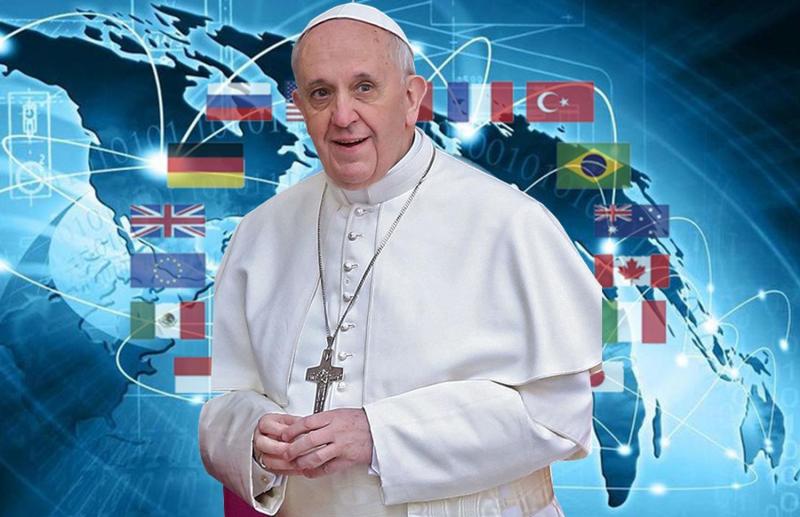 Bible prophecy describes in the book of Revelation 17 that a power would exert significant political influence over the people of the earth. These predictions can only be applied to one actor in modern history. The city of seven hills (Revelation 17:9) is none other than Rome. God’s prophetic word reveals what this woman or “church” will do in the days to come:“For all nations have drunk of the wine of the wrath of her fornication, and the kings of the earth have committed fornication with her, and the merchants of the earth are waxed rich through the abundance of her delicacies.” Revelation 18:3.The phrase “merchants of the earth” describes a global economic business model that Rome would attempt to create. Bible prophecy predicted thousands of years ago that someone in the last days would unite the nations in order to control their economies. Pope Francis is arguably the most popular and influential leader in the world today, and he is radically trying to eliminate our free market capital systems by transforming our global economy into a socialist model.On May 4, 2021, Pope Francis renewed his call to create a new modern economy because our current structure “is in crisis” and our “financial markets have never been as inflated as they are now.” In a video [1] the Pope calls the current economic markets “unsustainable” and “dangerous.” He is calling for a “global change” and a different kind of economy that is more “inclusive and sustainable” and that will care for “our common home.” In the video, he says that “we still have time” to make these changes.The Pope’s call for a fair and inclusive global financial system was made through his Worldwide Prayer Network. This is a network run by the Vatican that encourages Roman Catholics to pray for the universal mission of the church. It also serves as a communication platform to mobilize Catholics into action. This month, the Pope is not asking the entire church to pray for personal holiness, evangelism, or that the gospel can be preached in all the world; no, but he is praying for left-wing political activism and for a new financial economy because of the pandemic. He is also challenging world leaders to “regulate” their trade markets to achieve the desired results.Pope Francis is seeking to shake things up dramatically as a politician, not a pastor. He says that the Covid-19 crisis and the effects it has brought is proof that the current free market systems must end. Many powerful globalists are using the pandemic to transform the global economy. It was these same globalists who shut down the global economy in the first place. First they closed businesses, stopped travel, ended trade, ordered lock-downs, closed churches, enforced social distancing, implemented mask mandates and tanked our economy. Now they tell us that it is time to turn everything into a socialist system. Is this just a co-incidence?Globalists from the World Economic Forum, the United Nations and the Biden administration are seeking help and guidance from Pope Francis to lead the world into the future. Tragically, great calamities, natural disasters, pandemics, plagues, war and political strife will not stop because they are the result of transgression of God’s moral law. It is sin and lawlessness that is creating confusion and disorder. And a union of church and state to promote an immoral and secular solution is not the answer. That will only bring about more trouble and unrest. May these signs taking place today be a wake-up call, alerting us that the end is upon us and of the need to turn to Christ for the forgiveness of our sins:“I was shown that a terrible condition of things exists in our world. The angel of mercy is folding her wings, ready to depart. Already the Lord’s restraining power is being withdrawn from the earth, and Satan is seeking to stir up the various elements in the religious world, leading men to place themselves under the training of the great deceiver, who work with all deceivableness of unrighteousness in the children of disobedience. Already the inhabitants of the earth are marshaling under the leading of the prince of darkness, and this is but the beginning of the end. The law of God is made void. We see and hear of confusion and perplexity, want and famine, earthquakes and floods; terrible outrages will be committed by men; passion, not reason, bears sway. The wrath of God is upon the inhabitants of the world, who are fast becoming as corrupt as were the inhabitants of S@dom and Gomorrah. Already fire and flood are destroying thousands of lives and the property that has been selfishly accumulated by the oppression of the poor. The Lord is soon to cut short His work and put an end to sin” (Testimonies, Vol. 8, p. 49).Sources[1] https://youtu.be/ZdjWdPdM0ewContact: Andy Roman, Publisher Address: Advent Messenger, PO Box 96, Dover, OK 73734 Phone: (888) 299-2119 Website: www.adventmessenger.org Email: adventmessengers@gmail.comAbout: Advent Messenger provides news and commentary on current events, top stories, social trends and political and religious events. For more news visit www.adventmessenger.org

You can edit or delete your press release Pope Francis: We still have Time to Begin Transforming Our Global Economy here

11-21-2020 | Leisure, Entertainment, Miscel …
Advent Messenger
Fratelli Tutti: Ganoune Diop Praises Pope Francis’ Encyclical
The pope is working overtime to unite all of the religious faiths of the world into one family. Pagans, spiritualists, Mother Earth worshippers, homosexuals, Protestants, Catholics, indigenous faiths and eastern religions are all part of Rome’s one-world brotherhood. Truth and doctrine no longer matter anymore according to the Pope’s encyclical, Fratelli Tutti. Just yesterday, Roman Catholics, Evangelicals, Orthodox and Seventh-day Adventists gathered to praise Fratelli Tutti. Over thirty religious leaders
02-22-2019 | Arts & Culture
Wiedmann Media AG
Pope Francis receives unique Bible translation from Germany
Rome / Stuttgart. Faith can move mountains. In this case, the saying goes even beyond death. At the general audience, in the audience hall Paul VI in Rome, Pope Francis received the number ONE of the limited Wiedmann Bible ART edition on February 20th. The original is worldwide unique. It is a visual narrative of the Bible depicting the Old and New Testament in 3,333 illustrations. A printed copy of
09-13-2012 | Health & Medicine
Altitude Marketing
CGIRB promotes Dawn Pope to Chief Operating Officer
September 6, 2012 – Research Triangle Park, N.C. – Copernicus Group IRB (CGIRB), a leading independent institutional review board, today announced the promotion of Dawn Pope to Chief Operating Officer. In her new position, Ms. Pope will provide leadership and direction for the overall operations of the company, planning and coordinating the development of strategic objectives and goals. Ms. Pope came to CGIRB from Clinical Trials Support Services, Inc., in 1998.
04-28-2011 | Politics, Law & Society
Androvett Legal Media
Texas Center for Legal Ethics Names 2011 Pope Awards Recipients
AUSTIN – The Texas Center for Legal Ethics is pleased to announce this year’s winners of the Chief Justice Jack Pope Awards: Federal Judge Will Garwood and Austin attorney William Hilgers. The Pope Awards are given each year to one judge and one lawyer who epitomize the highest standards of professionalism and integrity. The awards honor one of the founders of the Texas Center for Legal Ethics, former Chief
02-02-2011 | Science & Education
EsoGuru
UFO Investigator Nick Pope discusses the Real X Files
The event Nick Pope will begin the lecture by giving an overview of the British government’s involvement with the UFO phenomenon, which dates back to 1950, when the Ministry of Defense established a small committee to examine the phenomenon, known as the Flying Saucer Working Party. He will explain government policy on this issue and detail the way in which investigations were carried out. Nick Pope will then discuss a number of cases
09-26-2006 | Politics, Law & Society
Imperato-Brooks 2008
Vatican News: Papal Knight Speaks on Pope Benedict XVI and Religious Freedom
Los Angeles – September 24, 2006 - Today Papal Knight and 2008 US Presidential Candidate Daniel Imperato spoke out regarding the recent statements of Pope Benedict XVI and religious freedom. “I call on the world today, particularly the Christians and the Muslims, to realize that our Pope Benedict XVI has made a mistake in addressing the issue of Prophet Muhammad during his trip to his hometown Regensburg, Germany.
Comments about openPR
OpenPR ist the nicest and most clearly laid out PR platform I have seen to this day. The press releases are displayed very nicely and clearly and without any unnecessary frills. The updates are fast and the finished release looks appealing and is clearly legible. Even with 16 years of experience one discovers new things from time to time. Congratulations!
Gabriele Ketterl, Director Marketing & PR, Menads