Top 10 Ranking: A Turning Point for the Polysilicon Industry 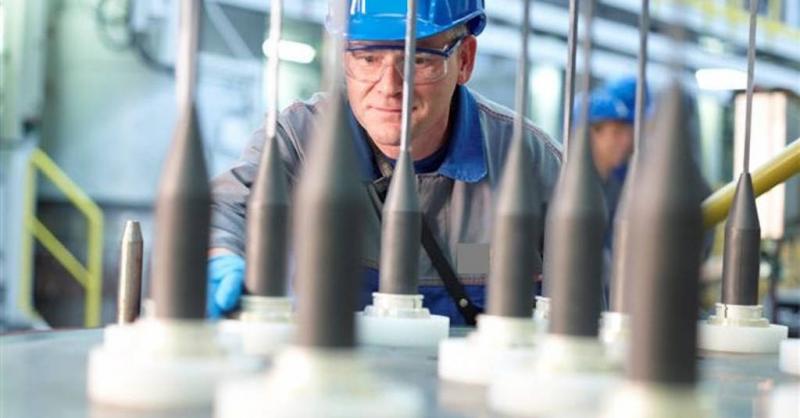 The era of western polysilicon manufacturers at the world’s top is drawing to a close – Image: Silicon Products Group

Bernreuter Research: Top four manufacturers will all be Chinese in 2022Würzburg (Germany) – The world’s four largest polysilicon manufacturers in 2022 will all be based in China, predicts Bernreuter Research. The polysilicon industry expert has published its latest ranking of the top ten producers on its website today: https://www.bernreuter.com/polysilicon/manufacturers/Germany-based Wacker Chemie, which became the global number one after opening its third polysilicon plant in the U.S. state of Tennessee in 2016, lost its top position to Tongwei in 2020. The Chinese high flyer was still number nine in 2016 before it started an ambitious expansion program. With three production locations in Sichuan province, Inner Mongolia and Yunnan province, Tongwei will reach a total capacity of nearly 200,000 metric tons (MT) by the end of this year and likely 300,000 MT in 2023.According to the production estimates of Bernreuter Research, Wacker slid to the second rank in 2020, closely followed by China-based Daqo New Energy, which ousted OCI from the third place. After shutting down its solar-grade polysilicon operations in South Korea last year, OCI dropped to number seven in the ranking.Wacker is still the world’s largest manufacturer of electronic-grade polysilicon for the semiconductor industry and is aiming to gain further market share in this smaller segment. In contrast to its rapidly expanding Chinese competitors, however, the quality leader has no intention to increase its solar-grade capacity beyond continuous debottlenecking. "We are certainly not interested in building incredible, new capacities," said CEO Rudolf Staudigl in the conference call about his company’s first-quarter results on April 30.Consequently, Wacker will be overtaken by three more Chinese manufacturers and fall back to number five in 2022, predicts Bernreuter Research. "The rise of China-based players in our ranking is exemplary for the increasing dominance of the Chinese polysilicon industry," says Johannes Bernreuter, head of Bernreuter Research and author of the Polysilicon Market Outlook 2024. "China’s share in the global solar-grade polysilicon output will approach 90% in the coming years."Three aspirants for the top four spots in 2022 – GCL-Poly, Daqo and Xinte Energy – are running factories with very low-cost electricity from coal-fired power plants in the Xinjiang Uyghur autonomous region in northwestern China. The area has come under scrutiny after reports surfaced on the widespread use of forced labor there."These reports should be a wake-up call for western governments. If their countries don't want to become almost completely dependent on solar products from China for the transition to renewable energy, they have to implement an effective and long overdue industrial policy for a non-Chinese solar supply chain, in particular for ingot and wafer manufacturing," comments Bernreuter. "Low-cost and renewable hydropower in the northwestern USA, Canada, Norway and Malaysia offers them the chance to fuel an alternative supply chain without forced labor and a high carbon footprint."In-depth analysis and forecast of production volumes and market shares of the top ten polysilicon manufacturers through 2024 are provided in The Polysilicon Market Outlook 2024. The 76-page report contains elaborate scenarios of supply and demand, detailed forecasts of polysilicon prices and cash production costs through 2024 as well as the latest developments of the dominant Siemens process, fluidized bed reactor (FBR) technology and upgraded metallurgical-grade (UMG) silicon. For more information on the report, go to: https://www.bernreuter.com/polysilicon/industry-reports/polysilicon-market-outlook-2024/Press Contact: Bernreuter Research • Polysilicon Market Reports Lessingstr. 6 • 97072 Würzburg, GermanyYour Contact Partner: Johannes Bernreuter, Company Head Telephone: +49/931/784 77 81 E-mail: info@bernreuter.comAbout Bernreuter ResearchBernreuter Research was founded in 2008 by Johannes Bernreuter, one of the most reputable photovoltaic journalists in Germany, to publish global polysilicon market reports. As early as 2001, Bernreuter authored his first analysis of an upcoming polysilicon bottleneck and new production processes. Since publishing its first report in 2010, Bernreuter Research has gained a reputation of providing the most comprehensive and accurate polysilicon reports on the market.

You can edit or delete your press release Top 10 Ranking: A Turning Point for the Polysilicon Industry here

05-22-2018 | Science & Education
CCHATTY HK LTD
CCHATTY: combining AI technology with Chinese learning content for online Chines …
According to the statistics released by the Confucius Institute Headquarters, Currently, there are about 100 million Chinese learners around the global. This number will hit 130 million by 2020. For instance, in South Korea, around 10 million people are studying Chinese; Russia and Finland have listed learning Chinese as examinable courses, either as a first foreign language or a second foreign language. Therefore, Chinese learning worldwide has become an incremental
09-07-2017 | Advertising, Media Consulting, …
MarketResearchReports.biz
Chinese Influence on Global Infrastructure
"The Latest Research Report Chinese Influence on Global Infrastructure provides information on pricing, market analysis, shares, forecast, and company profiles for key industry participants. - MarketResearchReports.biz" About Chinese Influence Market This report outlines and analyzes all infrastructure projects around the world in which Chinese companies including owners, financers, and contractors are involved. Summary Throughout the 21st century, China has been a world leader in expanding its infrastructure base, creating the worlds largest high-speed rail
09-06-2012 | Business, Economy, Finances, B …
Chance & Bridge Partners
Chinese Investors Look Abroad
Beijing, China July 30, 2012 – An Outbound Investment Seminar hosted by Chance & Bridge Partners drew a large audience of investors, Chinese SMEs, and international partner law firms. Many Chinese investors and companies are looking to diversify their holdings and enter new markets. This has led to an increase in cross-border investment, banking, consulting, and legal services for the Chinese clients. Many of these areas were addressed during the
09-20-2011 | Science & Education
Capturing Chinese Publications LLC
Introducing A New Chinese Reader to Enable Chinese Language Students to Master C …
Capturing Chinese presents a new advanced Chinese reader helping students master the literature of China's best authors. Allowing students to put down their dictionaries and instead curl up with a book of Chinese literature, Capturing Chinese is a must have for intermediate and advanced Chinese language students. The new book, titled Capturing Chinese Stories: Prose and Poems by Revolutionary Authors, features five of the most influential authors in recent Chinese history
04-26-2011 | Science & Education
Capturing Chinese Publications LLC
Capturing Chinese Introduces New Chinese Textbook – Lu Xun’s ‘The New Year …
CHINA (April 2011) – To aid advanced and intermediate students who find difficulty in learning Chinese, Kevin Nadolny, founder of Capturing Chinese, has published another masterpiece of Lu Xun --- The New Year’s Sacrifice. This new book is part of the Capturing Chinese series written by the Father of Modern Chinese Literature,Lu Xun. Every book is set in an inventive format to ease the painstaking process of mastering the Chinese
01-14-2011 | IT, New Media & Software
Host1Plus
Host1Plus enters Chinese market
London, United Kingdom, January 14, 2011 - Host1Plus, a London based international hosting company has started its operations in Chinese market. The services will be managed from Singapore. Host1Plus has contracted with one of the best data centers in Singapore. This deal allows Host1Plus providing the locally bases services in main language of China. The Chinese support will operate 24/7. The Chinese version of the website is http://cn.host1plus.com in Chinese Simplified
Comments about openPR
We publish our press releases on openPR.de because we like people who are "open" - just like us.
Frank Obels, CEO, INCONET - Informationssysteme, Communication und Netzwerkberatung GmbH