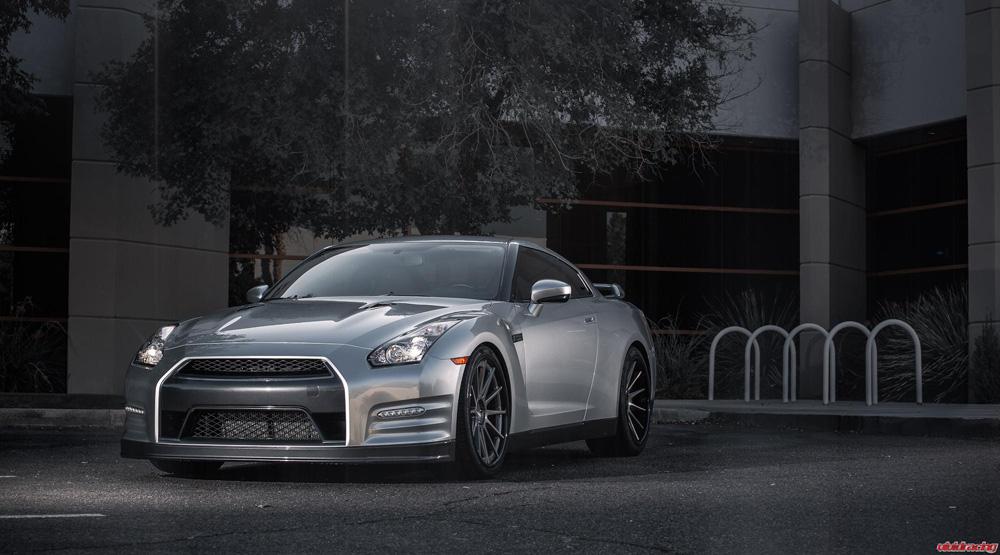 Vivid Racing recently did a photo shoot to show off their project car, the Nissan GT-R II. First and foremost is the new set of MHT’s Niche SPA 3-piece super concave wheels. The front is a 21×10 with a 285/30/21 Pirelli P-Zero and the rear is a 21×11 with a 305/30/21 Pirelli P-Zero tire. Featuring these custom GT-R center caps, the tinted brushed wheels with gloss black lips are a perfect finish for the Super Silver Nissan paint. Giving the GT-R its mean stance, is a KW Variant 3 Coil Spring Kit. The KW spring kit allows the GT-R to keep its dynamic suspension and use these enhanced springs to lower the car and provide a stiffer more balanced handling vehicle. The Coilover Sleeve kit features a primary and helper spring to still retain a nice ride on the steet. With a 800lb/in spring in the front and a 460lb/in spring in the rear, the KW kit is one that should not be skipped in the GT-R mod process. With the stance looking strong, some power bits were added to the vehicle. The easiest way to get power from the twin turbo vehicle is with a Cobb Accessport. The OBDII plug and play kit features different stage maps so as you mod you can easily update your tuning. The same unit used in the VR700 kit, the Cobb Tuning AP stage 1 map makes a plug in 60 horsepower. In addition to the tuning, also added was a new Agency Power Titanium exhaust system with midpipe to give it a great crisp tone. The new titanium catback (which is built to order only) features quad tips and an ultra lightweight design keeping the muffler only section to around 15lbs. In combination with the midpipe and stock downpipes (soon to be replaced), the GT-R now gives a whole lot of pull.Vivid Racing is a multi-million dollar small business in the automotive aftermarket industry. They have been featured in almost every magazine about their business and cars they have built. Rob and Dan have competed in 3 Gumball 3000 events, Bullrun Rally, and featured on ESPN2's "Import Racer" TV show. Vivid Racing has also built several demo cars including some for Pepsi/Mazda and Cusco/Subaru.Betty Mermelstein bjmerm@vividracing.com Dan Mermelstein Vivid Racing 1429 W. Scott Ave. Gilbert, AZ 85233 480 966-3040 x222

07-17-2012 | Tourism, Cars, Traffic
Vivid Racing
Vivid Racing Reveals Two New Racing Wheels from Volk
Vivid Racing announces that Volk Racing of Japan is bringing more incredible, stylish wheels to their line up. First is their Volk Racing G12 line up for premium sport vehicles. Available in both 19 and 20 inch setups, the elongated 12 spoke design has a double machined matte black finish. With 19′s coming in 8.5 and 9.5 inch widths, this new wheel is perfect with many BMW
06-28-2012 | Tourism, Cars, Traffic
Vivid Racing
Vivid Racing Goes Blue with Their Agency Power Wheels on the Porsche 997.2 Turbo
Vivid Racing thought they would turn up the heat on their Project Porsche 997.2 Turbo and have it draw some attention with an updated look. Even though the white body with black wheels and carbon fiber accents looked classy, it needed that extra bling edge that the old Project 997.1 Turbo had with its chrome red lip HRE Wheels. So they took a set of Agency Power Split
06-11-2012 | Tourism, Cars, Traffic
Vivid Racing
Project Car Scion FR-S Update from Vivid Racing
Vivid Racing’s new Project Scion FR-S is far ahead of the competition, including the BRZ tuners. First up is the exhaust system. This is one that any enthusiast will truly appreciate. The complete header back exhaust system is designed to be fully modular with the factory exhaust. This factor is for many reasons: performance, state regulations, budget, etc. Each piece can be used with the stock
06-11-2012 | Tourism, Cars, Traffic
Vivid Racing
Vivid Racing Uses VF Engineering to Boost the E90 BMW M3 V8
When you finally get that new car, you immediately start modifying it, spending thousands upon thousands on cool aftermarket parts. Before you know it, $10,000 is gone and though you think adding the intake + exhaust + headers + tune is cumulative in horsepower, it’s not. That’s why if you want big power on your naturally aspirated engine, there is no replacement for…. BOOST!!! Supercharging cars for over 15

01-08-2019 | Business, Economy, Finances, B …
Apex Market Research
Global Heavy Duty Equipment Market 2019 - Freightliner, Kenworth, Navistar, Niss …
A new market research study by Apex Market Research has projected that Heavy Duty Equipment revenues will exceed $XX Billion by 2023 at a CAGR of XX%. Market statistics is published in Global Heavy Duty Equipment Market 2018-2025 report. The Global Heavy Duty Equipment Market 2018-2025 report delivers comprehensive information about the Heavy Duty Equipment industry including valuable facts and figures, important aspects, and skilled opinions providing businesses with decisive information.
08-21-2018 | Energy & Environment
TMR Research
Hybrid Cars Market - Competitive Landscape 2025 | BMW, Nissan, Volkswagen
Global Hybrid cars Market: Overview The global hybrid cars market is envisaged to be benefited by the growing awareness about clean and eco-friendly cars amongst the common people. An alarming rise in the level of air pollution across the globe has resulted in the rise of temperature worldwide. As such, people are now more concerned and hence are adopting products that are carbon-free. Such awareness amongst people coupled with government initiatives
07-21-2017 | Advertising, Media Consulting, …
business news
Outboard Propellers Market 2017 - Honda, Suzuki, Yamaha, Mercury, Nissan
Global Outboard Propellers Market Report 2017 provides detailed analysis of Outboard Propellers market, enclosing detailed study of Outboard Propellers market for last few years and forecast up to year 2022. The Outboard Propellers market report analyses the global Outboard Propellers market from different angles to understand various factors impacting the global Outboard Propellers market. The reports enlightens the user with various applications, product type, end user of Outboard Propellers market. Moreover,
03-22-2017 | Logistics & Transport
Market Report
Emergency Ambulance Market 2017- TOYOTA, Horton, NISSAN, Leader Ambulance
Emergency Ambulance Market 2017 Industry research report provides important information to identify and analyze the market need, market size and competition. This market research report used in maintaining competitiveness over competitors. “Emergency Ambulance is a medical vehicle which is used to transport and rescue patients. Scope of the Report: This report focuses on the Emergency Ambulance in Global market, especially in North America, Europe and Asia-Pacific, South America, Middle East and Africa.
06-20-2012 | Tourism, Cars, Traffic
Agency Power Industries LLC
Agency Power Equips Cole Seely’s Nissan 240sx
Supercross Lites rider, Cole Seely, has other things on his mind when he is not winning races for Honda and Troy Lee Designs… It’s burning rubber! While Cole is out for a serious injury he sustained at the Salt Lake City Supercross event, he has recovered enough to take out his SR20 equipped Nissan 240sx and drift up some fun with friends. As one of Vivid Racing’s Sponsored
12-09-2009 | Business, Economy, Finances, B …
MVP Nissan of Exton
The All New Nissan Altima for 2010
MVP Nissan of Exton,a premier full-service New Nissan and Used Car dealership near Wilmington previews the all-new Nissan Altima which has been re-invented inside and out for 2010. Nissan Altima, which had been ranked as the segment leader in the 2009 J.D. Power and Associates Initial Quality Study (IQS) has been given a whole new look. For 2010, Nissan Altima can boast of refined exterior styling, refurbished interiors and
Comments about openPR
We publish our press releases on openPR.de because we like people who are "open" - just like us.
Frank Obels, CEO, INCONET - Informationssysteme, Communication und Netzwerkberatung GmbH