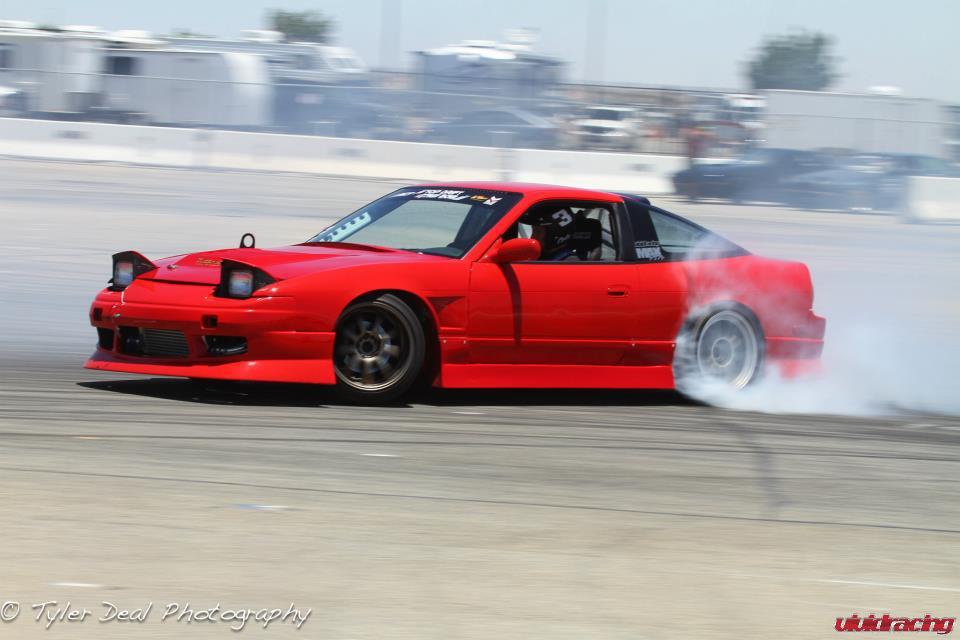 Supercross Lites rider, Cole Seely, has other things on his mind when he is not winning races for Honda and Troy Lee Designs… It’s burning rubber! While Cole is out for a serious injury he sustained at the Salt Lake City Supercross event, he has recovered enough to take out his SR20 equipped Nissan 240sx and drift up some fun with friends. As one of Vivid Racing’s Sponsored Athletes, they made sure Cole’s car was hooked up where it needed to be. Amongst his other mods, they recently installed an Agency Power titanium muffler catback exhaust, Agency Power universal oil cooler, Agency Power silicone radiator hoses for the SR20 motor, a Koyo radiator, and a Greddy Profec B Boost Controller. The need for speed can be fulfilled in one way or another!Agency Power Industries LLC has been bringing unique products and styling to the marketplace for tuner oriented vehicles since 2003. Agency Power was developed out of the need to provide quality, functional, and fashionable racing products. Based out of Gilbert, Arizona, Agency Power has established itself as one the core aftermarket companies for niche tuner products AP parts have been featured in magazines such as Modified, DSport, Import Tuner, Total 911, Bimmer, Super Street, and more.Betty Mermelstein bjmerm@vividracing.com Dan Mermelstein Agency Power Industries, LLC 1429 W. Scott Ave. Gilbert, AZ 85233 480 921-7422

09-11-2012 | Tourism, Cars, Traffic
Agency Power Industries LLC
Product Development from Agency Power Enhances the 2013 Porsche 991
Vivid Racing was able to get its hands on a 2013 Porsche 991 Carrera S to do product development with its sister company, Agency Power. The white color and beige interior are a nice combo with the 7 speed PDK transmission. Instantly noticed is the rear end with the sleeker looking taillights and the decklid. Looking at the decklid, there was only a small 30 by 8
06-11-2012 | Tourism, Cars, Traffic
Agency Power Industries LLC
Agency Power Helps Bucky Lasek, Skateboard Legend Turned Rally Driver, Outfit Hi …
We’re used to seeing Bucky Lasek on a skateboard. You probably played his character on Playstation 2 in Tony Hawks’ skateboard game series. If you ever caught an XGames or Dew Cup on ESPN or NBC, then you have seen him win more Gold Medals in Vert Skateboarding then any other rider. Having been a true car enthusiast with many built vehicles and track races under his
05-10-2012 | Tourism, Cars, Traffic
Agency Power Industries LLC
Agency Power Headers for Ferrari 360 99-05
The newest Agency Power exhaust creations are the Ferrari 360 headers that fit the 99-05 vehicles. Made from 304 stainless steel, the headers come either unfinished or with one of two ceramic coatings. Flanges are laser cut for a precision fit. Each header features a highly engineered collector to add additional horsepower and torque. These headers will add almost 25 wheel horsepower and 25 ft/lbs of torque. In addition to improving
04-23-2012 | Tourism, Cars, Traffic
Agency Power Industries LLC
Lamborghini Shows Off Custom Wheels from Agency Power
This Lamborghini Gallardo was shoed with a special 5.2 spoke style wheel through Agency Power‘s custom wheel division. This set of wheels was done in a Titanium Brushed Finished to give the wheel a dark, almost deep, look to it. The front is a 20×8.5 and the rear is a 20×11, fitted to be nice and flush with the fender. The wheels are logo clean and

09-11-2020 | Arts & Culture
BookBuzz.net
Author Douglas Cole Releases New Noir Drama - The White Field
Author Douglas Cole Releases New Noir Drama - The White Field Poet and two-time Pushcart nominee Douglas Cole is pleased to announce the upcoming release of his novel, The White Field. Scheduled for release on September 18, 2020 by TouchPoint Press, the book is already receiving rave reviews from readers and reviewers. This debut novel focuses on the roller-coaster ride that is the human experience, imagine the Three Stooges on acid. The
09-13-2017 | Leisure, Entertainment, Miscel …
Music Promotion Club
Discover Cole Parkinson’s refreshing hip hop music on Soundcloud
If you are looking for a track to enhance your way of life, then you must listen to Cole Parkinson. This Soundcloud artist creates inspiring and energetic tracks that are deep and refreshing to listen. The songs by this independent rap artist are mesmeric, which has gathered him several fans worldwide. The music comes through the mellow set of vibes, simple synths, gentle beats and smooth melodies. The significant words
03-10-2016 | Business, Economy, Finances, B …
Cole Asset Management Asia
Cole Asset Management Asia Your Financial Guide
Cole Asset Management Asia was born out of the passion of its founding partners to provide financial guidance to high net worth individuals, families, non-profit organizations and company retirement plans. Our goal is to take the accumulated wealth of experience of our team, our years of academic research and our decades of hands-on experience to help our clients nurture and protect their wealth. As a firm based within the vibrant and thrilling
12-17-2012 | Leisure, Entertainment, Miscel …
Teen Hollywood
Kanye West & G.O.O.D. Music Introduces New Signee Kidd Cole
Kanye West has been excited in the recent signing of his new artists Kidd Cole, according to The Associated Press. Cole's Lawyer, Laura Wasser, agrees that her client is very excited and like to move on but "is handcuffed to Mr. West " due to school obligations. Cole's' desire for national attention is vague because he feels that school is the number one priority. Sources tell us that '' Kanye would prefer
07-17-2012 | Industry, Real Estate & Constr …
SGS Consumer Testing Services
SGS and Cameron-Cole, LLC Announce Strategic Partnership
Cameron-Cole, a nationwide leader in sustainability and environmental consulting, and SGS, the world’s leading inspection, verification, testing, and certification company, are pleased to announce a strategic partnership agreement. The partnership enables the offering of comprehensive environmental services that allow clients to know the environmental impact of their operations, product or service through the entire life cycle – from the extraction of the raw material to the manufacturing, transportation, and distribution
07-22-2010 | Tourism, Cars, Traffic
Essentialtravel.co.uk
“CHERYL COLE EFFECT” SEES SPIKE IN CONCERN OVER TROPICAL DISEASES
Essential Travel reports a flurry of enquiries from worried customers, prompting the launch of a tropical diseases guide Leading travel extras provider EssentialTravel.co .uk is experiencing an influx of enquiries relating to tropical diseases, following the news that pop-star and X Factor judge, Cheryl Cole, is battling malaria. The insurance travel extras specialist has responded by compiling a tropical diseases guide to help confused or concerned customers. Cheryl, who is
Comments about openPR
We publish our press releases on openPR.de because we like people who are "open" - just like us.
Frank Obels, CEO, INCONET - Informationssysteme, Communication und Netzwerkberatung GmbH