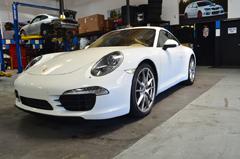 Vivid Racing was able to get its hands on a 2013 Porsche 991 Carrera S to do product development with its sister company, Agency Power. The white color and beige interior are a nice combo with the 7 speed PDK transmission. Instantly noticed is the rear end with the sleeker looking taillights and the decklid. Looking at the decklid, there was only a small 30 by 8 inch space with 2 fans and a logo. The front end has some more curves and the 997 lights are slightly carried over. But the big in your face change is the inside. The mini me center console of the Panamera is a big change. Buttons are everywhere. With the key turned on, the dash takes on all sorts of new LCD displays. Like many OEM’s taking cue from the aftermarket, the stock exhaust is fitted with almost a valvetronic type setup which opens a flapper valve on the center muffler when the sport button is pressed. However, for the Porsche enthusiast, the vehicle is still lacking a true sports car noise. Agency Power set out to build a modular exhaust system that would allow fitment for many different types of 991 drivers. The exhaust is broken down into 3 parts: The headers, the secondary mufflers, and the main center muffler. The first part built was the Secondary Muffler Bypass Pipes. These simple U/J pipes remove the mufflers that are tucked up in the rear quarter panels. Typically, in the past we either see a main center muffler or two mufflers with catpipes. So this was the first simplest part to change out. Keeping the same diameter for a perfect OEM replacement, these pipes are straight through which not only eliminates any muffler packing or baffling, but also the weight. Each stock muffler weighs approximately 15.6lbs. The Agency Power Muffler Bypass Pipes are about 3lbs each. Now eliminating restriction, about 25lbs off the rear end were saved. Because this part still retained the factory headers with cats and the factory center muffler, it added a slightly deeper tone to the exhaust but not a drastic droning change that a full exhaust could. Upon revving the car out stationary and on the dyno, you could hear the tone change nicely as you passed the 4000rpm mark. The 2013 3.8L DFI Carrera, like most cars, needed 2 more things: to be lowered and to have some new wheels. The H&R lowering springs were added, which maintain the PASM ride function. This lowers the front of the car, 1.2 inches and the rear 1.0 inch, giving the coupe a great stance. The stock wheels were finished off with a gloss black powdercoat. With paint matching the center caps, the over all package looks great.Agency Power Industries LLC has been bringing unique products and styling to the marketplace for tuner oriented vehicles since 2003. Agency Power was developed out of the need to provide quality, functional, and fashionable racing products. Based out of Gilbert, Arizona, Agency Power has established itself as one the core aftermarket companies for niche tuner products AP parts have been featured in magazines such as Modified, DSport, Import Tuner, Total 911, Bimmer, Super Street, and more.Betty Mermelstein bjmerm@vividracing.com Dan Mermelstein Agency Power Industries LLC 1429 W. Scott Ave. Gilbert, AZ 85233 480 921-7422

06-20-2012 | Tourism, Cars, Traffic
Agency Power Industries LLC
Agency Power Equips Cole Seely’s Nissan 240sx
Supercross Lites rider, Cole Seely, has other things on his mind when he is not winning races for Honda and Troy Lee Designs… It’s burning rubber! While Cole is out for a serious injury he sustained at the Salt Lake City Supercross event, he has recovered enough to take out his SR20 equipped Nissan 240sx and drift up some fun with friends. As one of Vivid Racing’s Sponsored
06-11-2012 | Tourism, Cars, Traffic
Agency Power Industries LLC
Agency Power Helps Bucky Lasek, Skateboard Legend Turned Rally Driver, Outfit Hi …
We’re used to seeing Bucky Lasek on a skateboard. You probably played his character on Playstation 2 in Tony Hawks’ skateboard game series. If you ever caught an XGames or Dew Cup on ESPN or NBC, then you have seen him win more Gold Medals in Vert Skateboarding then any other rider. Having been a true car enthusiast with many built vehicles and track races under his
05-10-2012 | Tourism, Cars, Traffic
Agency Power Industries LLC
Agency Power Headers for Ferrari 360 99-05
The newest Agency Power exhaust creations are the Ferrari 360 headers that fit the 99-05 vehicles. Made from 304 stainless steel, the headers come either unfinished or with one of two ceramic coatings. Flanges are laser cut for a precision fit. Each header features a highly engineered collector to add additional horsepower and torque. These headers will add almost 25 wheel horsepower and 25 ft/lbs of torque. In addition to improving
04-23-2012 | Tourism, Cars, Traffic
Agency Power Industries LLC
Lamborghini Shows Off Custom Wheels from Agency Power
This Lamborghini Gallardo was shoed with a special 5.2 spoke style wheel through Agency Power‘s custom wheel division. This set of wheels was done in a Titanium Brushed Finished to give the wheel a dark, almost deep, look to it. The front is a 20×8.5 and the rear is a 20×11, fitted to be nice and flush with the fender. The wheels are logo clean and

04-19-2021 | Tourism, Cars, Traffic
AMA Research & Media LLP
Supercar Market to see Booming Business Sentiments | Porsche, Ferrari, McLaren
A new business intelligence report released by Advance Market Analytics with title Global Supercar Market Insights, forecast to 2025.This report provides a detailed overview of key factors in the Global Supercar Market and factors such as driver, restraint, past and current trends, regulatory scenarios and technology development. A thorough analysis of these factors has been conducted to determine future growth prospects in the global market. Major Key Players in This
07-23-2018 | Advertising, Media Consulting, …
MarketResearchReports.biz
Supercar Market: Porsche, Bentley, Ferrari, AstonMartin, Lamborghini
MarketResearchReports.Biz adds “Global Supercar Market Share, Size, Trends and Forecast Market Research Report” reports to its database. This report provides a strategic analysis of the Supercar market and the growth estimates for the forecasted period. This report studies the global Supercar market status and forecast, categorizes the global Supercar market size (value & volume) by manufacturers, type, application, and region. This report focuses on the top manufacturers in North America, Europe,
01-23-2018 | Tourism, Cars, Traffic
business news
Global Hyper Cars Market 2018 - Bugatti, Ferrari, Porsche, Maserati
The statistical surveying information incorporated into the Hyper Cars report is the aftereffect of significant essential and optional research exercises. The report fragments the global Hyper Cars market based on makers, item compose, applications, and regions. In this report, each fragment is contemplated completely and measurements are introduced in detail. The report offers an exact outline of the global Hyper Cars advertise covering key factors, for example, drivers and restrictions
09-12-2017 | Business, Economy, Finances, B …
market research 2017
Automotive Supercharger Market Demand 2017-2022 Daimler, Porsche, Ford, Ferrari
Automotive Supercharger Market Research Report A market study based on the " Automotive Supercharger Market " across the globe, recently added to the repository of Market Research, is titled ‘Global Automotive Supercharger Market 2017’. The research report analyses the historical as well as present performance of the worldwide Automotive Supercharger industry, and makes predictions on the future status of Automotive Supercharger market on the basis of this analysis. Request For Sample
06-20-2012 | Tourism, Cars, Traffic
Porsche of Ocala
The 2013 Porsche Boxster Arrives at Porsche of Ocala
Ocala, FL – June 19, 2012 – Porsche of Ocala today announced that the new 2013 Porsche Boxster models have arrived in their Ocala showroom. The third-generation of the highly regarded Porsche sports car launches on June 28. Never before in the history of the Porsche Boxster has a change of generation been so comprehensive. The new Boxster weighs up to 77 pounds less than the previous generation while riding on
02-07-2012 | Tourism, Cars, Traffic
Porsche of Ocala
The New, Seventh-Generation Porsche 911 Debuts at Porsche of Ocala
Ocala, FL –February 4, 2012–Porsche of Ocala today announced that the new Porsche 911 Carrera and Carrera S models have arrived in their Ocala showroom. The latest generation of the iconic Porsche 911 goes on sale Feb. 4. Following its introduction last fall, automotive media world-wide have designated the latest 911 as the best iteration of Ferdinand Porsche’s sports car vision yet. It is destined to remain every bit the icon
Comments about openPR
We publish our press releases on openPR.de because we like people who are "open" - just like us.
Frank Obels, CEO, INCONET - Informationssysteme, Communication und Netzwerkberatung GmbH