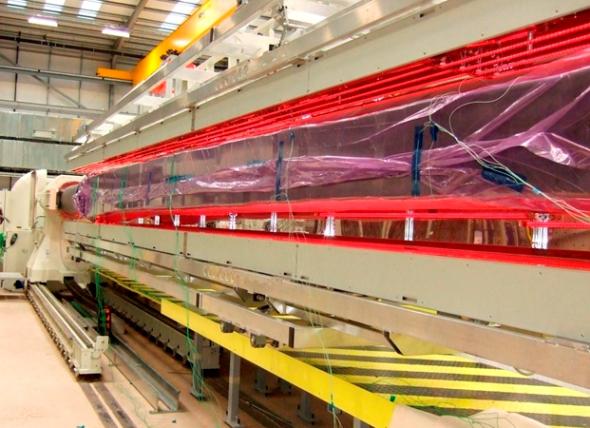 An infrared heating system from Heraeus Noblelight is helping to ensure the high quality of composite aerospace structures manufactured at the new GKN Aerospace facility at Western Approach, near Bristol. The system, which is used to provide interim processing of the laid-up composite rear spar assembly of the Airbus 350 XWB to prevent subsequent wrinkling, was custom-designed and developed in close co-operation with GKN Aerospace engineers following initial tests at Heraeus’ Application Centre in Neston, Wirral. GKN Aerospace is a world-leading, global first tier supplier of airframe and engine structures, components and assemblies to a wide range of aircraft and engine prime contractors and other first tier suppliers. It has invested £170 million to create its new composite wing structures manufacturing and assembly facility, which represents an international centre of excellence. The new “Western Approach” site consists of two main buildings. The first contains a state-of-the-art composites manufacturing operation that incorporates the latest, automated high-speed, precision production technologies. The second building houses an innovative and “moving line” assembly operation that uses automated, guided vehicles to move the wing structures through a series of semi-robotic work stations. An important work package already underway at the site is the manufacture of the all-composite rear wing spars for the Airbus A350 XWB. Each of the three rear wing spars is manufactured by laying up pre-preg carbon composite tape on a mandrel and then curing the assembly in an autoclave. However, such complex lay down operations can sometimes produce wrinkling of the final surface because of voids and excess resin between plies or laminates. One proven answer to this problem is de-bulking, which involves enclosing the composite structure in a vacuum bag at various stages in its manufacture and then compacting or squeezing out of air and volatiles between plies or pre-preg laminates under moderate heat and vacuum to insure seating on the mandrel, to prevent wrinkles, and to promote adhesion. GKN Aerospace’s engineers decided that de-bulking could provide significant benefits and asked Heraeus to carry out initial trials using infrared emitters to provide the required heat. These were followed by on-site trials using a portable infrared system at Western Approach and these were so successful that a prototype system was supplied The prototype system was finally replaced by a scaled-up 465 kW production system, where each of the three heating sections now has seven controllable zones to provide precise surface heating.Heraeus, the precious metals and technology group headquartered in Hanau, Germany, is a global, private company with more than 160 years of tradition. Our fields of competence include precious metals, materials, and technologies, sensors, biomaterials, and medical products, as well as dental products, quartz glass, and specialty light sources. With product revenues of €4.8 billion and precious metal trading revenues of €21.3 billion, as well as more than 13,300 employees in over 120 subsidiaries worldwide, Heraeus holds a leading position in its global markets. Heraeus Noblelight GmbH with its headquarters in Hanau and with subsidiaries in the USA, Great Britain, France, China and Australia, is one of the technology- and market-leaders in the production of specialist light sources. In 2011, Heraeus Noblelight had an annual turnover of 103 Million € and employed 731 people worldwide. The organization develops, manufactures and markets infrared and ultraviolet emitters for applications in industrial manufacture, environmental protection, medicine and cosmetics, research, development and analytical measurement techniquesHeraeus Noblelight Reinhard-Heraeus-Ring 7 D-63801 Kleinostheim Germany Press: Marie-Luise Bopp marie-luise.bopp@hereus.com www.heraeus-noblelight.com/infrared

04-13-2012 | Science & Education
Heraeus Noblelight
Seven Good Reasons for the D2plus Light module
Heraeus Noblelight, one of the technology and market leaders in the field of specialty light sources will again exhibit at ANALYTICA, to be held in Munich, Germany in April 2012. Heraeus will introduce its “Seven Good Reasons for D2plus Light modules” at the show, making the life of instrument developers easier. Developing new analytical instruments places ever-increasing demands on engineers, to design-in the best available light-source and avoid future operational problems.
02-22-2012 | Energy & Environment
Heraeus Noblelight
Specialty Light Sources for the Printing Industry
Hanau, February 2012 The Competence in Specialty Light Sources for printing systems Special and personalized printing processes need special treatment. The ink of ink jet or laser printers need to be completely dried or cured before the printed sheets are passed on for subsequent operations such as stacking, cutting, folding or gluing. Infrared or UV technology is used for drying and curing, depending on the type of ink. Heraeus Noblelight presents its
01-25-2012 | Industry, Real Estate & Constr …
Heraeus Noblelight
Infrared Emitters Improve Lacquered Surfaces
Many screens, internal claddings in cars and high value cosmetic packages are manufactured from plastics and contain a protective lacquer or finishing. The drying of the coating on the plastic components is not a trivial matter, for the surfaces need to be perfectly cured without applying to much heat to the plastic. Infrared heaters transfer energy in a contact-free manner and are easy to control. Consequently, the heat is precisely
12-19-2011 | Science & Education
Heraeus Noblelight
PID for Selective BTEX Determination
• Determining BTEX VOCs with a 10.0 eV PID lamp • Heraeus PID lamps: high quality pure spectrum and long life Heraeus Noblelight, one of the technology and market leaders in the field of specialty light sources, launches the latest development in its Photoionisation Detector Lamps (PID) range: a 10.0 eV PID lamp which offers increased detection sensitivity in BTEX determination. “A CaF2 filter is attached onto our standard 10.6