‘Francis, through Interfaith Dialog, has become the Pope of all Religions,’ Says a Senior Vatican Correspondent 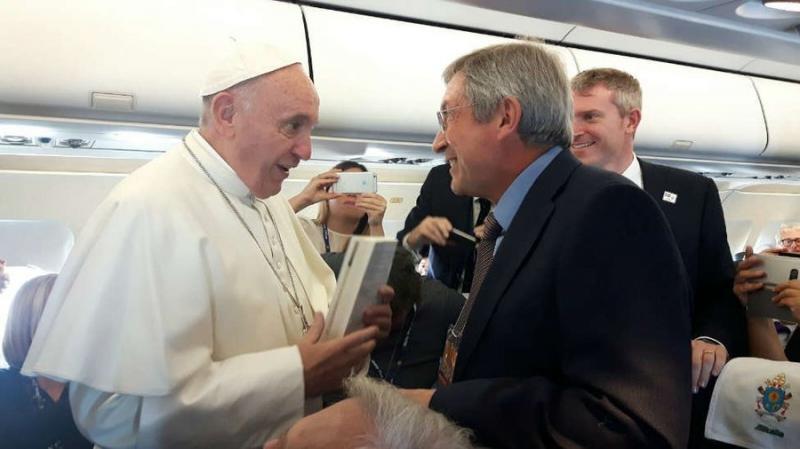 Juan Vicente Boo is a veteran news correspondent who has been following the Popes of Rome for 22 years. As a Vatican insider stationed in Vatican City, he has met with Pope John Paul II, Pope Benedict XVI and Pope Francis. Juan Vicente Boo travels with the Pope and reports on all his activities. On February 21, 2021, during an interview on COPE radio in Spain, Juan Vicente Boo affirmed that “Francis, through his dialogue with all religions, has become the Pope of all religions.” [1]Juan Vicente Boo is absolutely correct because he is only echoing what everyone in the Vatican already knows. Ecumenism and interfaith dialogue are healing the deadly wound (Revelation 13:3) and making Francis the Pope of all religions. Why can’t Protestants understand this? Why don’t Seventh-day Adventist leaders open their eyes? Rome’s interfaith movement has unleashed a series of disastrous errors that are distorting the divinely revealed truths of God by replacing biblical revelation with human relativism.This has led to the false affirmation that all religions are one, and that God wants there to be religious diversity, just as He has willed gender and sexual diversity. Diversity is another name for perversity, and this teaches that the followers of every religion are children of the same God. That is why under Pope Francis’ universal fraternity (Fratelli Tutti), every pagan god, every false religion and every idol known to man is embraced without hesitation.“What say I then? that the idol is any thing, or that which is offered in sacrifice to idols is any thing? But I say, that the things which the Gentiles sacrifice, they sacrifice to devils, and not to God: and I would not that ye should have fellowship with devils.” 1 Corinthians 10:19, 20.Thus, Francis has become the Pope of all religions. If Francis is the Pope of all religions, then he is the Antichrist because the true ministers of Jesus represent Christ; not Mother Earth, Buddha, Allah, Ganesha, Shiva, Vishnu or idols. Pope Francis is uniting the Christian and Protestant world with false idols, relegating the true God of heaven to the same level as false gods. This apostasy, which is leading the world to violate the First & Fourth Commandments, is being spearheaded by the Vicar of Diversity, not the Vicar of Christ.Where is the condemnation by the Protestant world? Where are the protests by the commandment-keeping people? Whenever dangerous heresies threaten to lead people astray, God’s faithful servants have always promptly intervened by giving a warning. Any failure on our part to speak up will only allow these errors to increase more and more.The First Century Christians and martyrs never met in prayer with the idols of their time: Jupiter, Mars, Diana and others. They believed that any collaboration with these false gods was betraying the gospel of Christ. They were right. It is this generation that has abandoned the faith. The early church in its infancy and purity did not compromise the truth, they were too busy converting men and women to Christ. Here is the command given to us by Christ:“And he said unto them, Go ye into all the world, and preach the gospel to every creature. He that believeth and is baptized shall be saved; but he that believeth not shall be damned.” Mark 16:15, 16.This is not an ecumenical call to unite with pagan idols. This is the true work that the followers of Christ will do. At this time, the call is to expand the preaching of the everlasting gospel. This work must be done before the return of Jesus. As Pope Francis leads “Christians” and “Protestants” to betray the gospel commission, may our Heavenly Father place in our hearts a new sense of urgency to lead us to a greater willingness to share God’s last message of mercy in all its fullness with the world.Sources[1] https://www.cope.es/programas/fin-de-semana/noticias/mas-anos-siguiendo-las-noticias-del-vaticano-francisco-papa-todas-las-religiones-20210221_1151659Contact: Andy Roman, Publisher Address: Advent Messenger, PO Box 96, Dover, OK 73734 Phone: (888) 299-2119 Website: www.adventmessenger.org Email: adventmessengers@gmail.comAbout: Advent Messenger provides news and commentary on current events, top stories, social trends and political and religious events. For more news visit www.adventmessenger.org

You can edit or delete your press release ‘Francis, through Interfaith Dialog, has become the Pope of all Religions,’ Says a Senior Vatican Correspondent here

11-21-2020 | Leisure, Entertainment, Miscel …
Advent Messenger
Fratelli Tutti: Ganoune Diop Praises Pope Francis’ Encyclical
The pope is working overtime to unite all of the religious faiths of the world into one family. Pagans, spiritualists, Mother Earth worshippers, homosexuals, Protestants, Catholics, indigenous faiths and eastern religions are all part of Rome’s one-world brotherhood. Truth and doctrine no longer matter anymore according to the Pope’s encyclical, Fratelli Tutti. Just yesterday, Roman Catholics, Evangelicals, Orthodox and Seventh-day Adventists gathered to praise Fratelli Tutti. Over thirty religious leaders
02-22-2019 | Arts & Culture
Wiedmann Media AG
Pope Francis receives unique Bible translation from Germany
Rome / Stuttgart. Faith can move mountains. In this case, the saying goes even beyond death. At the general audience, in the audience hall Paul VI in Rome, Pope Francis received the number ONE of the limited Wiedmann Bible ART edition on February 20th. The original is worldwide unique. It is a visual narrative of the Bible depicting the Old and New Testament in 3,333 illustrations. A printed copy of
09-13-2012 | Health & Medicine
Altitude Marketing
CGIRB promotes Dawn Pope to Chief Operating Officer
September 6, 2012 – Research Triangle Park, N.C. – Copernicus Group IRB (CGIRB), a leading independent institutional review board, today announced the promotion of Dawn Pope to Chief Operating Officer. In her new position, Ms. Pope will provide leadership and direction for the overall operations of the company, planning and coordinating the development of strategic objectives and goals. Ms. Pope came to CGIRB from Clinical Trials Support Services, Inc., in 1998.
04-28-2011 | Politics, Law & Society
Androvett Legal Media
Texas Center for Legal Ethics Names 2011 Pope Awards Recipients
AUSTIN – The Texas Center for Legal Ethics is pleased to announce this year’s winners of the Chief Justice Jack Pope Awards: Federal Judge Will Garwood and Austin attorney William Hilgers. The Pope Awards are given each year to one judge and one lawyer who epitomize the highest standards of professionalism and integrity. The awards honor one of the founders of the Texas Center for Legal Ethics, former Chief
02-02-2011 | Science & Education
EsoGuru
UFO Investigator Nick Pope discusses the Real X Files
The event Nick Pope will begin the lecture by giving an overview of the British government’s involvement with the UFO phenomenon, which dates back to 1950, when the Ministry of Defense established a small committee to examine the phenomenon, known as the Flying Saucer Working Party. He will explain government policy on this issue and detail the way in which investigations were carried out. Nick Pope will then discuss a number of cases
09-26-2006 | Politics, Law & Society
Imperato-Brooks 2008
Vatican News: Papal Knight Speaks on Pope Benedict XVI and Religious Freedom
Los Angeles – September 24, 2006 - Today Papal Knight and 2008 US Presidential Candidate Daniel Imperato spoke out regarding the recent statements of Pope Benedict XVI and religious freedom. “I call on the world today, particularly the Christians and the Muslims, to realize that our Pope Benedict XVI has made a mistake in addressing the issue of Prophet Muhammad during his trip to his hometown Regensburg, Germany.
Comments about openPR
We publish our press releases on openPR.de because we like people who are "open" - just like us.
Frank Obels, CEO, INCONET - Informationssysteme, Communication und Netzwerkberatung GmbH