Cogeneration at Düsseldorf International Airport: Reliable energy for the future 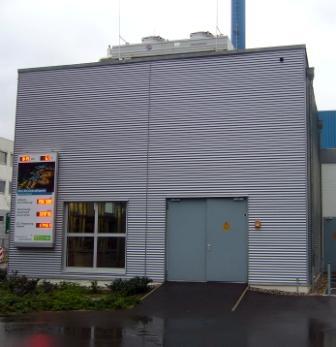 Germany’s energy policy shift away from nuclear energy in mid 2011 means that the share of renewable resources it uses to generate electric power will increase to 35% by 2020. This can be accomplished through a combination of measures including the increased use of cogeneration. The reason: Natural gas-fired plants that produce both heat and electricity and that are used in combination with heat storage equipment may be just the right way to deal with the increasingly wider fluctuations in the level of energy being fed into the power system. Even before Germany’s policy shift in mid 2011, Düsseldorf International Airport offered a good example of how the demands for combined heat and power (CHP) can be optimally met by gas engines and power generators from MWM.MWM, a Mannheim-based company with a rich tradition of engineering excellence, was the general contractor. It teamed up with the plant’s operator, the municipal utility Stadtwerke Düsseldorf, to configure the two heat-controlled CHP units. At the heart of the CHP system are two natural gas-fired TCG 2020 V12 engines. The heat that is generated is fed into the airport’s heating system as a base load that is used to heat facilities like hangars and aircraft maintenance buildings. The total electrical output is 2 x 999 kW, and the total thermal output is 2 x 1197 kW.A unique feature of this twin system, which is individually housed in noise control enclosures, is that the airport’s existing Heating Plant III was expanded to include a powerhouse equipped with heat-controlled medium-voltage modules combined with a stratified heat storage tank, all integrated directly into the active heating system. The electrical power that is generated as a byproduct is fed into the public power grid to help meet peak-load requirements. The multiple-engine systems, which were designed to operate efficiently and take up the least possible space, were installed within a short time frame and put into service for Stadtwerke Düsseldorf.Particularly impressive is the fact that, of a total of 8760 theoretically available operating hours in 2011, the plant was in actual service for about 8550 hours. Not surprisingly, this generated smiles of satisfaction among the operating team. “In fact, we got 8631 operating hours from one of the gas engines,” reports a happy Michael Heidepeter, manager of Heating Plant III at Düsseldorf International.The product portfolio in MWM’s TCG 2020 series includes a 16-cylinder version and a 20-cylinder version in addition to the 12-cylinder model used in this project. MWM has increased the outputs of this gas engine line to 1200, 1560 and 2000 kW electrical, respectively, which amounts to an effective increase of electrical efficiency of up to 3.3%. In particular this series natural gas- and special gas-powered engines achieves top performance and is setting new standards in direct comparison with other models currently on the market.Looking back, Michael Heidepeter thinks the decision to go with MWM was the right one. “Since the project was completed in 2010 and our own district heating system was optimized to operate with the CHP plant, the plant has been working perfectly—day in, day out,” adds Heidepeter.Please visit our website for further information: http://www.mwm.net/The long-established company MWM in Mannheim, Germany, is one of the world's leading system providers of highly efficient and eco-friendly complete plants for decentralized power supply with gas and diesel engines. For 140 years, the company has stood for the reliable, uninterrupted provision of electricity, heat, and cooling at all times and at any location. MWM has 1,250 employees around the globe.Frank Fuhrmann Head of Communications & PR T +49 6 21/3 84- 86 33 F +49 6 21/3 84- 87 47 E frank.fuhrmann@mwm.netMWM GmbH Carl-Benz-Straße 1 DE-68167 Mannheim/Germany

You can edit or delete your press release Cogeneration at Düsseldorf International Airport: Reliable energy for the future here

10-08-2013 | Energy & Environment
MWM GmbH
Name change: MWM GmbH to become Caterpillar Energy Solutions GmbH
Mannheim, October 08, 2013 | On November 1st, MWM GmbH will change its name to Caterpillar Energy Solutions GmbH. The name change solely affects the legal entity, the established MWM brand is being continued. This step underscores MWM's belonging to the global company Caterpillar. Caterpillar is the world's leading manufacturer of construction and mining equipment, diesel and natural gas engines, industrial gas turbines and diesel-electric locomotives. Two years ago, MWM, the
01-24-2013 | Energy & Environment
MWM GmbH
MWM Asia Pacific receives the 2012 Singapore HEALTH Award in Bronze
Mannheim, Jan. 10, 2013 / At the end of November 2012 MWM Asia Pacific Pte. Ltd. received the Singapore HEALTH 2012 bronze health award. The MWM subsidiary received this important award, which is granted in platinum, gold, silver and bronze, for its exemplary dedication to promoting workplace health. The Singapore HEALTH Award is presented every two years by the Singapore government’s Health Promotion Board to give recognition to companies,
03-03-2012 | Energy & Environment
MWM GmbH
The MWM model series – innovation and constant development
Mannheim, March 1, 2012 | After two years of constant development, the new version of the TCG 2032 (the largest MWM genset) was launched in January 2012. Optimized spark plugs and turbocharger technology have resulted in electrical efficiency of up to 44.2% with an output of 3,333 to 4,3000 kWe (in the V12 and V16 cylinder versions). Thanks to excellent operational experience, the period of operation up to the major
11-01-2011 | Energy & Environment
MWM GmbH
Caterpillar Completes Acquisition of MWM
PEORIA, Ill. – Caterpillar Inc. (NYSE: CAT) today announced it has finalized the purchase of MWM Holding GmbH (MWM) from 3i and funds managed by 3i for €580 million (approximately $800 million). This action follows the European Commission’s recent clearance of the transaction. MWM is a leading global supplier of sustainable, natural gas and alternative-fuel engines. The acquisition of MWM will enable Caterpillar to significantly expand customer options for sustainable power

08-07-2018 | Industry, Real Estate & Constr …
Thermoseal Group
Join the Industries’ In-Crowd at the ThermoBAR in Düsseldorf!
Thermoseal Group is set to host its popular ThermoBAR to coincide with the Glasstec 2018 Exhibition in Düsseldorf. Entertainment, food and drinks will be flowing on Wednesday 24th October at the after-show party at the ThermoBAR, aka McLaughlin’s Irish Pub in the Altstadt – the same location as last time. Entry is limited to those issued with entrance bands. E-mail marketing@thermosealgroup.com to reserve yours now! Thermoseal Group is also
10-19-2016 | Energy & Environment
Thermoseal Group
Glasstec Düsseldorf Success for Thermoseal Group
Thermoseal Group reports a successful attendance at the Glasstec Exhibition in Düsseldorf 20-23 September 2016, both through enquiries at the Group’s 50 sq. ft. booth and also at their highly successful after-show party hosted at the ThermoBAR in Düsseldorf’s Altstadt. The team at Thermoseal Group are now responding to the multitude of leads from distributors and sealed unit manufacturers in 39 countries for their UK-manufactured Thermobar and Thermoflex industry-leading warm edge
03-31-2016 | Arts & Culture
Pretty Portal
Lovely people in Düsseldorf
Starting on 8th of April, Pretty Portal presents a collective show with works that focus on human behaviour. On display are paintings and drawings by Natalia Rak, Pixelpancho and Sokar Uno. In the show, the artists look behind the facade of human being and present us "Lovely people". Pixelpancho topic is the incarnation of machines, or vice versa, the transformation from human to robot-like creatures. Puppet like people baring their interior mechanics. Natalia
03-21-2016 | Industry, Real Estate & Constr …
CERATIZIT S.A.
Visit CERATIZIT at Wire 2016 in Düsseldorf
At stand C53 in hall 9 Hard Material Solutions by CERATIZIT and Toolmaker Solutions by CERATIZIT are presenting carbide solutions for your specific industrial application from April 4 – 8 this year. Wire ranks amongst the worldwide leading wire and cable trade fairs and will take place at the trade fair ground ‘Messe Düsseldorf’ over a period of five days. The top-class brands Hard Material Solutions by CERATIZIT (link to: http://www.ceratizit.com/products/wear-protection/hard-material-solutions-by-ceratizit/) and
07-29-2011 | Advertising, Media Consulting, …
Textklinik®
Textklinik® Düsseldorf devotes campaign to Japan
Textklinik® has a very special connection to Japan, thanks to the many years the company has been working with Japanese translators. The city of Düsseldorf, where Textklinik® is headquartered, is sometimes referred to as the Japanese capital on the Rhine. For these reasons, the company has kept a close eye on the situation in Japan during these last few months since the catastrophic tsunami. The Textklinik® team members’ hearts went
07-30-2010 | IT, New Media & Software
at-visions Informationstechnologie GmbH
OneVision TV for Hyatt Hotel Düsseldorf
The fifth Hyatt Hotel in Germany is another new highlight of Düsseldorf Media harbour. Contemporary and classic in design it is home to 303 rooms and suites. Located in one of two towers at the tip of a peninsula it provides a wonderful view of the harbor, old town and the Rhine. Design is of upmost importance to the hotel and General Manager, Monique Dekker, was keen to point out how
Comments about openPR
Your portal is fast, simple, and easy to use. Others may have more functions but they also demand more editing time, you have to preformat the text in order to achieve a good result etc. I think openPR is really fantastic!
Andreas Knepper, wallmedien AG