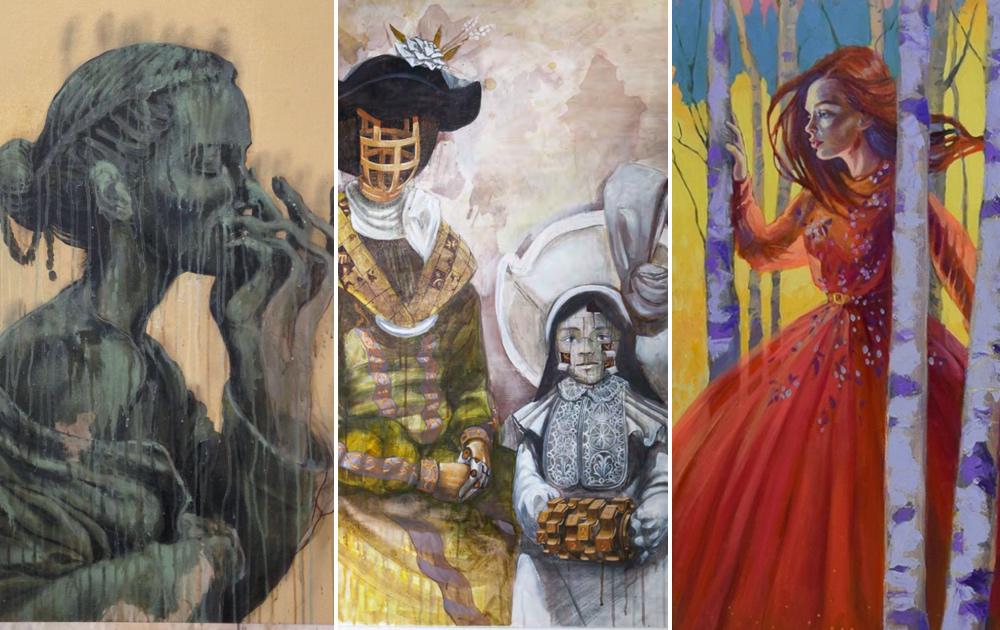 Starting on 8th of April, Pretty Portal presents a collective show with works that focus on human behaviour. On display are paintings and drawings by Natalia Rak, Pixelpancho and Sokar Uno. In the show, the artists look behind the facade of human being and present us "Lovely people".Pixelpancho topic is the incarnation of machines, or vice versa, the transformation from human to robot-like creatures. Puppet like people baring their interior mechanics. Natalia Rak takes us on a rollercoaster of emotions. With bright colors, she tells stories of precipices, ecstasy, fear and romance. In Sokar Uno's works solid contours blur. He shows his protagonists in states of confusion and alienation.Natalia Rak’s beautiful murals show up all around the world. The Polish artist’s colours glow with an intensity that’s a fresh breath to the streetart scene. Her artworks combine a focus on female imagery and wonderful compositions. Born in 1986, this young female artist is fast being recognized in Polish contemporary art circles. She has been featured at „Walk and Talk Festival“ on Madeira Island, „No Name Festival“ in France, „Stroke Art Fair“ and „Art Whino“ just to name a few. Last year she won the „Artbattles” in New York. Her mural „The legend of giants“ was voted as one of the Top5 urban art pieces created in 2013, next to artworks from Banksy and JR.Danny Olda for HiFructose (12/1013): „Poland based artist Natalia Rak is adept on a variety of scales. Her style and technical skill holds true from the canvas to the multi-story mural. Rak paints with a particularly brightly colored palette, scenes populated by stylized yet still realistic people. She’s had an interest in art since she was only ten years old that has stayed with her through graduation from the University of Lodz studying fine art. Rak has since been exhibiting work on canvases and walls internationally as well as standing out in her home country which is seeing a surge in street and mural art.PIXELPANCHO has a spot on robots. It is the ever-recurring theme in his work. “I am driven by a forgotten world that is hidden under a thick layer of dust and dirt. There are robots, as a creation of mankind, battered and worn, a symbiosis of organic and inorganic, with their rusting iron bodies falling apart. Full of dreams, desires and hopes.”In his surrealist imagery people, puppets and robots merge into one metamorphosis, referring to big brands of commerce, superheroes and reputable pop icons, where – dominated by permanent change -, the collapse is imminent. Pixelpancho does not only convince due to its eye-catching designs, but also because of its unique style, which draws from different and diverse sources.Born in Italy, he studied at the “Albertina Academy of Fine Arts,” and the Academy of Valencia. On his numerous trips to the most diverse countries, the artist had many opportunities to participate in festivals and to show his works in exhibitions. Pixelpancho is one of the new key players of Italian urban art scene, which has gradually developed with artists such as Blu, Erica il cane, the Fame Festival and Studio Chromie.Berlin based artist Sokar Uno is one of the great talents of the East German graffiti scene. We noticed the sensitive work by the illustrator and restorer, who grew up with the spray can, already a while ago. At least since his solo show "Depth Off Loneliness" in New York, he has now impressively entered international territory. In his work, Sokar Uno concerns with propagating loneliness of our urban existence - Together alone! Socially acceptable individualists scourged by the city in which we live and certainly hangoverish left in the role of our lives. Sokar Uno provokes the deceleration with the usual surreal representation of his protagonists in familiar situations.The art gallery Pretty Portal was founded in 2007 and is focussing on urban contemporary art. Owner and curator Klaus Rosskothen presents a mixture of established artists and emerging, fresh talents.Pretty Portal works with international artists like BTOY, Chazme, FinDAC, ETNIK, Guy Denning, JANA&JS, L.E.T., Pixelpancho, David Monllor, DECYCLE, Natalia Rak, SAM3, and Wolfgang Krell.Urban Art combines classical art forms with pop, punk, graffiti and street art, while reflecting the thoughts and moods of today, which are most likely perceived in the major metropolitan areas, the melting pots of our society. The already well-known mash-up, the interweaving of known and unknown, citation, deconstructing and re-crosslinking is sensed and used by urban artists in the visual arts. Urban Art has become an art form in the field of contemporary art.Pretty Portal presents and documents a fast-moving, radical new art direction. Gallery owner and curator Klaus Rosskothen sees Pretty Portal as a fusion of street and White Cube, a metalevel where Urban Art meets gallery visitors and collectors. Pretty Portal shows paintings, drawings, prints, collages, photographies, video installations and sculptures.Pretty Portal Brunnenstr. 12 40223 DüsseldorfKlaus Rosskothen rosskothen@prettyportal.de +49-163-6040846