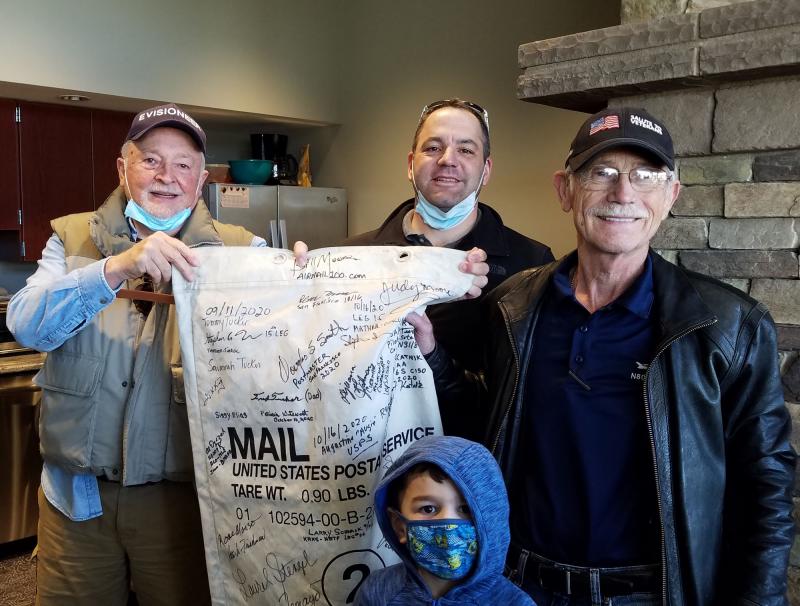 OMAHA, NE — February 22, 2021 will mark the 100th anniversary of the flight that “saved” the US Airmail. In a daring overnight flight through snow and fog, Omaha-based airmail pilot Jack Knight flew from North Platte, Nebraska to Chicago, Illinois, fulfilling a pledge by then Assistant Postmaster Otto Praeger to fly the mail at night, shortening the delivery time to mere hours instead of days.It is on the anniversary of that historic flight that the Airmail 100 Centennial Flights project will turnover to the American Philatelic Society and American Philatelic Research Library in Bellefonte, Pennsylvania a USPS mail sack that 14 volunteer pilots carried from Long Island, NY to San Francisco Bay. Flying in relay last September 2020, they safely retraced the exact same 2560-mile route flown a century ago. Despite mechanical gremlins, rolling thunderstorms, a freakish late summer snowstorm over the Rockies, and visibility-killing California wildfires, the all-volunteer effort turned over the sack of several thousand commemorative postcards and letters to San Francisco Postmaster Douglas Smith exactly 100 years to the day, hour, and location as in 1920.“We chose the February 2021 date because of Jack Knight’s history-making flight that is recognized as having “saved” the air mail service, for which Congress was poised to drastically cut funding in the light of its high operating costs and loss of life,” explains project organizer Bill Moore. “Overnight, Jack became a national hero and his bravery and skill, as well as no small amount of luck, made it virtually impossible for Congress to defund the service. America would become a global leader in aviation in no small part because of the airmail service and the dedication and courage of US Airmail pilots like Jack Knight, nearly three dozen of whom lost their lives.”The official handover of the volunteer pilot-autographed mail sack, as well as at least one of the special cancellation stamps made for the project, and the pilot’s log book that accompanied the mail, is scheduled to take place at 11AM local time in Bellefonte. Representing AirMail100 will be Stephen Tucker who helped organize reception events in the Bay Area and oversaw the efforts to have all the participating pilots sign the bag.“We are honored and pleased that the directors of the American Philatelic Society and American Philatelic Research Library have agreed to include these items in their extensive airmail collection. We hope that someday these items also will come to be as cherished as those currently in the collection. It is our small way of expressing our admiration for what that past generation accomplished in seeing the mail through the storm and dark of night.”For additional information on the American Philatelic Society contact:Kenneth Martin, Director American Philatelic Society 100 Match Factory Place Bellefonte, PA 16823 Phone: 814-933-3803 Fax: 814-933-6128Airmail 100 Centennial Flights 1915 Southview Drive Papillion, NE 68046AirMai100 Centennial Flights is a volunteer group who retraced the original 1920 flight route of the US Post Office's transcontinental airmail from Long Island, NY to San Francisco, CA.

11-18-2020 | Logistics & Transport
ReportsWeb
Exclusive Airmail Market To Register Remarkable Growth | Competitive Outlook By …
Airmail market research report provides depth analysis of the market dynamics across five regions such as North America, Europe, South America, Asia-Pacific, Middle East and Africa. The segmentation of the market by type, application, and region was done based on the thorough market analysis and validation through extensive primary inputs from industry experts, key opinion leaders of companies, and stakeholders) and secondary research (global/regional associations, trade journals, technical white papers,
09-16-2020 | Politics, Law & Society
AirMail100 Centennial Flights
Volunteer Pilots Successfully Complete 2,560 Mile Relay Commemorating Centennial …
Fourteen volunteer private pilots from across the country, flying a menagerie of general aviation aircraft, from a 72-year-old North American Navion, built by the same company that produced the famous WWII P-51 Mustang and B-25 bomber, to a sleek, fast Cessna 421 twin, completed a four-day air relay. Their mission: retrace the exact route flown 100 years ago - to the day - that carried the first 400 pounds
09-16-2020 | Advertising, Media Consulting, …
QY Research
Airmail, Market is Booming Worldwide (2020-2026)-Says QYR | FedEx Express, UPS A …
LOS ANGELES, United States: QY Research has published a research report titled, “Covid-19 Impact on Global Airmail, Market Insights and Forecast to 2026".Since the COVID-19 virus outbreak in December 2019, the disease has spread to almost 100 countries around the globe with the World Health Organization declaring it a public health emergency. The global impacts of the coronavirus disease 2019 (COVID-19) are already starting to be felt, and will significantly
06-09-2020 | Politics, Law & Society
EVWORLD.Com
AirMail100 Centennial Flights Project to Retrace Post Office Airmail Route on 10 …
For Immediate Release Omaha, NE (8 June 2020) 100 years ago this coming September, the U.S. Post Office launched its riskiest gambit yet: fly the mail coast-to-coast from Long Island, NY to San Francisco Bay in surplus WWI biplanes that lacked even the most rudimentary navigation and blind-flying instruments. The pilots, made up mostly of former Army Air Service instructors, had only two guides; their compass and the railroad
05-13-2020 | IT, New Media & Software
HTF Market Intelligence Consulting Private Limited
Airmail- A Market Worth Observing Growth | British Airways, Cargolux, ChinaSouth …
A latest survey on Global Airmail Market is conducted to provide hidden gems performance analysis. The study is a perfect mix of qualitative and quantitative information covering market size breakdown of revenue and volume (if applicable) by important segments. The report bridges the historical data from 2013 to 2018 and forecasted till 2025*. Some are the key & emerging players that are part of coverage and have being profiled are
04-02-2020 | IT, New Media & Software
DataIntelo
Email Client Software Market Size 2020 Analysis, Growth, Vendors, Shares, Driver …
The Email Client Software Market report includes overview, which interprets value chain structure, industrial environment, regional analysis, applications, market size, and forecast. This is a latest report, covering the current COVID-19 impact on the market. The pandemic of Coronavirus (COVID-19) has affected every aspect of life globally. This has brought along several changes in market conditions. The rapidly changing market scenario and initial and future assessment of the impact is
Comments about openPR
9 o'clock: discuss press release with client, 10 o'clock: submit release to openPR, within the briefest possible time release is published and displayed in a prominent place on openPR.de. I am thrilled!
Zehra Spindler, Calypso Now! - Communication Agency