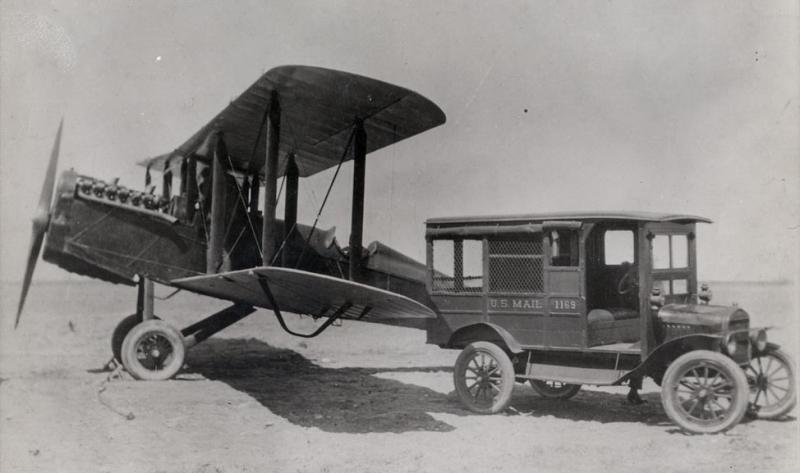 US mail being transferred to DH-4 mail plane

For Immediate Release Omaha, NE (8 June 2020) 100 years ago this coming September, the U.S. Post Office launched its riskiest gambit yet: fly the mail coast-to-coast from Long Island, NY to San Francisco Bay in surplus WWI biplanes that lacked even the most rudimentary navigation and blind-flying instruments. The pilots, made up mostly of former Army Air Service instructors, had only two guides; their compass and the railroad tracks on the ground below. On the morning of September 8, 1920, a single DH-4, powered by a war surplus Liberty engine, lifted off from a grassy runway on Long Island and pointed its nose due west. Four days later around 2:30 PM local time, another DH-4 plane, No. 151 with Eddie Mouton at the controls, bounced across Marina Field on the shores of San Francisco Bay. Reported the Associated Press, “The west was moved 24 hours nearer to the east today…” This coming September, a group of volunteer pilots will retrace the same route, relaying some 5000 commemorative postcards honoring the pilots, airfields and communities that funded and nurtured them. With the support of the Experimental Aircraft Association (EAA) and Airplane Pilots and Owners Association (AOPA), over a dozen private aircraft will fly in relay between 16 airports: five of them originally activated a century ago to support the Post Office and still in service today. The Centennial Flights project is being organized by AirMail100.com with the knowledge of the Smithsonian Institution’s Air & Space and National Postal museums, as well as the National Aeronautics Association. “We seek to honor the memory of the men whose courage, dedication and determination helped propel America from a second-rate airpower at the close of the First World War to the pre-eminent aerospace innovator and builder in the world,” explained Senior Event Coordinator Bill Moore. “So ‘cutting edge’ was the institution of the nation-spanning airmail service at the time that the National Aeronautics Association, founded in 1905, awarded it their prestigious Collier Trophy… twice.” The volunteer project is working with local EAA chapters, airports, chambers of commerce, and Boy Scouts of America. Donations are being sought to fund the commemorative postcards and decals for the airplanes. Information on the route, as well as the history of the airmail can be found on the AirMail100.com website.AirMail100.com 1915 Southview Drive Papillion, NE 68046Contact: Bill Moore bmoore@evworld.com 402.575.8085AirMail100.com is a volunteer effort to commemorate the founding of transcontinental airmail service a century ago.