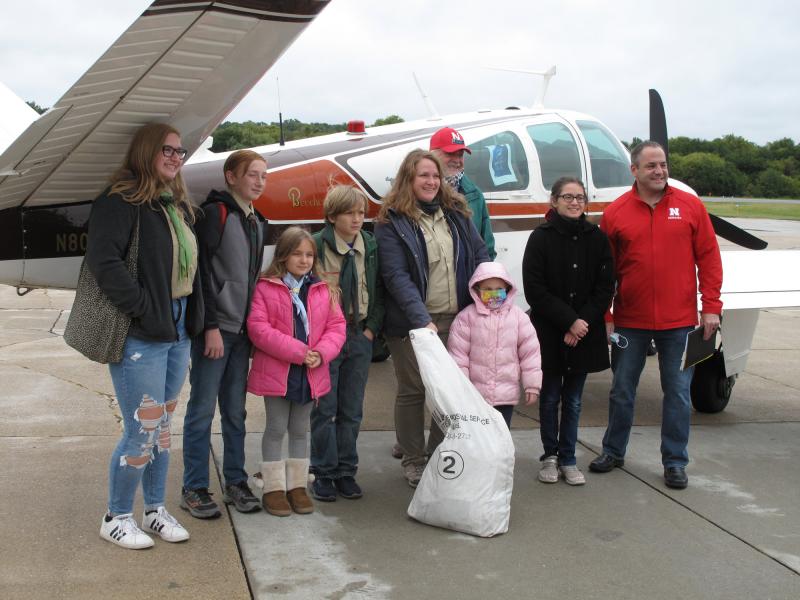 Fourteen volunteer private pilots from across the country, flying a menagerie of general aviation aircraft, from a 72-year-old North American Navion, built by the same company that produced the famous WWII P-51 Mustang and B-25 bomber, to a sleek, fast Cessna 421 twin, completed a four-day air relay. Their mission: retrace the exact route flown 100 years ago - to the day - that carried the first 400 pounds of mail entirely by air from New York’s Long Island to the shores of San Francisco Bay. Along the way, stopping at the same “airfields” used by the 1920 fliers - or as near as possible where those fields no longer exist — they picked up hundreds of commemorative postcards destined to be postmarked in San Francisco, most of them addressed by local Scout troops.AirMail100 Centennial Flights (http://airmail100.com) has been some seven months in the planning, during which it recruited more than three dozen pilots eager to have a part in honoring an important milestone in American aviation history. “It is because of the government’s initial involvement in starting airmail service in 1918 and gradually extending it further and further west that America would soon became a leading force in commercial aviation and aeronautics,” explains Bill Moore, the lead event organizer, based in Omaha. “The September 1920 flight is important because it was the first to link the coasts with regular airmail service.”Starting on Long Island on September 8, 1920 and flying in relays, the final mail plane piloted by E.E. Mouton, reached San Francisco on September 11th.“That was our goal as well.”Moore notes that while some of the AirMail100 pilots had excellent weather for flying, especially the first day, the next two legs from Chicago to Omaha on the 9th were flown on instruments with lines of threatening thunderstorms blocking the route across Illinois and Iowa. Additionally, mechanical “kremlins” forced the next plane out of service and low clouds and ice threatened the leg from North Plate to Cheyenne. On top of that, an unusually early snow storm in Wyoming also threaten the flight.“We found another airplane to replace the stranded one in Omaha and, thankfully, a pilot out of Wyoming came to the rescue for the endangered North Platte to Cheyenne segment. By early on Day Three, we were pretty much back on schedule .” Day Four, the final one, would be more challenging.Clouds, coastal fog, and smoke and ash from California wildfires reaching 10,000 feet, forced the project to abandon its planned stop in Sacramento. This would be the third and final diversion the project had to deal with over the four day event.“The pilot flying out of Reno elected to fly non-stop into Concord’s Buchanan Airport. ‘Monte’ Mouton, the pilot in 1920, did exactly the same thing. So, we’re kind of staying true to history, I guess,” Moore wryly observed. After landing in minimal landing conditions, the pilot, John Sawatzky and his co-pilot Stephen Tucker, drove to San Francisco and at 2:30 in the afternoon, at the exact time and place Mouton landed a century ago, they handed their mail over to San Francisco Postmaster Abraham Cooper. In 1920, it was Postmaster Charles Fay.“Our volunteer pilots did a fantastic job keeping to the schedule and persevering, though they will be the first to admit they had it much easier than their predecessors who didn’t even have maps to guide them. They were just instructed to follow certain railroads and rivers when they could, and keep flying west, when they couldn’t.”AirMail100 expresses its appreciation to the pilots who volunteered, the airports that assisted in the smooth mail exchanges, the Scouts and others who addressed postcards, and, of course, the United States Postal Service, especially on Long Island and the San Francisco Bay, for their support and encouragement.1915 Southview Drive Papillion, NE 68046Volunteer group based in Omaha, NE and San Francisco.

02-22-2021 | Associations & Organizations
AirMail100 Centennial Flights
AIRMAIL 100 CENTENNIAL FLIGHTS PROJECT TO MAKE HISTORIC DONATIONS TO AMERICAN PH …
OMAHA, NE — February 22, 2021 will mark the 100th anniversary of the flight that “saved” the US Airmail. In a daring overnight flight through snow and fog, Omaha-based airmail pilot Jack Knight flew from North Platte, Nebraska to Chicago, Illinois, fulfilling a pledge by then Assistant Postmaster Otto Praeger to fly the mail at night, shortening the delivery time to mere hours instead of days. It is on the

02-16-2021 | Advertising, Media Consulting, …
Fact.MR
Grassfed Market: Industry Trends and Developments 2020-2030 | JBS Global , Creek …
Asia has been a profitable hub for interested meat traders to export livestock until a sudden fall in demand was experienced in quarter one and two of 2020,with the emergence of COVID-19 pandemic. This has majorly affected meat trade from China, where large scale lockdowns in agricultural enterprises have led to an acute shortage of livestock owing to supply chain disruptions. In Europe, the decision to suspend livestock trading was
10-27-2020 | Business, Economy, Finances, B …
HTF Market Intelligence Consulting Pvt. Ltd.
Supplemental Health Insurance Market Next Big Thing by Major Giants Humana, Cign …
A new business intelligence report released by HTF MI with title "Global Supplemental Health Insurance Market Report 2020 by Key Players, Types, Applications, Countries, Market Size, Forecast to 2026 (Based on 2020 COVID-19 Worldwide Spread)" is designed covering micro level of analysis by manufacturers and key business segments. The Global Supplemental Health Insurance Market survey analysis offers energetic visions to conclude and study market size, market hopes, and competitive surroundings.
02-26-2019 | Business, Economy, Finances, B …
The Research Insights
Compressive Study on Burial Insurance Market By Top Key Players Gerber Life, For …
Burial insurance is a type of life insurance used to pay for funeral services and merchandise costs after a death. The policy can be bought online or by telephone without waiting for an insurance-company doctor exam. In fact, burial insurance does not require a medical exam at all. Applicants are asked about age, smoking history and whether they have serious conditions. For some policies, acceptance is guaranteed. Others require a
01-31-2019 | Business, Economy, Finances, B …
Research for Markets
Global Burial Insurance Market Expanding to 2024 with Top Key Players | Gerber L …
The Global Burial Insurance Market report forecasts the size of the market with information on key vendor revenues, development of the industry by upstream and downstream, industry progress, key companies, along with market segment type and market application. This report also comprises of a methodical investment analysis which forecasts forthcoming opportunities for the market players. All the data and information mentioned in this report assists businesses take superior decisions and
12-17-2018 | Health & Medicine
Research N Reports
Long-Term-Care Insurance Market to grow at a CAGR of +6% over the forecast year …
The Long-Term-Care Insurance market is expected to reach +6% CAGR during forecast period 2018-2023.Individuals who require long-term care are generally not sick in the traditional sense but are unable to perform two of the six activities of daily living (ADLs) such as dressing, bathing, eating, toileting, continence, transferring (getting in and out of a bed or chair), and walking. Age is not a determining factor in needing long-term care. About
10-31-2018 | Industry, Real Estate & Constr …
Fact.MR
Global Grassfed Meat Market Projected to Experience Major Revenue Boost during t …
Grassfed meat is sold across various sales channels, predominantly in local stores. The local grocer with sales throughout the New Zealand, mentioned the significant rise in the sales of grassfed meat, particularly grassfed beef since they began selling it a year ago. The company to increase the sales of grassfed meat such as beef to cater to the increasing demand for grassfed meat, grassfed meat in particular. Access Research Methodology Prepared
Comments about openPR
I can't but agree to the positive statements about your portal: easy to use, clear layout, very good search function, and quick editing!
Jens O'Brien, Borgmeier Media Communication