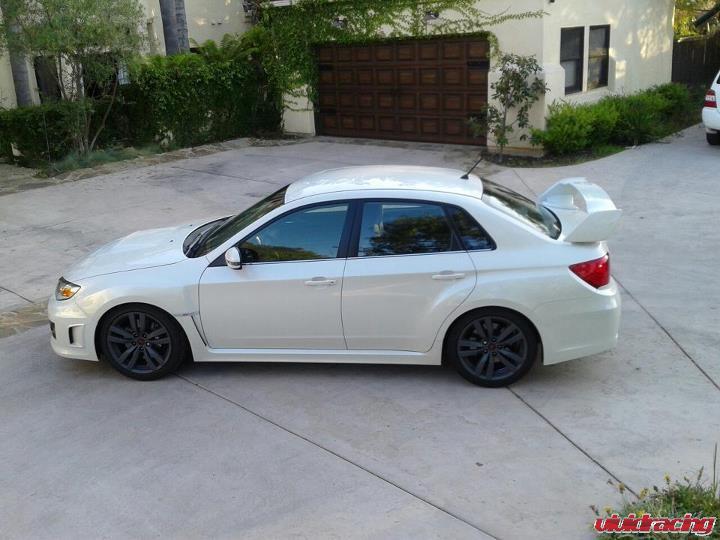 We’re used to seeing Bucky Lasek on a skateboard. You probably played his character on Playstation 2 in Tony Hawks’ skateboard game series. If you ever caught an XGames or Dew Cup on ESPN or NBC, then you have seen him win more Gold Medals in Vert Skateboarding then any other rider. Having been a true car enthusiast with many built vehicles and track races under his belt through the years, this young minded 39 year old is now at the top of his game driving professionally for Team Subaru PUMA in the Global Rallycross Series. If you think all athletes are like what you see on MTV, driving Ferrari’s and other ridiculous cars, think again. In fact, as a true enthusiast and now on Team Subaru, Bucky chose to move away from his 996 Turbo and get a 2012 Subaru STI sedan. The 2.5L turbo sedan in white is a perfect street worthy machine for cruising the streets of San Diego. But Bucky needed more. What separates Bucky apart from others is he gets his hands dirty and likes to show it off. His first round of mods included installing a custom black ceramic coated Agency Power quad tips exhaust. The catback exhaust is a full 3 inch in diameter which sits beautifully out the rear. Because it is a catback, it does not require any tuning with the car. Next he added the Agency Power lightweight crank pulley. Saving close to 3lbs of rotational weight for a mere $100 creates a definite notice in throttle response. Next up were a set of KW Clubsport coilovers. The KW Clubsport feature adjustable height as well as independent rebound and compression settings which are a must for those personal Gymkhana days. In addition, Bucky will be adding a set of Recaro Profi racing seats, some more Agency Power toys, and Seibon Carbon aero parts. We think Bucky will be bringing home the trophies with this one.Agency Power Industries LLC has been bringing unique products and styling to the marketplace for tuner oriented vehicles since 2003. Agency Power was developed out of the need to provide quality, functional, and fashionable racing products. Based out of Gilbert, Arizona, Agency Power has established itself as one the core aftermarket companies for niche tuner products AP parts have been featured in magazines such as Modified, DSport, Import Tuner, Total 911, Bimmer, Super Street, and more.Betty Mermelstein bjmerm@vividracing.com Dan Mermelstein Agency Power Industries, LLC 1429 W. Scott Ave. Gilbert, AZ 85233 480 921-7422

09-11-2012 | Tourism, Cars, Traffic
Agency Power Industries LLC
Product Development from Agency Power Enhances the 2013 Porsche 991
Vivid Racing was able to get its hands on a 2013 Porsche 991 Carrera S to do product development with its sister company, Agency Power. The white color and beige interior are a nice combo with the 7 speed PDK transmission. Instantly noticed is the rear end with the sleeker looking taillights and the decklid. Looking at the decklid, there was only a small 30 by 8
06-20-2012 | Tourism, Cars, Traffic
Agency Power Industries LLC
Agency Power Equips Cole Seely’s Nissan 240sx
Supercross Lites rider, Cole Seely, has other things on his mind when he is not winning races for Honda and Troy Lee Designs… It’s burning rubber! While Cole is out for a serious injury he sustained at the Salt Lake City Supercross event, he has recovered enough to take out his SR20 equipped Nissan 240sx and drift up some fun with friends. As one of Vivid Racing’s Sponsored
05-10-2012 | Tourism, Cars, Traffic
Agency Power Industries LLC
Agency Power Headers for Ferrari 360 99-05
The newest Agency Power exhaust creations are the Ferrari 360 headers that fit the 99-05 vehicles. Made from 304 stainless steel, the headers come either unfinished or with one of two ceramic coatings. Flanges are laser cut for a precision fit. Each header features a highly engineered collector to add additional horsepower and torque. These headers will add almost 25 wheel horsepower and 25 ft/lbs of torque. In addition to improving
04-23-2012 | Tourism, Cars, Traffic
Agency Power Industries LLC
Lamborghini Shows Off Custom Wheels from Agency Power
This Lamborghini Gallardo was shoed with a special 5.2 spoke style wheel through Agency Power‘s custom wheel division. This set of wheels was done in a Titanium Brushed Finished to give the wheel a dark, almost deep, look to it. The front is a 20×8.5 and the rear is a 20×11, fitted to be nice and flush with the fender. The wheels are logo clean and