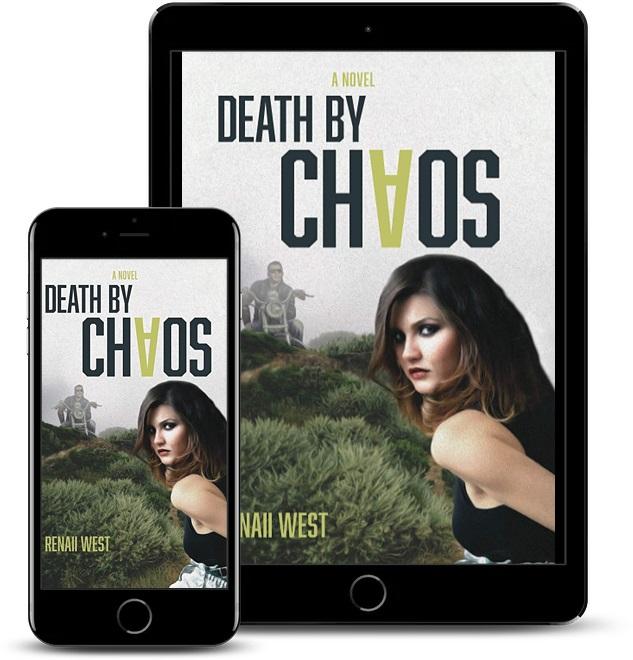 Author Renaii West Releases New Women’s Mystery Novel - Death by ChaosAuthor Renaii West is pleased to announce the release of her new women’s mystery, Death by Chaos.Three women at their 20-year college reunion re-examine details surrounding a death their friend and former roommate supposedly caused.What is it like to handle the exposure of secrets and truths that had long remained hidden or forgotten.Praise for Death by Chaos: “A sublime portrayal of an unfaltering friendship in the face of adversity” - Kirkus Review"A witty and ribald tale, with an outstanding cast of characters and a very clever plot," Kirkus EditorDeath by Chaos is available for purchase in print and ebook formats. Book Information: Death by Chaos By Renaii West Published: September 2020 ISBN: 979-8692019400 ASIN: B08K478KYM Pages: 160 Genre: Women's Mystery, Women's Detective, Women's FriendshipAbout the Author: Renaii West has been writing and performing from an early age. After earning her Bachelor of Fine Arts degree, she became the dramatic arts instructor in a performing arts program, where she wrote and directed many of her own productions. Desiring to spread her creative wings, she is now creating fun-loving and sometimes quirky characters who inadvertently find themselves in the middle of a mystery and must use their wits and cunning to solve the case. Her passions and hobbies include mythology, classic films, travel, belly dancing, yoga, jigsaw puzzles, and, of course, mysteries.Contact: Website: http://www.renaiiwest.com Twitter: https://twitter.com/RenaiiW Facebook: https://www.facebook.com/Renaiiwestauthor/ Promo Link: http://bookbuzz.net/blog/death-by-chaos-by-renaii-west/#mystery #womensmystery #women #DeathByChaos #RenaiiWest #BookBuzzBookBuzz.net 59 Heritage Way Drive Rome, 30165Website: http://bookbuzz.net/blog/death-by-chaos-by-renaii-west/BookBuzz.net helps indie authors, hybrid authors, and small publishers promote and market their books. We also help with book reviews, publicity, and more. Let's Create Some Buzz For Your Book!!!

07-23-2020 | Media & Telecommunications
Digital Oxygen
The Death Of GRX
As big cloud service providers like Microsoft, Amazon, and Google invest heavily in cloud-telco services, one of the most affected businesses will be traditional GRX/IPX providers, finds the recent discussion paper of the Munich-based telecommunications consultancy Digital Oxygen. Munich, July 22th 2020. With their most recent telco acquisitions, big cloud service providers like Microsoft (Azure), Amazon (AWS), and Google (Google Cloud) are showing a keen interest in the further expansion of their
02-07-2019 | Politics, Law & Society
Crowson Law Group
Pedestrian Accident: Wrongful Death Claims
According to the Washington Post on the subject of transportation, an article posted on January 23, 2019 stated that, “Between 2008 and 2017 nationally, 49 340 pedestrians were killed”. The article recorded statements from Emiko Atherton, the author of a study on pedestrian deaths by the group Smart Growth America, regarding a pedestrian danger index created using national pedestrian fatality count data from the period 2008 to 2017.  She stated
09-28-2010 | IT, New Media & Software
Mopits
Mopits.com Launches Death Messaging Service
Mopits.com is a free service that allows users to schedule Tweets, Facebook Updates, emails, and text messages after their death. Mopits releases a free service that allows users to store messages to be released after their confirmed death. The messages can be both private (emails & text messages) and public (Twitter© & Facebook©). Users can schedule the messages to be released minutes, days, months, or years after their death
04-10-2008 | Leisure, Entertainment, Miscel …
Death Clock
Death Clock Launches Advanced Life Expectancy Calculator
Leading website publisher Mark Mitchell today launched The Death Clock, a new website aimed designed solely for entertainment purposes to attempt to predict the user’s date of death by collecting various information about the user’s life. Users will be asked about certain life prolonging health facts, such as smoking habits and BMI, an indicator of body fat percentage, and of course their age. Developer Mark Mitchell commented “This website is purely just
08-15-2007 | Politics, Law & Society
The Girards Law Firm
Settlement Reached in Mr. America Death
DALLAS – The family of former Mr. America Michael Scarcella has settled a lawsuit against Presbyterian Hospital of Plano Inc., following Mr. Scarcella’s death in 2003 after he was transferred from the hospital. Terms of the settlement are confidential. “It’s a small measure of consolation for Michael’s nine-year-old son, who will have to grow up without his dad,” says Jim Girards of The Girards Law Firm in Dallas, who represents the late
05-24-2007 | Arts & Culture
die angewandte
THE DEATH OF TASTE: THE FUTURE OF FASHION
'The Death of Taste: The Future of Fashion' questions the process of fashion-making beyond the simple allure of the catwalk and its designer clothes and accessories. In the 21st century, fashion is a global industry embracing modes of instant distribution that demand an ever-faster turn-over of styles and images linked to emerging fashion tastes. From London to Vienna, through to Russia and Turkey, stylists, forecasters, buyers, designers, post-production artists and
Comments about openPR
OpenPR ist the nicest and most clearly laid out PR platform I have seen to this day. The press releases are displayed very nicely and clearly and without any unnecessary frills. The updates are fast and the finished release looks appealing and is clearly legible. Even with 16 years of experience one discovers new things from time to time. Congratulations!
Gabriele Ketterl, Director Marketing & PR, Menads