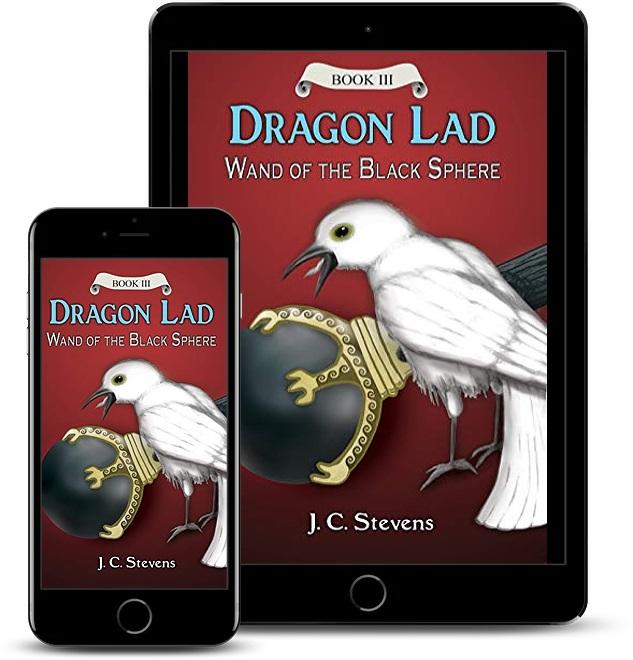 Writer-Illustrator J.C. Stevens Promotes Her Middle Grade Fantasy Trilogy – Dragon LadAuthor and illustrator J.C. Stevens is pleased to introduce her illustrated Dragon Lad fantasy trilogy for readers ages 10 and up."Dragon Lad: The Thirteenth Egg," the ﬁrst book in the Dragon Lad trilogy, debuted in 2015. "Dragon Lad: Tale of the Talisman," followed in 2017, and the third and ﬁnal book, "Dragon Lad: Wand of the Black Sphere," was published in 2019.Dragon Lad is a shapeshifting magic fantasy adventure ﬁlled with dragons, witches, wizards, fairies and fun, but there are deeper messages as well. Important themes include respecting nature, accepting those who are different - including one’s own self - and transforming mind and soul as well as body into something better.The trilogy starts off with Dorg, a dragon who hatches tiny due to a magic curse, tries to end the curse, and discovers something amazing about himself. In the second book in the series, the hero tries to unravel the secret of his past using only a single clue: the talisman his dragon mother wore when she laid the egg that contained his dragon self. In the third book, the hero and his human and dragon friends duel the shapeshifting sorceress who eluded them in the second book. He learns the value of truth and the importance of friends with the courage to fight for it. Dragon Lad: The Thirteenth Egg Publisher: Dragon's Egg Books ISBN: 978-0996383905 ASIN: B00YBE0M9A Pages: 23 Genre: Middle Grade Fantasy Dragon Lad: Tale of the Talisman Publisher: Dragon's Egg Books ISBN: 978-0996383936 ASIN: B0778WX4NP Pages: 235 Genre: Middle Grade Fantasy Dragon Lad: Wand of the Black Sphere Publisher: Dragon's Egg Books ISBN: 978-0996383981 ASIN: B07ZXL3WQX Pages: 238 Genre: Middle Grade Fantasy. All three books are available for purchase in print and ebook formats. See the series at https://www.amazon.com/J.-C.-Stevens/e/B013VYK76I About the Author: J. C. Stevens began writing ﬁction, nonﬁction and poetry at age ﬁve. The author's ﬁrst and favorite stories were about ghosts, witches and other spooky creatures. As an adult, Stevens served as a newspaper reporter, editor and teacher. Stevens lives in Southern California.Contact: Website: http://www.dragonseggbooks.com Facebook: https://www.facebook.com/profile.php?id=100009147812465 Promo Link: http://bookbuzz.net/blog/mg-fantasy-dragon-lad-wand-of-the-black-sphere-by-j-c-stevens/#DragonLad # JCStevens #MiddleGrade #Fantasy #Elves #MGFantasy #BookBuzzBookBuzz.net 59 Heritage Way Drive Rome, 30165Website: http://bookbuzz.net/blog/mg-fantasy-dragon-lad-wand-of-the-black-sphere-by-j-c-stevens/BookBuzz.net helps indie authors, hybrid authors, and small publishers promote and market their books. We also help with book reviews, publicity, and more. Let's Create Some Buzz For Your Book!!!

02-23-2021 | IT, New Media & Software
Cullens media
The New Dragon Programming Language
Dragon is a new programming language and it is growing quickly. Dragon is a high-level dynamic programming language. It is created by Aavesh Jilani. He is an Indian programmer. It was first released in the year 2018. According to the users, it has a promising future. The current version is Dragon 1.9.8 and previously released. Although it's not much famous as other programming languages. But the creator has published
03-21-2017 | IT, New Media & Software
Digisonics
Digisonics Shows Compatibility with Dragon Medical One for Structured Reporting
Digisonics streamlines the structured reporting workflow by offering physicians and clinicians the best of both reporting techniques, a structured reporting system that enhances and standardizes data collection, quality initiatives, metrics compliance, and AUC criteria, combined with very best cloud-based voice recognition solution. Nuance, a leader in clinical voice dictation software, has introduced their cloud-based release of Dragon Medical One, which includes a simple interface on the computer desktop for speech input
07-21-2016 | Fashion, Lifestyle, Trends
Rastaclat
Rastaclat Celebrates Bruce Lee's Life with Exclusive Dragon Bracelet
Bruce Lee is back. Rastaclat teams up with Bait and Bruce Lee Enterprises to create the 2nd Collaboration Bruce Lee Bracelet inspired by the legendary film Enter The Dragon. The collaboration was inspired by Bruce Lee's constant positivity and trend setting self-expression. He taught us that anything is possible when we live courageously, live authentically and live to our potential. "Always be yourself, express yourself, have faith in yourself." -
05-22-2013 | IT, New Media & Software
eFusion MMOG GmbH
Dragon Nest Europe: The Battle Continues
Mare Oblivion - Update brings new zone, farm system and a mighty enemy Eschborn, 15th May 2013: Players of the Action MMO Dragon Nest Europe now have to face their biggest challenge yet. With the third major patch, publisher eFusion introduces, among other things, the Nest of the Sea Dragon, a farm system and new items. The birth of an abomination Fifty long years he was resting, but now he has risen
07-03-2012 | Fashion, Lifestyle, Trends
Tat2X
Tat2X Unleashes The Tat Gear Dragon!
The dragon has been a part of Chinese culture since 3,000 BC and symbolizes power, strength and good luck. Many Asian societies worship the dragon as the divine ruler of lakes, rivers and seas. The Chinese declare themselves the living descendents of the dragon and their emperors sat on “Dragon Thrones.” For them the dragon is a serpentine or snakelike combination of many animals that lives under
01-11-2012 | Leisure, Entertainment, Miscel …
China Blossom Restaurant and Lounge
Year of the Dragon Chinese New Year Celebration!
WHAT: On Sunday, January 29th, 2012 from 4:00PM to 7:00PM, China Blossom, located in North Andover, MA, and the Andover Chinese Cultural Exchange (ACCE) will celebrate the Chinese New Year with a festival sponsored by Yang’s Martial Arts. The Chinese New Year celebration is centuries old and the most important of the traditional Chinese holidays. More than
Comments about openPR
Your portal is fast, simple, and easy to use. Others may have more functions but they also demand more editing time, you have to preformat the text in order to achieve a good result etc. I think openPR is really fantastic!
Andreas Knepper, wallmedien AG